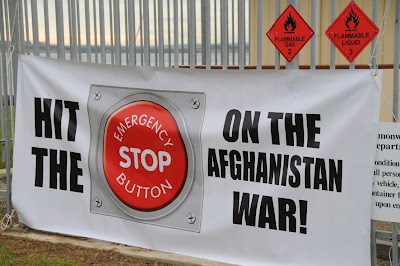 While Australia’s political class and media were obsessing over leaks from within the Labor cabinet this week, an altogether more important set of leaks found its way to the front pages of newspapers worldwide. Sourced by Wikileaks, over 90,000 military documents around the war in Afghanistan were released simultaneously by The Guardian, The New York Times and Der Spiegel. They catalogue a litany of imperial hubris, mismanagement and callous disregard for the people of a country that seems to have little time free of foreign occupation.

The Wikileaks story only made it to prominence in our local MSM later in the week, and then often in the form of criticism of the damage it could do to the West’s war effort (surely it’s a bit churlish to agonise over leaks costing soldiers’ lives when the war itself is the problem). The two major parties have studiously avoided the issue and the Greens, despite opposing the occupation, have also been silent to date.

If anything this again demonstrates the incestuous logic of elite opinion on the war, which is entirely hived off from consistent (and longstanding) public support for withdrawal of the troops. For a long time opinion polls on the war were simply noted and passed over as journalists and politicians talked of the need to “stay the course”. More recently there has been acknowledgement of the war’s unpopularity and yet coverage is marked by nationalistic homilies to dead soldiers who were, despite all appearances, “men of peace”. Even Bob Brown seems to feel the need to colour his anti-war stance with praise for the great job “our troops” are doing over there—which perhaps explains his inability to download the import of the Wikileaks revelations, damning as they are of the job “our” military is doing.

Which brings me to the Paul Greengrass actioner, Green Zone, an entirely appropriate DVD to see this week. Loosely based around the fraudulent WMD intelligence fed to New York Times reporter Judith Miller in the run-up to the 2003 invasion of Iraq, the film follows a decent US soldier (Matt Dillon) whose job it is to find the WMD based on the intelligence. When none turns up he gets drawn into tracking down the alleged source of the information, a powerful Iraqi general, and realises that sections of the US military establishment (led by Greg Kinnear) have cooked up the WMD claims to keep their masters in Washington happy. The journalist in the film (Amy Ryan), like Miller, initially accepts the veracity of the intelligence because it comes from so high up the chain of military command. Wikileaks’ Julian Assange has pointed out that this faith in “verifiable sources” rather than verifiable information is what has characterised official criticism of his site’s efforts this week. Green Zone demonstrates why we should place more trust in Wikileaks than high-profile journalists deeply embedded inside the US war machine.

But there ends the value of Green Zone, because its critique of the Iraq War is emasculated by an inability to break free of public justifications for war aside from the WMD charade. It doesn’t even hint at what the war was about. It certainly doesn’t suggest it might have been the (now failed) grand strategy of a declining but still hegemonic superpower to shore up its pre-eminent position in the world order—in large part by securing control of global capitalism’s most important resource commodity. Perhaps for some this weakness is hidden behind the fashionably cynical and ambivalent closing scene, when suddenly the interests of the Iraqi people seem to come into view, but the film as a whole develops without serious questioning of what really happened and why (right down to the almost silly invocation of “good” CIA operatives who wanted a more orderly invasion).

Green Zone reminded me of Slavoj Zizek’s recent complaint that we are currently suffering from “anti-capitalist overload”, where every piece of popular culture seems to have a stab at evil corporations, governments and militaries, yet we are no closer to seeing a systemic critique. This mirrors mainstream debates about the causes of the global economic crisis, which reduce what was a systemic breakdown to contingent and/or extrinsic factors—an unregulated financial sector, greedy bankers, even “anti-racist” lax lending rules that allowed poor US Blacks to buy homes they shouldn’t have been allowed to even dream of. I think Zizek is wrong to call this overload “anti-capitalist”. Rather, it is an overload of apologias for the systemic and structural elements of our current predicament, dressed up as knowing, radical critique.

It is a symptom of the degeneration of mainstream Australian political debate that it cannot even rise to the level of Green Zone’s “apologist overload” in its response to the Wikileaks revelations.