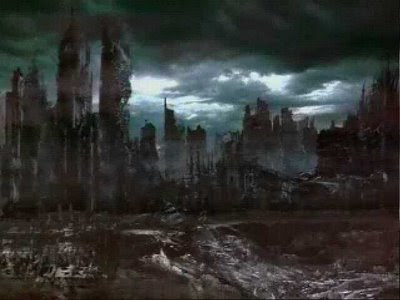 If postmodernism represents the philosophical and aesthetic logic of late capitalism, then we have certainly scored ourselves the ultimate postmodern election. Fragmentary policy announcements, a lingusitic turn on the messaging front and, of course, such self-reflexive narratives that it’s hard to tell what is “real” anymore. Actually, hold that thought, because there is nothing real, just the bubble of the official discourse, however shifting and indeterminate that seems.

It has now reached the stage of madness, where the ALP’s recent addiction to focusing on the process of politics rather than politics itself (who would name their campaign Kevin07 if they wanted people to take politics seriously, after all?) has morphed into the bizarre spectacle of a dual prime ministerial assassination. I refer, of course, to that “first as tragedy, then as farce” double entendre; the sudden dumping of Prime Minister Kevin Rudd followed by the even more sudden dumping of Prime Minister Fake Julia Gillard*. Not only is Ms Gillard Mk II providing knowing metacommentary on how she has replaced her former self (in case we miss what has happened), but the murder of her own evil twin is itself a metacommentary on how she knifed Rudd.

Yet there’s a serious point to all this, mostly missed by the commentariat. The reality is that this election is being run, more than ever, on the unspoken but widely accepted assumption that it doesn’t really matter who wins because what governments do has got little to do with the decision made by ordinary people when they cast their votes. Late capitalism, or neoliberalism, has done more than implement a “restoration and consolidation of class power” through simple economic redistribution. It has done so through a conscious policy of greater and greater encroachment of the logic of the system, in particular markets and economic competition, on every aspect of life.

By doing this, all collective and fundamentally democratic impulses have had to be attacked, whether openly (e.g. Thatcher’s “there’s no such thing as society“) or more insidiously (e.g. pushing market principles within the functioning of public services in the name of “quality” and “efficiency”). Despite the individual freedoms this change was supposed to liberate, it has led instead to a growing bureaucratic micro-management of every aspect of ordinary people’s lives, because the anarchy of the market inevitably leads to despotism in the workplace (and school and hospital and even home). This is reflected in growing dissatisfaction in the workplace, despite headline economic figures appearing to indicate we’ve never had it so good.

In the neoliberal mindset, none but the most perfunctory social decisions can be made independent of an apparently external market logic, thus downgrading the importance of democracy. This phenomenon first became apparent at the state level in Australia, as governments (mainly Labor) reduced their mission to something analogous to managing a business, devoid of any consideration of variegated social interests (apart from those of the boss’ bottom line). Increasingly dismissive of any social base for their actions, they came to project their role as one of a technocratic fix. That this fix was implicitly in the interests of the business class was elided with talk of a post-ideological era. The ideology of the day was that there was no ideology anymore.

“Politics” didn’t just stop being about “policy”, as some perceptive commentators have noted in recent times. Rather, not even “policies” were about real politics anymore, if politics is to be understood as being the agency of real social actors, competing with each other for advantage or hegemony. Politics is reduced to the intrigues and games politicians play to get their way, usually to cleverly maintain the consent of the allegedly stupefied masses in elite projects. Nothing is more stark in this respect than the sowing of racist divisions over asylum seekers and population: it’s the politicians saying that while they will continue acting in the interests of a tiny, mega-rich minority, we need to lay the blame for our dissatisfaction on the most powerless, marginalised and oppressed people in our society.

The Rudd-Gillard era in federal politics is merely this logic taken to an extreme conclusion. Elected riding the wave of a genuine political struggle over WorkChoices, one that inspired and drew into activity hundreds of thousands of people, Rudd remained an anti-political technocrat at heart, although one who recognised the need to connect with a rising progressive impulse. Yet the problems he wanted to address, apart from those that could be largely handled symbolically (e.g. the Apology) were too weighed down by real politics to be fixed in this way.

Climate change was the ultimate paradox for Rudd: a problem that will affect us all but that is contested on an apparently irrational denialist basis. Yet denialism is perfectly rational from the standpoint of the interests of the economic actors who have most to lose from a rapid transition to a decarbonised economy. When the global economic crisis hit, the increased competition between the major capitalist states cruelled even the modest and inadequate progress promised by the Kyoto Process. Above all, climate requires a political solution, and one that will involve challenging powerful interests. Rudd’s failure also signalled the exhaustion of his technocratic agenda.

Without this figleaf, Labor’s lack of any kind of real political programme has been laid bare, and all that is left to cover it is an increasingly desperate recourse to stunts, rapid-fire photo opportunities, and smoke and mirrors exercises. Abbott similarly has no coherent agenda to present, with the Liberals either recycling or disavowing Howard-era ideas on one hand, or pushing apparently left-wing arguments against Labor on the other (most spectacularly with the parental leave tax on big business, but also attacking School League Tables and misuse of NAPLAN testing).

If there has been one true highlight this campaign, it was Bob Brown’s often rambling speech at the Greens campaign launch in Canberra on the weekend. Reinvigorated, passionate and sounding like an old-fashioned social democrat with an ecological tinge, Brown raced through a series of left-wing policies, many of which may not have sounded like much but together acted as a cohesive riposte to the postmodern game that masquerades as politics these days. That some otherwise perceptive commentators wanted to write the speech off (see here, paywalled, and here) reflects how entrenched the meaninglessness of official politics has become.

For the political Left, there is a need to stop being trapped within this discourse, unable to perceive what may lie outside. To many, the collapse of the Gillard campaign is seen as a terrible victory for the forces of darkness embodied in Tony Abbott. But I would suggest that the political crisis of 2010 is more accurately defined as the political class and its hangers on being welcomed into the desert of the real.