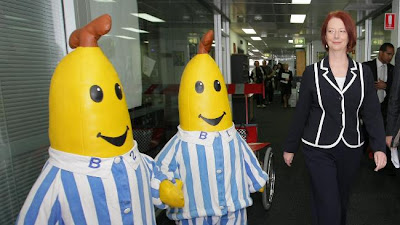 When we started this blog in July, we addressed the “democratic deficit” in Australian society. Yesterday’s result, of a likely hung parliament, is a reflection of the inability of the main parties to even create the illusion they have won a mandate to govern.

The election was a disaster for the ALP. Having killed the sense of progressive hope that gave him a landslide victory, Rudd was knifed by a party who ultimately did the same to remaining hope. This was Gillard’s function, to triangulate Abbott by simply appropriating his most noxious policy positions. In doing so she legitimated his right-wing agenda and gave him a veneer of respectability that many had thought impossible. Even in those late moments when the ALP tried to speak to its working class base, their campaign could offer only piecemeal reforms that didn’t fit into its neoliberal narrative. And while sympathetic commentators managed to get Gillard to recognise, “It’s the economy, stupid,” the stimulus tale of massive state intervention didn’t sit logically with the rest of the party’s fiscally conservative image, focused on how responsible their spending would be and how little they could give their base because of the pressing need to get back into surplus.

But while Abbott can savour some hubris for the moment, the election was hardly an endorsement of the Liberals’ contradictory grab bag of policies in search of a program. Memories were not so short that swing voters were willing to get back in bed with the conservatives on a sufficient scale, despite Gillard’s best efforts to wedge her own side. Abbott has one thing on his side, and that is his message of seeking to provide “stable, predictable and competent” government. Already elite commentators calling for a solution that will ensure that the ASX and corporate interests are protected, and suggesting that the conservative independent MPs get behind this project. This is the “stability” they desire, calm domestic waters for a capitalist class nervously watching the global crisis spread its tentacles ever closer to our shores.

So what of the Greens? Despite a lower vote than predicted by some opinion polls (which any sensible insider knew would occur in such a tight race) the party gained a massive swing by positioning itself clearly to the Left of Labor. For a significant and growing minority, the Greens have filled the vacuum left by Labor’s long march to the Right and have provided hope of a revival of progressive reformist politics—and perhaps something even a little more radical than that. As Bob Brown said last night, this is the start of “a new movement”. Or is it?

The Greens’ aim of representation in the Senate in every state was realised, but the cherry of the first lower house seat at a general election tells a further story. Even with a hung parliament in the air, and an extensive fear campaign from Labor campaigners in the seat, Adam Bandt won the support of locals and with Liberal preferences won Melbourne by a large margin.

The crisis of political representation has produced an electoral impasse that the major parties suggest will be resolved through parliamentary machinations to achieve a stable coalition with some like-minded independents. Despite the democratic result, the MSM is already baying, like the Thunderdome crowd in the third Mad Max movie, “Two men enter, one man leaves!” And they will want their blood.

But politics is about more than parliament and the MSM, as shown by Bandt and the Greens in Melbourne. This is not another edition of Thunderdome. The forces that can resolve the impasse decisively lie beyond and outside the arena of parliamentary logic. Whatever fragile “stability” might be achieved by the politicians, the chill winds of economic crisis and growing class polarisation will ensure that it can only be temporary and illusory. The question for the Greens is whether they can take their ability to garner supporters in gentrified progressive seats like Melbourne and Grayndler into the ALP’s heartland and working class base that is so disaffected by their traditional representatives.

Jeff Sparrow posts on the Overland blog on a similar theme:

It’s clear now, if it wasn’t already, that the immediate future of progressive politics lies outside the parliamentary sphere. Whatever unholy combinations take shape in Canberra (let me say again: Bob Katter!), what really matters now is the determination of people to organise, to campaign and to protest.