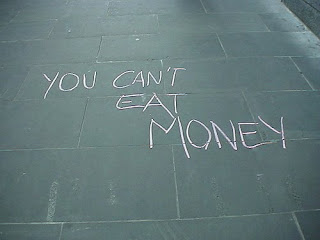 Yesterday was ten years since thousands of Australian blockaded the Asia Pacific Summit of the World Economic Forum at Crown Casino in Melbourne. You can read my blog post about our s11 and the impact of the 9/11 terrorist attacks at the Overland Journal Blog (and reprinted below).

Ten years ago today, at 6 am in the morning, I was sheltering from rain at the Crown Casino in Melbourne. The Victorian government had built an enormous fence to stop protesters from disrupting the Asia Pacific Summit of the World Economic Forum, which had strolled into town to hold what Alexander Downer termed a ‘Business Olympics’. Drenched, I was (silently) contemplating if this was all an enormous mistake and whether the claim that Seattle could come to Melbourne was no more than fantasy. I should not have doubted. As the blockade that day stopped over 200 delegates from attending the WEF, and resulted in the dysfunction of the Summit, I felt simultaneously enormously powerful and fantastically tiny amongst the many thousands who were there.

Francis Fukuyama declared in the closing decade of last century that the fall of the Berlin Wall signalled ‘the end of history’ and the absence of metanarratives that could challenge liberal free market hegemony. Yet it was barely a decade later that Teamsters and turtles met on the streets of Seattle in a movement that challenged the paradigm he had outlined, and not much later that an extremist fragment of political Islam took such dramatic action that their message about American hegemony would become a defining point for a generation.

For a brief moment between the anti-WTO protests in Seattle and the September 11 terrorist attacks in New York and Washington, a global social movement stood on the world stage to argue that ‘another world is possible’. Protests at various elite summits focused the political debate in the North on questions of equity and justice, issues that had long confronted the developing world and those who experienced the negative impacts of neoliberalism. The media talked of a new politics.

In Melbourne 11 September 2000 – s11 by activists – involved a blockade of the Crown Casino to stop delegates accessing the venue. It publicly displayed a large network of people concerned with the issues of globalisation, free trade, labour rights, the erosion of democracy and the power of multinational corporations. It was in that moment that the Global Justice Movement in Australia cohered and developed its collective identity. Some argued it was a new kind of activism and politics based as much around culture and self-expression as it was around issues and agendas. Others saw it as a newly reinvigorated and contextually specific return to ‘first principles’. At that time, it was near impossible to pick up a major newspaper without reading articles about the concerns of the ‘anti-globalisation’ movement.

Nine years ago tonight I was back in my childhood bed. My life was a whirlwind of activity as I was preparing to move from Melbourne to Sydney for the second time in my life. I was slightly distracted, but the Global Justice Movement was gathering momentum in Australia and I was working hard organising a protest at the upcoming CHOGM meeting in Brisbane. Although my brother and I had left the family home some time ago, we were both staying there while our mother was away. Up late watching soccer, my brother was the first of us to see the collapsing twin towers on news broadcast. In a dazed state he came to wake me and for some time we sat together, stunned, watching incredible images beamed from New York City to a suburban Melbourne house. Very little was said. Then the phone calls began.

The GJM in Australia is not necessarily the longest surviving social movement of recent years, or even the most high profile, but its anti-systemic nature makes it of critical interest to activists and political wonks alike. s11, like Seattle before it, was in part possible because of the disappearance of the geopolitical binary represented in the politics of the Cold War era. After the collapse of the Berlin Wall in 1989, the global political space changed as the dominant frame of East/West lost its relevance. When 9/11 and the War on Terror occurred, global elites resurrected the notion of the so-called ‘clash of civilisations’: a binary of the civility of the west / incivility of terrorists and those who harbour them. This new binary was used both to demonise the ‘uncivilised’ and to attack the GJM as being against ‘progress’.

It was in the decade or so in between – between the Cold War and the Clash of Civilisations – that critiques developed revealing power relations intrinsic to global economic organisation in the epoch of neoliberalism. These were centred on criticism of the Washington Consensus, corporate-led globalisation, and commodification of everyday life. The alternative frames that emerged illuminated the more fundamental geopolitical relations inherent to capitalism.

However as our s11 and Osama’s 9/11 show, counter hegemonic movements do not develop in a simple, linear fashion. They are permeated by the ruling factions’ ideas and agendas and subject to the impact of world events. Internal differentiation is struggled with. With the disintegration of the War on Terror and the retreat of American Empire, and now the collapse of neoliberal hegemony in the bonfires of the Global Financial Crisis and ensuing Great Recession, a new space is again opening up for anti-systemic critiques and visions of alternative worlds. The stultifying consensus among our political and economic rulers has reached an impasse, expressed even in the relatively quiet economic waters of Australia with a hung parliament and elite frenzy that their project is under threat.

At 6 am today, on the anniversary of the s11 demonstration, I woke up to finish the final chapter of my thesis about the Global Justice Movement in Australia. But also to wonder why I did not finish this blog post earlier. To everyone who was at the s11 blockade and to each person inspired by the footage on the news that night: Until next time my friends, we still have a world to win.