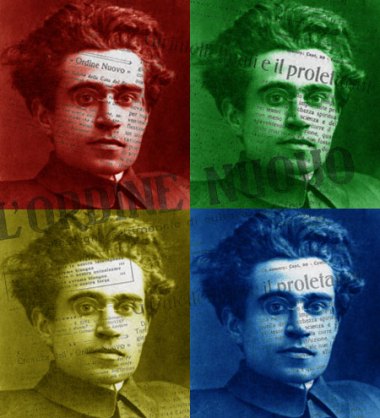 As I blog this, liz_beths is writing the conclusion to her Masters thesis, which analyses the rise and fall of the Global Justice Movement in Australia. She wrote a bit about the arc from S11 2000 to 9/11 and the present day on the Overland blog last weekend. Rather than simply re-use hackneyed categories that have confused the Left when faced with apparently non-class-based movements, she’s gone back to Marx and Gramsci to develop some fresh ideas about social movements in general and the nature of activists’ intellectual and practical activity in particular.

Parallel to the anti-capitalist movements of the last decade there’s been a revival of Marxist theory, and a flowering of interest in Antonio Gramsci. As wrongarithmetic rightly suggested here the other day, we should be trying to build a new Left not rebuild an old one because, after all, that old Left helped get us in the current mess. Gramsci is very helpful to this process because he too was reflecting on the experience of defeat, that of the Italian Left after WWI. The Italian working class had shown revolutionary potential in the Biennio Rosso of 1919-20 before being decisively routed by Mussolini’s fascisti.

Part of the problem, as Gramsci saw it, was that Marx’s insights had been subject to misappropriation and revision from various thinkers, both sympathetic and unsympathetic, rendering them sterile and formulaic. Approaching the problem through a critique of Italy’s leading liberal philosopher, Benedetto Croce, he developed the idea of a “Philosophy of Praxis”, a living unity of ideas and action that arose from the experiences and debates of counter-hegemonic movements.

As Wolfgang Fritz Haug makes clear, the term “Philosophy of Praxis” was a conscious rejection by Gramsci of any idea that he was simply extending some unbroken chain of “Marxist” theory. Even while writing from inside a fascist prison, Gramsci was rebelling against the disastrously mechanistic conceptions being retailed by his own Italian Communist Party (PCI) and the rising tide of Stalinism. After his death, the PCI published his Prison Notebooks with the claim that “Philosophy of Praxis” was a simple synonym for “Marxism”, used to “camouflage” Gramsci’s intentions from prison censors. Such an interpretation, Haug shows, is untenable.

Haug carefully locates Gramsci’s writings in their social and political context, a task carried out on a grander scale by University of Queensland graduate Peter Thomas in his breakthrough The Gramscian Moment. liz_beths and I saw Thomas speak on a panel at the Historical Materialism conference in Toronto earlier this year, his thesis having been released as part of the Historical Materialism book series (and to be a Haymarket Books paperback next year).

Here he is summarising how Gramsci provides a clear, sophisticated and non-reductionist view of social change and class struggle. Rediscovery of this kind can be a very useful thing when we want to avoid “rebuilding” the mistakes of the past.