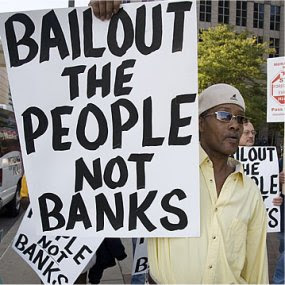 The term deregulation is something of a misnomer, since no system in which the public is the ultimate guarantor can be regarded as unregulated.

And this from In and Out of Crisis, Greg Albo, Sam Gindin and Leo Panitch’s take on the GFC and Great Recession:

The financial crisis that began in 2007 spawned a series of interventions by the US Treasury and Federal Reserve over the course of the following year as the scale and scope of the crisis became more and more clear. Finally, amidst a dramatic series of bankruptcies and takeovers during the course of a week in September 2008, the US government undertook to buy virtually all the illiquid assets on the balance sheets of financial institutions in the US, including those of foreign-owned firms. The Fed and Treasury needed to act not only as lender of last resort, but also, by taking responsibility for buying and trying to sell all those securities that could find a value or market in the current crisis, as market maker of last resort…

The fundamental relationship between capitalist states and financial markets cannot be understood in terms of how much or little regulation the former puts upon the latter. It needs to be understood in terms of the guarantees the state provides to property, as measured above all in the promise not to default on its bonds — which are themselves the foundation of financial markets’ role in capital accumulation…

It might be thought that the exposure of the state’s role in the current financial crisis would once and for all rid people of the illusion that capitalists don’t want their states involved in their markets, or that capitalist states could ever be neutral and benign regulators in the public interest of markets. Unfortunately, the widespread call today for the American state to “go back” to playing the role of such a regulator reveals that this illusion remains deeply engrained, and obscures and understanding of both the past and present history of the relationship between the state and finance in the US.

*Also worth reading for its detailed account of how out-of-control private health insurance costs in the US led to the crisis of the Detroit auto manufacturers.