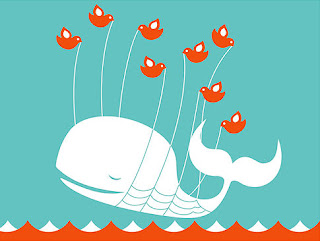 In June 2009 I found myself deciding what my Twitter username would be.

What bought about this change in attitude? Well, Grods, if you must know. Scott made the announcement that Bron had signed up. She had previously been as vocal as I had about the obviously pointless act of being part of the Twitter masses.

We were both wrong.

I hear time and again that it’s an exercise in vanity. That no one wants to hear what you had for breakfast; updates are narcissistic; the tedious chatter isn’t worth your time.

Yes, following celebrities* is amusing at first but with the occasional exception they are quite repetitive and dull. Most politicians aren’t much better, with many leaving the updates to staffers who will only make scheduling announcements. Malcolm Turnbull is the perfect example of a politician who uses the medium well, and if you mention Tony Burke to any politics obsessive on Twitter they’ll probably reminisce about #tweetlikeTonyBurke at its height.

But Twitter is more than 140-character updates or a way to find out what Trent Reznor thinks of Bono. It’s a conversation between friends. We provide support for each other in small bursts of words; we share each others’ joy and heartbreak. We have fun. We share information and provide assistance to those in need. A few weeks ago, a much-loved Twitter user was incredibly intoxicated and was tweeting as he was walking home. One of his followers took pity on him, picked him up and took him home safely. That is the kind of kinship online communities provide.

I’ve conversed with people who I would otherwise never have met. Twitter, the internet**, redefines friendship. I no longer refer to my offline life as IRL; Twitter is just as real. It may seem peculiar to anyone who isn’t familiar with the camaraderie that evolves from social media — how can people who have never met in person be friends? Well, one of the wonderful things about human nature is that we seek out meaningful connections with those we don’t know face-to-face. Our parents had pen-pals — people they’d never met in person — they’d write to each other, talking about their lives. Are the friendships that are formed via pen and ink communication superior to those we form online? I don’t believe so.

I’ve met some of my Twitter-pals in the flesh. They’ve been just as fantastic in person as they are when they’re talking to me from another part of the country. One of the most important people in my life is someone I met on Twitter — you know him as NerdBoy but I first knew him as @thewetmale. Twitter meet-ups are quite common. Events such as BTUB help Twitter users connect on a grand scale but there are other social gatherings are less formal and are done as a shout-out to your followers.

For someone like me who is very shy, Twitter can be liberating. By the time I meet someone in person I feel I know them well enough to feel comfort in their presence that I wouldn’t if we had never spoken. I feel a sense of connection to those with whom I interact on Twitter, a certain level of care.

We even watch television together. On Monday nights you’ll find a gathering of nerds tweeting about Four Corners, Media Watch and, QandA.  On a Sunday morning my stream is full of talk about Insiders.  During the election, Twitter was a heaving mass of information, and on the day of the election people were tweeting about fake how-to-vote cards (among other things).

I’m speaking purely about the social benefits of Twitter here, but people do use it for other purposes — marketing is quite common. There are also the “bots” (spambots) that might flood your replies stream with comments or re-tweets because you simply mentioned a few key words. These can be ignored or blocked. Some bots follow you — again, ignore or block, the choice is yours.  There is a project currently underway, run by Jean Burgess, Axel Bruns and others, studying the use of social media such as Twitter, YouTube and Flickr.

For me though, Twitter has had an impact on my life for the better. I may not be on there all the time, I may sometimes have mini-tantrums or breakdowns, or I’ll rock up in time to join in the fun of the latest meme (#tweetlikeTonyBurke being one I’ve already mentioned), but I do feel it helps both myself and others form connections that may have positive effects well into the future***.

I think that makes it worth it.

* Defined, in this instance, as people who have made a name for themselves in the field of entertainment – movies, books, television
** Anyone who has a blog with regular readers and commenters will understand this. I’ve made some great friends from blogging — and yes, I’ve met some offline.
*** Although sometimes, just sometimes, it can all go horribly wrong. (NSFW — nerd nudity)