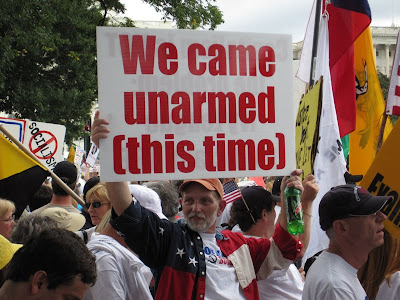 Despite shock being professed around the world, the shootings in Arizona over the weekend shouldn’t be surprising. The United States stands out for its high levels of political polarisation in a rich, industrialised country, and as Gary Younge points out, this polarisation has reached new highs during the presidency of Barack Obama. It is this that provides the context (if not the cause) for the act of political violence — we’d call it “terrorism” if it wasn’t a White American doing it — in Tucson.

The rise in far Right extremism is in part a product of the growing turn by sections of the Republicans, especially those around the Tea Party movement, to develop an extraparliamentary base from which to mobilise electoral support. This has fed the confidence of more radical groupings intent on using political violence to achieve their ends. A US Department of Homeland Security report [pdf] has identified the combination of several factors as underpinning the increase in far Right activity, in particular the economic downturn and the election of an African-American President. In addition they identify legislation around illegal immigration and gun control as weather vanes around which extremists can rally support.

There is often little to separate the words of Republicans like Sarah Palin from the propaganda and actions of militaristic quasi-fascist fringe groups. Such rhetoric makes a mockery of statements by leading Republicans trying to dissociate themselves from any responsibility in creating such a climate.

That, really, is the liberal critique of what’s happening. Fine as far as it goes, but it can too easily collapse into boosterism for Obama, who is about as right-wing a modern Democratic president as you could imagine, seemingly intent on building his reputation by giving in to big business and Republicans demands before any debate has even started. Or it can be the basis for suggestions that the problem is “extremism” in general, and that all we need is sensible, centrist politics (the basis of the recent Colbert-Stewart “Rally for Sanity”).

As central as the rise of the radical Right is to the current situation, more attention must be paid to the processes in mainstream US society and politics that are driving it.

No crisis for the neoliberal elite

Behind the political polarisation is a sharpening of economic and social polarisation in the wake of the severe downturn in the US economy that began in 2007 with the subprime crisis. Not only has the recession driven up unemployment, it has given confidence to bosses to ramp up pressure on workers still employed, and left many ordinary Americans facing repossession and homelessness. The number of those out of work for over a year skyrocketed from 645,000 in 2007 to 4.5 million by mid-2010. Reports of workplace bullying and harassment have increased sharply.

In this process the capitalist elites widely seen to have caused the crisis have used it as an opportunity to make windfall gains and enrich themselves even more spectacularly.
In the latest Atlantic Monthly, Chrystia Freeland writes of “The Rise of the New Global Elite”, a rapacious new class of capitalists who travel the world with their Blackberries and laptops, cashing in on their entitlement to massive riches. Despite her attempts to paint them as more cosmopolitan, hard-working and likely to be the product of dramatic social mobility than previous “plutocrats”, it is hard to imagine their coming off as more selfish, near-sighted, brutish and venal if a Marxist had written the article.

The publicly-funded $700 billion TARP bailout of the financial sector has driven the US government into deeper debt while its proceeds have been used to finance a surge in outlandish bonus payments on Wall Street. Yet one wealthy investor, a “passionate Democrat” said he was battling his local Democratic congressman to prevent progressive tax reform:

“Screw you,” he told the lawmaker. “Even if you change the legislation, the government won’t get a single penny more from me in taxes. I’ll put my money into my foundation and spend it on good causes. My money isn’t going to be wasted in your deficit sinkhole.”

Their complete separation from the lives and experiences of ordinary people could not be starker:

And not the slightest tinge of guilt seems to operate when they discuss the causes of the GFC:

When I asked one of Wall Street’s most successful investment-bank CEOs if he felt guilty for his firm’s role in creating the financial crisis, he told me with evident sincerity that he did not. The real culprit, he explained, was his feckless cousin, who owned three cars and a home he could not afford. One of America’s top hedge-fund managers made a near-identical case to me—though this time the offenders were his in-laws and their subprime mortgage.

Freeland is keen to warn of the potential of a populist uprising if these new plutocrats don’t start to behave better, even raising the spectre of “truly punitive taxation”! Indeed, her cry is for a new commitment to a national interest rather than purely self-interested globe-trotting wealth accumulation.

A kinder, gentler America? Not likely

It is here that the liberal critique becomes particularly problematic, because it looks to a kinder, gentler national settlement, yet one shaped by the same relations of class domination that lie behind the current disaster. The scale of the recession is producing a deeper crisis of American society, centred on class polarisation and inequality, one that the mainstream political parties — and Barack Obama — are unwilling and unable to resolve precisely because they have been complicit in creating the conditions for it. In short, the economic policies of both the Republican and Democratic parties for the last 30 years have been focused on the neoliberal restructuring of the US economy. As elsewhere, neoliberalisation has led to a dramatic increase in inequality, the fragmentation and alienation of social existence, a constant drive for “reform” in the interests of capital, and a constant demand for individual citizens to be compliant in that process. On the latter, Terry Eagleton has aptly written:

Capitalism needs a human being who has never existed, one who is prudently restrained in the office and wildly anarchic in the shopping mall.

Furthermore, alongside enabling these forces, the major parties have been in lockstep in pursuing an aggressive foreign policy designed to maintain US global hegemony despite relative economic decline (something neoliberalism has been unable to reverse). They have also backed a domestic policy of growing coercion of the losers of economic restructuring — as evidenced by an unprecedented use of the prison system as a key tool of social control — and scapegoated outsiders for social ills, with increasingly harsh policing of “illegal” immigrants. The current liberal hand-wringing over politicised violence reeks of hypocrisy when examined alongside the banal, thoroughly mainstream violence of the US state under both liberal and conservative stewardship.

Gabrielle Giffords, for example, was not the crazed Leninist of Palin’s fevered imagery but a moderate “blue dog” Democrat. On the economy she supported both the Bush and Obama bailouts of the financial sector, which paved the way for Wall Street’s renewed excesses. While she backed some mild social provision and opposed the controversial Arizona state laws criminalising migrants, she was also committed to tough action against “illegals”, praising the arrival of the National Guard to police Arizona’s border. She was a former Arizona board member of the rabidly pro-Israel Anti-Defamation League. She was a passionate advocate of gun rights.

With the mainstream parties so unable to deliver an alternative to the crisis, it is no wonder that a movement like the Tea Party can pull inchoate anger at the political system and Wall Street into right-wing populism. Yet the deeper basis for the anger is a growing class polarisation, not the Right versus Left shadowboxing that defines elite discourse on television.

The impasse for the US Left in these circumstances is that its slavish support for the Democrats has only strengthened the Republican and radical Right. As Ralph Nader pointed out to blogger Chris Hedges only last week:

“The left has nowhere to go,” Nader said. “Obama knows it. The corporate Democrats know it. There will be criticism by the left of Obama this year and then next year they will all close ranks and say ‘Do you want Mitt Romney? Do you want Sarah Palin? Do you want Newt Gingrich?’ It’s very predictable. There will be a year of criticism and then it will all be muted.

His message, paraphrased by Hedges, was scarily prophetic: “If we do not engage in open acts of defiance, we will empower a radical right-wing opposition that will replicate the violence and paranoia of the state.”

The position of surrendering to the *cough* leading role of the Democrats derives from a deep pessimism regarding the potential for progressive subaltern movements. Yet both Obama’s millions-strong campaign and the recent 200,000-strong Washington protest against the Arizona anti-migrant laws (much bigger than any Tea Party mobilisation to date) speak to how the crisis can also produce alternative responses. And the growing attacks on public jobs and services depended on by America’s workers — soon to be intensified via plans by Obama’s bipartisan Deficit Commission to cut nearly $4 trillion from the federal budget — will undoubtedly provoke a class and social reaction on a wider scale than has been the case so far.

It is that kind of response, and the Left’s ability to build on it rather than once again channel it into a Democratic Party that has been the graveyard of social movements, which holds hope not only for stopping the radical Right but starting to expunge the sickness at the heart of American society.