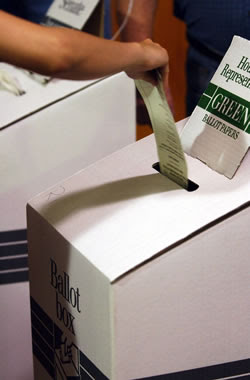 It puzzles me that one can say many outrageously left-wing things on Twitter and barely get a rise but when one raises criticisms of compulsory voting (CV) many left-leaning tweeps get very worked up indeed. Sometimes more worked up than they get about things like the possibility of the Liberals winning in NSW in a “we have the biggest mandate ever” landslide — one that could well be amplified by CV if today’s Galaxy Poll showing lack of enthusiasm for O’Farrell’s party is anything to go by.

So I’ve been encouraged to jot down why I am against compulsory voting. I should preface this by saying that I am not for the Left starting a campaign on the issue. I think it’s a second- or third-order question, but one worth unpicking because of the passions it arouses and the questions it reveals.

Neither am I for “disenfranchising” voters. I’m appalled at the way people are excluded from the rolls by active or passive means. Personally I’d like to see the franchise extended to 16-year-olds, permanent residents and all prison inmates, among other groups. Those are things worth campaigning for. Importantly, in Australia enrolment itself is compulsory but not automatic, placing the onus on voters themselves rather than the state. In the Howard years the AEC was given additional flexibility to simply scrub voters off the rolls when they moved without notifying it, a process recently corrected by the ALP.

Finally, I don’t see elections and their results as unimportant. I would argue that the biggest possible left-of-centre vote (the Greens and the ALP) is far preferable to an open party of big business like the Liberals gaining confidence through a landslide win in NSW. The results of elections matter greatly in terms of wider politics, and I will be campaigning for the Greens on 26 March — urging also that people should put Labor second to minimise Liberal gains (something I hope the Greens have the guts to do also).

One progressive argument for CV is that “if you have the right to vote you should be forced to exercise it”. This is an odd one, because there are many other political rights that have been won to which this logic is never applied — for example the right to join a union or run for local council. Part of this argument is an implication (sometimes stated) that “if you don’t use it you’ll lose it”. Yet many countries with voluntary voting don’t automatically collapse into dictatorship — largely because the factors that lead to dictatorship have little to do with the voting system. Democratic rights are normally lost because elites actively work to overthrow them.

I think what lies behind the argument is a frustration that a very good thing (the vote) has been won and yet many ordinary people look at the political system with disdain. Within this is the hope that people will be “forced to think about politics”* at least every three years. Perhaps, many argue, the rot in official party politics could be reversed if people just got more engaged, and surely CV is a great way to force engagement. Yet we have CV and the Australian major parties are about as hollow and unrepresentative as you could imagine. Certainly not qualitatively different to those in countries where voting is voluntary.

I think the real issue is around what “thinking about politics” or “being political” means. For many on the Left this is seen as somehow influencing the make-up of the existing state (and the parties which nominally run it) to do a better job for the people. In a capitalist democracy everything political understandably becomes refracted through the existing institutions. But a bigger idea also flows from this reality, the idea that the state stands above society, managing its affairs from a neutral position.

Marx argued in “On The Jewish Question” that this guise of the state is not the result of genuine neutrality but the way in which the economic and political realms appear to be separate under capitalism. This produces an apparent separation and opposition between state and civil society, hiding the way they are closely intertwined. It also obscures the way in which the ruling economic force (the capitalist class) is also the ruling political force in the land (through a distinctly capitalist state).

The Marxist legal theorist Evgeny Pashukanis put the development of the state as an apparently independent entity in a society ruled by capital this way:

Class domination, both in its organized and unorganized form, is much broader than the area which can be designated as the official authority of state power. The domination of the bourgeoisie is expressed in the dependence of the government upon the banks and capitalist groupings, in the dependence of each individual worker upon his employer, and in the fact that the staff of the state apparatus is personally connected with the ruling class. All these facts, and the number of them may be multiplied without limit, do not have any official legal expression. But in a mysterious manner they correspond in their significance with the facts which find their official legal expression, and represent themselves as the subordination of the same workers to the laws of the bourgeois state, to the orders and decrees of its agencies, to the verdicts of its courts etc. Along with the direct and indirect class denomination, there grows an indirect reflected denomination in the form of official state authority as a special force separated from society.

This is not just an abstract theoretical point but one that weighs on the choices voters face at the polling booth. The appeal of official politics and mainstream parties rests on the assumption that the state can be won to radically different social projects, perhaps even ones that fundamentally challenge capitalism. Once one rejects that assumption — and the history of Left parties seeking to transform society through purely electoral means suggests we should at least seriously question it — then the issue of voting appears in a very different context.

The existing franchise is limited much more by its minimal influence on the workings of the state (let alone class relations and the market) than any lack of participation by voters in what is — if we’re honest about it — an extremely limited choice for one pro-capitalist party or another carried out every few years. When there is a demand from the Left for the state to compel participation in a process that many ordinary people understandably see as disconnected from their lives and opposed to their interests, it implies that the problem is with ordinary voters rather than the institutional structures they feel alienated from. In this sense it is an elitist response to a deeper crisis of political representation, a crisis caused (fundamentally) by the state’s class nature.

Despite claims that CV strengthens working class participation in politics, it actually helps impose an extremely narrow and atomised form of politics on them. Few on the Left would demand that people be compelled by the state to go to protests, take strike action or riot, yet all those are situations where the political self-activity of the participants is much more meaningful than bourgeois elections.

That is why we shouldn’t be surprised that compulsory voting in Australia was not a demand won by a mass movement demanding rights but the initiative of conservative politicians worried that their ability to mobilise voters was being outstripped by a growing and confident labour movement. As an AEC paper on this says, “[I]n 1915, compulsory voting was introduced in Queensland by the Liberal Government of Digby Denham, apparently concerned that ALP shop stewards were more effective in ‘getting out the vote’, and that compulsory voting would restore a level playing ground.” The conservatives found it onerous to pay to employ workers to get the middle class vote out when the unions were able to mobilise workers for Labor much more efficiently.

However, the four federal elections prior to 1922 had an average turnout of 74 percent and it was not until that year’s poll saw turnout drop to 59 percent (in a period of heightened class struggle and disillusionment with official politics) that the issue became prominent again. It was a Nationalist Senator’s private members bill that was rushed through parliament with no opposition or public debate:

The deed was quickly done, and the Commonwealth Electoral Act 1924 slipped into the statute books “like a thief in the night”, causing a later historian to comment that this has been seen as “a victory for machine-managers across the party system, happy to avoid any possible odium in the matter”.

It was in this sense that ALP politicians came to embrace CV as they benefited from decreased reliance on the unions to get the vote out, no doubt partly because those unions might expect concessions in return for their efforts. The result was a further subordination of independent working class politics to the state, a trend that has now worsened with the growing reliance on state funding of elections, obscuring the atrophy of the ALP’s traditional social base. Indeed, CV serves to camouflage the growing alienation of voters from the political system — although last year’s dismal federal election was marked by a low turnout, high informal vote and significant non-enrolment.

I am not arguing here that an end to CV would be a solution to the crisis of political representation. I suspect my friend Ben Raue is right to say it would make little difference to election results or political parties. But the Left’s attachment to CV reveals an important lacuna in thinking about the state, one where not only is there no alternative to existing structures of elite domination, but where the state must compel voters to participate in those structures to remind them they should be thankful for the privilege.

Importantly, however, I don’t think this lacuna is mainly the result of bad intentions or political stupidity. Rather, it reflects how assiduously the Australian ruling class has manoeuvred to incorporate and institutionalise limited forms of democracy and dissent within state structures, thereby neutering more radical forms of politics. Unless the Left gets clear about that it will keep engaging with official politics almost entirely on the terms set by our rulers.

* Exact words I have heard from many left-wing friends.