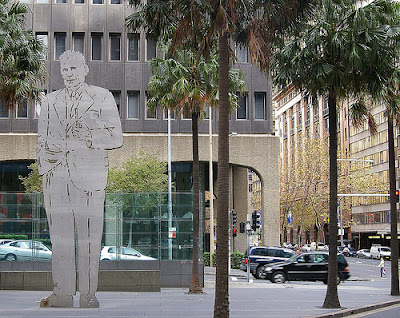 Here’s me being quoted in today’s Fairfax papers by ALP member Sarah Burnside, in a solid defence of the need for the Left to combine economic redistribution with progressive social policies:

Similarly, former NSW treasurer Michael Costa argues that “most traditional Labor voters are not supporters of the Greens’ policies”. Costa’s solution to ALP woes is reform — rather narrowly defined as privatisation and deregulation. There is little in Costa’s diagnosis with which the Liberal Party might disagree; political blogger Tad Tietze asks: “if market liberalism is at the heart of the ALP project, what separates it from that of the Coalition?”.

The ALP has changed dramatically in the past 40 years; the rise of hackery, spin and policy-by-focus-group are to be condemned. However, those who attack the party’s “progressive values” arguably miss its true betrayal: a tendency (notwithstanding Kevin Rudd’s Monthly essays) to capitulate to the dictates of neo-liberalism. Rather than taking aim at social reforms, critical friends of the party could re-examine its gradual turn away from a commitment to “civilising capitalism”.

Such analysis is rare. In a critique of George Megalogenis’ reflective essay Trivial Pursuit, Tietze suggests that the author takes for granted that the upheavals of the 1980s and 1990s, including the “upward distribution of wealth and increased power for capital over labour”, were of equal benefit to all, rather than examining the inequitable impacts of economic change on Australian society.

She concludes by arguing:

Labor need not be bound by a romanticised past nor by the purportedly inevitable neo-liberal future. In combining its traditional focus on those excluded from capitalism’s bright promise with a commitment to broader social justice, it can do much better than this.

Burnside is right that the ALP could potentially rebuild its base along the lines she envisages, but misses the structural constraints under which neoliberalism has become ascendant. Would the Australian ruling class really allow an ALP government to implement such a program?

Those constraints are the solution to the riddle of why the ALP would so willingly undermine its working class support base through neoliberal policies that shift more wealth and power upwards. They also underpin the attraction of reactionary social agendas as a form of displacement of social insecurity and mechanism for cohering allegiance to national capital while Labor (or other parties) pursue an economic agenda experienced negatively by the mass of the population.