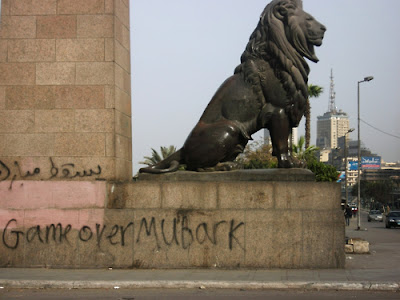 Great to wake up this morning to see that the Egyptian army is publicly stating it won’t use force against the protesters. Of course this could just be part of buying time for the regime, but it goes to the scale of the crisis facing Mubarak and his allies:

The presence of the army in the streets is for your sake and to ensure your safety and wellbeing. The armed forces will not resort to use of force against our great people,” the army statement said.

Your armed forces, who are aware of the legitimacy of your demands and are keen to assume their responsibility in protecting the nation and the citizens, affirms that freedom of expression through peaceful means is guaranteed to everybody.

The growing involvement of the working class in this story is ramping up the pressure on Mubarak, with capital wanting an end to the strikes and stayaways that are crippling its operations:

It is Mubarak, say an increasing number of the country’s business community, not the people who is costing them money.

Among those who appear to be distancing themselves from Mubarak is Naguib Sawiris, head of the Orascom international telecoms empire and one of Egypt’s most high-profile business figures, who said that he supported the ambitions of the protest movement, adding that a transition to democracy would be good for the Egyptian economy.

Foreign investors, on whom the economy depends, are also quick to retreat and, according to assessment by Credit Suisse, are not likely to return, at least until the crisis ends, which it believes is now most likely to happen with the departure of Mubarak. Instead, it warns, foreign and private investment risks collapsing even if Mubarak manages to cling on to power.

Mubarak, meanwhile, has been raising the spectre of “infiltration” of the protests by “people who use the name of religion”. At one level this is a message to the West about the threat of Islamists, chiefly his key political opponents in the semi-legal Muslim Brotherhood. But as Middle East analyst Juan Cole points out, it’s mainly directed at sowing divisions in a movement that has united ordinary people across religious groupings (not to mention secular organisations):

He implicitly blamed the Muslim Brotherhood for the sabotage and arson that has been committed against government institutions, including police stations. He contrasted the hooliganism of the Brotherhood with the peaceful aspirations of most Egyptians, and pledged to work for economic and social reform (while giving the pledge no content). Mubarak is attempting to split the movement against him by sowing seeds of doubt among its constituents. These include Coptic Christians, educated middle and upper middle class Muslims, and non-ideological youth, as well as the Muslim Brotherhood. By suggesting that the MB is taking advantage of the protests to conduct a campaign of sabotage behind the scenes, with the goal of establishing a theocratic dictatorship, Mubarak hopes to terrify the other groups into breaking with the Muslim fundamentalists. Since middle class movements such as Kefaya (Enough!) are small and not very well organized, Mubarak may believe that he can easily later crush them if he can detach them from the more formidable Brotherhood.

It is a desperate ploy and unlikely to work. Mainstream Muslim Egyptians and Copts do have some fear of the Muslim Brotherhood as a sectarian and fundamentalist tendency, but their dislike of the Mubarak government for the moment seems to overcome their anxieties about a theocracy.

The Guardian’s Jack Shenker provides a more nuanced look at the Muslim Brotherhood’s role to date. This quote from one rank-and-file member on the ground sums up what lots of reports are indicating:

Like many others, I participated in these protests not as a Brotherhood member but as an Egyptian, even though both labels apply to me,” said Mohamed al-Assas, a 35-year-old media production worker in Cairo. “Many of the older political leaders, not just of the Brotherhood, but of other formal parties as well, were not so enthusiastic about the demonstrations. But that doesn’t matter because this is a youth revolution — we don’t need leaders to tell us what to do.

Cole has also written on the growing class polarisation that lies behind the revolution, not just the IMF-loving Egyptian neoliberal elite’s enrichment of itself while most ordinary people live in poverty and insecurity, but also the sharp decline in living standards caused by the GFC and its global fallout:

The failure of the regime to connect with the rapidly growing new urban working and middle classes, and its inability to provide jobs to the masses of college graduates it was creating, set the stage for last week’s events. Educated, white collar people need a rule of law as the framework for their economic activities, and Mubarak’s arbitrary rule is seen as a drag here. While the economy has been growing 5 and 6 percent in the past decade, what government impetus there was to this development remained relatively hidden– unlike its role in the land reform of the 1950s and 1960s. Moreover, the income gained from increased trade largely went to a small class of investors. For instance, from 1991 the government sold 150 of 314 state factories it put on the block, but the benefit of the sales went to a narrow sliver of people.

The world economy’s [pdf] setback in 2008-2009 had a direct and horrible effect on Egyptians living on the edge. Many of the poor got hungrier. Then the downturn in petroleum prices and revenues caused many Egyptian guest workers to [pdf] lose their economic cushion. They either could no longer send their accustomed remittances, or they had to come back in humiliation.

The Nasserist state, for all its flaws, gained legitimacy because it was seen as a state for the mass of Egyptians, whether abroad or domestically. The present regime is widely seen in Egypt as a state for the others– for the US, Israel, France and the UK — and as a state for the few — the Neoliberal nouveau riche. Islam plays no role in this analysis because it is not an independent variable. Muslim movements have served to protest the withdrawal of the state from its responsibilities, and to provide services. But they are a symptom, not the cause. All this is why Mubarak’s appointment of military men as vice president and prime minister cannot in and of itself tamp down the crisis. They, as men of the System, do not have more legitimacy than does the president — and perhaps less.

Meanwhile, the ever-reliable Pepe Escobar gives his analysis of the confluence of factors that have led to the revolutionary situation, warning against those who want to try to renovate the existing, corrupt institutions of the Mubarak era as a basis for reform:

The Age of Rage in the arc from Northern Africa to the Middle East may be on — but still no one knows what the next geopolitical configuration will be. Will people have a say — or will it all be corralled and controlled by the powers that be?

Egypt won’t become a working democracy because of lack of political infrastructure. But it has to restart from scratch, with most of the opposition almost as reviled as the regime. The younger generation — empowered by the feeling of being on the right side of history — will be crucial.

They won’t accept an optical illusion of regime change that ensures continuous “stability”. They won’t accept being hijacked by the US and Europe and presented with a new puppet. What they want is the shock of the new; a truly sovereign government, no more neo-liberalism, and a new Middle East political order. Expect the counter-revolution to be fierce. And extending way beyond a few bunkers in Cairo.

Islamism and the secular Left

The question of “what to do” about the Muslim Brotherhood comes up for the Left in Egypt. Iran is an important example of how the radical Left got it wrong when dealing with Islamism in the midst of a revolutionary situation. I posted this in the comments at Larvatus Prodeo earlier today:

The secular Left in Iran, especially around the Communist Party which had deep roots inside the very radical workers’ movement at the time, didn’t see the overthrow of Iranian capitalism as being on the agenda and instead sought to accommodate more conservative forces in the interests of a post-Shah “national unity” in 1979. They literally had a theory that Iran had to go through a stage of capitalist development after becoming independent of the United States, before anything more radical was on the agenda. They even sowed illusions that the Islamists could be part of such a “progressive” alliance.

This gave Khomeini and the mullahs — an influential anti-Shah force but not a hegemonic one — more ground on which to argue that workers’ councils (Shorahs) and workers’ self-management of businesses — should be wound down. The Islamists argued that the Left was against national unity, and argument which they had no consistent response to.

Over a period of time the mullahs were able to witch-hunt the Left for undermining the revolution, with the repression being completed on grounds of national interest once the war with Iraq began.

There are certainly prominent socialists in Egypt today who have taken on board those lessons. Dealing with the MB is neither a matter of sectarian denunciation nor whitewashing their political limitations.

On the question of Islamism as political force, this 1994 article by the late Chris Harman is probably the best thing ever written on the rise of modern Islamism from a Marxist perspective. This is essential background reading.

When we do find ourselves on the same side as the Islamists, part of our job is to argue strongly with them, to challenge them — and not just on their organisations’ attitude to women and minorities, but also on the fundamental question of whether what is needed is charity from the rich or an overthrow of existing class relations.

The left has made two mistakes in relation to the Islamists in the past. The first has been to write them off as fascists, with whom we have nothing in common. The second has been to see them as “progressives” who must not be criticised. These mistakes have jointly played a part in helping the Islamists to grow at the expense of the left in much of the Middle East. The need is for a different approach that sees Islamism as the product of a deep social crisis which it can do nothing to resolve, and which fights to win some of the young people who support it to a very different, independent, revolutionary socialist perspective.

Finally, for live updates by Judith Orr, editor of British newspaper Socialist Worker, including good interviews with protesters on the ground in Cairo, check here.