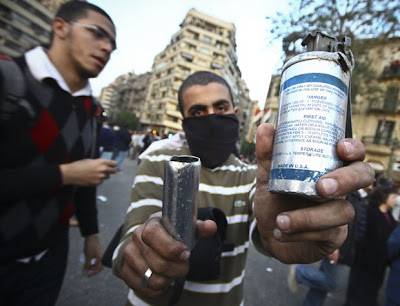 In February 2003 I was part of the 400,000-strong rally in Sydney opposing the impending US-British-Australian invasion of Iraq. It seemed for a moment that we were going to disrupt the plans of the self-styled Coalition Of The Willing by sheer force of numbers, part of probably the largest coordinated protest in Australian and world history — one that led the New York Times to famously declare the people on the streets as a “second superpower”.

I’d say that the feeling of our potential power then — a feeling gutted by the subsequent invasion — was only a fraction of what the Egyptian masses have felt over the last week. Not only have more than a million people turned out in Cairo, there have been hundreds of thousands more in cities around the country. And their goal is not the prevention of a faraway military action but the destruction of a tyrant who has brutalised, oppressed and belittled them for 30 years.

As I tweeted on Monday:

Can I just say the #Egyptian revolution is the most inspiring thing I have seen in over two decades of political activism? #Jan25

Yet, oddly for some, the festive and determined feeling of demonstrators on the streets of Cairo as they fight for democratic rights has not met with approval from many of the most ardent defenders of liberal democracy in the West.

One could have predicted that the Israeli government, so fond of touting itself as having by far the healthiest democracy (if not “the only true democracy”) in the Middle East, to be uncomfortable with democratic change in Egypt. But Netanyahu’s pro-Mubarak line has upset even many pro-Israel commentators because of its blatant assertion that the right of the Zionist state to pliant neighbours is more important than the Egyptian people’s human rights.

Then there are the elite liberals whose names include Obama, Clinton, Blair and our own two-time foreign minister, Kevin Rudd. These are the foreign policy players who have long championed “free and fair elections” and criticised (certain) Arab dictators. Yet the events in Egypt have seen them scramble for the cover of promoting “regional stability” and “orderly transitions”.

It’s not like they don’t have form. For example, in 2009 Clinton was playing up her good relations with the Egyptian dictator, “I really consider President and Mrs. Mubarak to be friends of my family. So I hope to see him often here in Egypt and in the United States.” As recently as Sunday she was still squirming about, refusing to back the Egyptian protesters against Mubarak, instead giving her support to some abstract “Egyptian People” despite claiming 30 years of support for “a democratic Egypt that provides both political and economic rights to its people.” Vice-President Joe Biden managed to be even more hamfisted, reluctant to admit that Mubarak was a dictator, saying he shouldn’t step down and even suggesting the protesters’ claims may not be “legitimate”.

Newsreader: Mr Rudd, if I can turn now to what is happening there and what you see as the future, do you think the people want more freedoms in their country? What’s Australia’s view on that? Do we support that?

Rudd: Well, the political situation is highly fluid, as a number of my colleagues from elsewhere around the world have said. We have long supported democratic transformation across the Middle East. We have equally strongly argued that this transformation should occur peacefully and without violence. That remains our view in terms of recent developments in Egypt as well.

Newsreader: The White House is suggesting that the Egyptians turn the internet back on and the social networks, that sort of thing, and of course to end the violence. You’d be supportive of that, would you?

Rudd: Well, I’ve not seen White House statements to that effect. I go back to what I said before. We ourselves have long supported democratic transformation across the Middle East and across the Arab world, but equally we strongly emphasise the importance for those things to occur peacefully and without violence. Therefore we should be exceptionally vigilant about what is occurring in Egypt at the moment.

A large part of this stems from the seismic shifts in geopolitics threatened by a successful Egyptian revolution. The United States and its allies are desperately looking to prop up as much of Mubarak’s regime as possible so that their interests in the Middle East are as little disrupted as possible. The arch liberal imperialist Tony Blair has probably been the most honest regarding the wishes of elite Western interests, dreaming up sickening paeans to Mubarak as he goes, even suggesting the tyrant has “been immensely courageous and a force for good” before raising the spectre of an Islamist takeover if the political transition is allowed to happen too quickly. That transition issue has seen Obama work desperately to buy time, if only to ensure that pro-US figures are in place to take key positions in any post-Mubarak settlement. As Alex Callinicos has pointed out in his analysis of the dilemma facing the United States:

The New York Times reported after a meeting of the US National Security Council last week: “President Obama’s decision to stop short, at least for now, of calling for Hosni Mubarak’s resignation was driven by the administration’s concern that it could lose all leverage over the Egyptian president, and because it feared creating a power vacuum inside the country, according to administration officials involved in the debate.”

Overshadowing these deliberations will be the memory of the Iranian Revolution of 1978-9.

Then the US hung on to its ally, the Shah, for too long. When it dropped him the army collapsed in the face of the revolutionary movement. In Egypt too, the US will be relying on its close links with the military to influence the situation. But the Egyptian armed forces aren’t a homogeneous institution. They are vulnerable to external pressure.

But such concerns are not just the preserve of the elite circles that hold the reins of power. Even the Greens’ Bob Brown found himself unable to openly support the protesters in an muted press release on Sunday, a position that was probably to the Right of the US State Department’s fast-changing line at the time. Similarly, Adam Bandt’s statement to a solidarity rally in Melbourne was written in an oddly passive style, avoiding explicit support for Egyptian protesters’ demands for Mubarak’s immediate resignation.

This reflects a wider argument within the mainstream Left that the instability and uncertainty of the revolutionary process, not to mention its (relatively minor) violent characteristics somehow make it hard to support. Suddenly for many on the Left it has become harder to support a people’s movement against dictatorship and for democracy because it doesn’t fit neatly into preconceived criteria. Better to pass brief comment on how worrying the influence of the Muslim Brotherhood is, or to agonise that the result will be a replay of Iran in 1979, or even just get down to debating Gillard’s flood levy against that heartless Abbott.

Slavoj Zizek, back in form after his recent spate of dog-whistling around multiculturalism, nails the issues around Islamism well, asking “Why fear the Arab revolutionary spirit?” He stands wholeheartedly on the side of the revolution, accurately diagnoses its ability to sideline more conservative Islamist forces inside Egypt, points out that liberal democracy itself cannot deliver liberal democracy, attacks the Left liberal pining for a stable bourgeois state, and talks of the failure of the old secular Left in the Middle East.

His article gets to the heart of liberal democratic anxiety around Islamism. In reality, the introduction of a liberal democratic regime in Egypt would — while providing some welcome increase in political rights — do little to solve the country’s deep social and economic polarisation. In the longer term its inability to resolve those problems would provide a space for the Islamists to pose as a social alternative, and they indeed have a long record of doing so through their focus on social justice and networks of elite-sponsored charity (however partial such a solution would be).

The only thing that can save the ideals of liberal democracy (liberty, equality, fraternity) in this kind of situation is the struggle for a new social system, not a continuation of neoliberal (or even some mythical social democratic) capitalism. This is the great contradiction of capitalism, a social system that allows the formal political rights bequeathed to us by the Enlightenment while systematically denying economic justice because of its inbuilt class hierarchies and anarchic market relations. And it is why liberal democracy ends up repeatedly on the wrong side of revolutionary situations, with its utopian hope that capitalist social relations can somehow be smoothed away within a very limited range of political rights. In essence, it has to disavow the very freedoms it espouses in “normal times”.

While it is impossible to predict what will eventuate from the process underway in Egypt, one thing that we need to be clear on is that this is not a rerun of the Iranian Revolution. The balance of social and political forces is markedly different, as Juan Cole shows in his latest blog post.

But that doesn’t mean we can be sanguine about what happens next. The great danger is that the Western Left gets cold feet about the revolution and starts to ape our rulers in looking for safe, reasonable liberal democratic forces to support. Zizek cheekily suggests that only the radical Left can save bourgeois democratic ideals, and so the liberals will have to fall in behind the revolutionaries. There simply is too little social basis for a stable liberal outcome to the crisis currently spreading across the Middle East. We have to be open to the possibility that the only “stable” and just solution will be one based on fundamental social transformation that rids us of not just of this or that dictator, but breaks the ensemble of social relations that reproduces the rule of capital itself. That is, a new hegemony of the subaltern groupings to replace the very capitalist state the liberals hold dear.