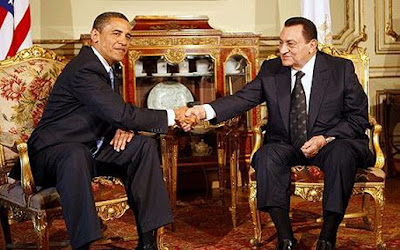 The tyrant’s strategy seems clear. After 30 years of brutality, repression and feathering the nest of his globetrotting fellow elites, at the moment his regime is in peril he will act as the reasonable one. He will act to reverse the “chaos” and “anarchy” in the streets as gangs of violent thugs attack and murder anti-government protesters.

In an interview with American ABC’s Christiane Amanpour:

He said he’s fed up with being president and would like to leave office now, but cannot, he says, for fear that the country would sink into chaos.

I asked President Mubarak about the violence that his supporters launched against the anti-government protestors in Liberation Square.

He told me, “I was very unhappy about yesterday. I do not want to see Egyptians fighting each other.”

Most ominously he pointed the finger at who he said had caused the violence:

He told me that he is troubled by the violence we have seen in Tahrir Square over the last few days but that his government is not responsible for it. Instead, he blamed the Muslim Brotherhood, a banned political party here in Egypt.

It’s the kind of statement that plays not only to an audience of Western liberals (Mubarak has some words specifically criticising Obama for not understanding “Egyptian culture and what would happen if I step down now”) but one designed to whip up fears in his domestic audience, some of whom are hoping for a speedy resolution to the crisis and the introduction of limited political reforms as a less risky option — and who see the spectre of the Muslim Brotherhood as a worse threat than all others.

The snubbing of the United States and growing attacks on Western journalists and human rights workers are also partly an attempt to connect with nationalist sentiment, thereby giving the impression that a regime intimately reliant on US financial and military assistance is actually independent. A more blatant falsehood it is hard to imagine, but it does point to the fact that the main enemy for ordinary Egyptians is squarely at home.

To lay the blame for violence on the anti-government protests and the Muslim Brotherhood is to ignore not only the widely-reported centrality of members of his key support bases in the police and ruling National Democratic Party (as well as sections of the street poor paid to participate), it also ignores the strategy of counter-revolutionary violence that has been organised since the first days of the protest movement.

Juan Cole has detailed how the regime has tried a series of strategies to organise the counter-revolution, each of them disrupted by protesters but each of them designed also to fray, demoralise and split the democracy movement. A central part of Mubarak’s game has been to keep the army united, one expects in order to use it to eventually crush the democracy movement so brutally that activists dare not even dream of raising their demands for another three decades.

Sometimes with the Islamists, never with the state

But the question of the Muslim Brotherhood is really the key to the situation. Notable by its slow emergence as part of the unfolding revolution, it is a mass organisation with multiple generations of activists within its networks, many with quite different political strategies. Yet it has also played the role of the key political opposition to Mubarak for over two decades, sustaining itself in part through its implantation within religious institutions, in part through its reformist social welfare organisations (which form something of a state within a state, or at least an alternative centre of social life in Egypt) and its public forays into politics around a variety of powerful themes — Palestinian rights, United States imperialism and the repressive, corrupt nature of the current regime. It is not the only show in town, as recent events have demonstrated, but it is likely to be the organisation with the greatest ability to halt any attempt at a violent counter-revolution.

Put simply, it is almost certain that Mubarak’s regime cannot fall without the Muslim Brotherhood throwing its weight squarely behind the revolution. This is why Mubarak is so keen to demonise it and push it to the margins.

Yet there are clear signs it is gearing up for Friday, the day when millions of Egyptian attend pre-work prayers at the Mosques, as the New York Times has reported:

“We demand that this regime is overthrown, and we demand the formation of a national unity government for all the factions,” the Brotherhood said in a statement broadcast by Al Jazeera.

In an interview just before the current wave of protests began in Egypt, Essam el-Erian, a leading figure in the Brotherhood, said the group did not seek to monopolize power. “We want an atmosphere for fair competition now that can allow us to compete for power in the future,” Mr. Erian said. “And we want stability and freedom for people, not chaos.”

The key for the revolution is whether or not its current organising core can convince the Brotherhood to join in and open that possibility of “fair competition”. This is not a pipedream as sections of the secular Left, including key groups of socialists with important roots inside the working class, have developed important links with the organisation, drawing on the methodology of “Sometimes with the Islamists, never with the state”.

For those who may wish that socialists merely “mobilise the working class” to challenge the regime, this is simply not how the situation has developed or can develop. It is a schematic abstraction that sounds warm and fuzzy but misses the reality on the ground. Politically, if the largest national opposition force, a force with deep roots and coherent organisation under repressive conditions — which also holds the respect and sometimes allegiance of key sections of the working class — is not behind the protests then Mubarak may come out ahead. Forging what Gramsci called a “national-popular collective will” in opposition to the state cannot simply go around the Brotherhood, which explains why the regime is so worried about its involvement.

A tactical united front with the Islamists — in these conditions and at this time — is almost certainly a precondition for the victory of the revolutionary process. Fear of the Muslim Brotherhood right now should be Mubarak’s (and Obama’s) but not the Left’s.

UPDATE: Pleasure to be disdainfully quoted in The Australian.