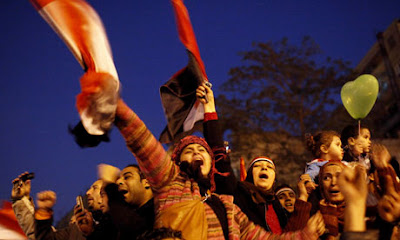 The most indubitable feature of a revolution is the direct interference of the masses in historical events.

How good was that?

Here we’ll let some Egyptian voices speak: First, a statement on Friday from the Revolutionary Socialists of Egypt:

What is happening today is the largest popular revolution in the history of our country and of the entire Arab world. The sacrifice of our martyrs has built our revolution and we have broken through all the barriers of fear. We will not back down until the criminal “leaders” and their criminal system is destroyed.

Mubarak’s departure is the first step, not the last step of the revolution

The handover of power to a dictatorship under Omar Suleiman, Ahmed Shafiq and other cronies of Mubarak is the continuation of the same system. Omar Suleiman is a friend of Israel and America, spends most of his time between Washington and Tel Aviv and is a servant who is faithful to their interests. Ahmed Shafiq is a close friend of Mubarak and his colleague in the tyranny, oppression and plunder imposed on the Egyptian people.

Over the past three decades this tyrannical regime corrupted the country’s largest estates to a small handful of business leaders and foreign companies. 100 families own more than 90 per cent of the country’s wealth. They monopolise the wealth of the Egyptian people through policies of privatisation, looting of power and the alliance with Capital. They have turned the majority of the Egyptian people to the poor, landless and unemployed.

We want the nationalisation of companies, land and property looted by this bunch. As long as our resources remain in their hands we will not be able to completely get rid of this system. Economic slavery is the other face of political tyranny. We will not be able to cope with unemployment and achieve a fair minimum wage for a decent living without restoring the wealth of the people from this gang.

This system does not stand alone. Mubarak, as a dictator, was a servant and client directly acting for the sake of the interests of [the United States] and Israel. Egypt acted as a colony of [the United States], participated directly in the siege of the Palestinian people, made the Suez Canal and Egyptian airspace freezones for warships and fighter jets that destroyed and killed the Iraqi people and sold gas to Israel, dirt cheap, while stifling the Egyptian people by soaring prices. Revolution must restore Egypt’s independence, dignity and leadership in the region.

This is not a revolution of the elite, political parties or religious groups. Egypt’s youth, students, workers and the poor are the owners of this revolution. In recent days a lot of elites, parties and so-called symbols have begun trying to ride the wave of revolution and hijack it from their rightful owners. The only symbols are the martyrs of our revolution and our young people who have been steadfast in the field. We will not allow them to take control of our revolution and claim that they represent us. We will choose to represent ourselves and represent the martyrs who were killed and their blood paid the price for the salvation of the system.

A people’s army is the army that protects the revolution

Everyone asks: “Is the army with the people or against them?” The army is not a single block. The interests of soldiers and junior officers are the same as the interests of the masses. But the senior officers are Mubarak’s men, chosen carefully to protect his regime of corruption, wealth and tyranny. It is an integral part of the system.

This army is no longer the people’s army. This army is not the one which defeated the Zionist enemy in October 1973. This army is closely associated with [the United States] and Israel. Its role is to protect Israel, not the people. Yes we want to win the soldiers for the revolution. But we must not be fooled by slogans that “the army is on our side”. The army will either suppress the demonstrations directly, or restructure the police to play this role.

What we need right now is to push for the socioeconomic demands as part of our demands, so that the person sitting in his home knows that we are fighting for their rights. We need to organise ourselves into popular committees which elects its higher councils democratically, and from below. These councils must form a higher council which includes delegates of all the tendencies. We must elect a higher council of people who represent us, and in whom we trust. We call for the formation of popular councils in Middan Tahrir, and in all the cities of Egypt.

Call to Egyptian workers to join the ranks of the revolution

The demonstrations and protests have played a key role in igniting and continuing our revolution. Now we need the workers. They can seal the fate of the regime. Not only by participating in the demonstrations, but by organising a general strike in all the vital industries and large corporations.

The regime can afford to wait out the sit-ins and demonstrations for days and weeks, but it cannot last beyond a few hours if workers use strikes as a weapon. Strike on the railways, on public transport, the airports and large industrial companies! Egyptian workers! On behalf of the rebellious youth, and on behalf of the blood of our martyrs, join the ranks of the revolution, use your power and victory will be ours!

Glory to the martyrs!

Down with the system!

All power to the people!

Victory to the revolution!

Send messages of support to info@e-socialists.net

And here is the analysis of Egyptian blogger and journalist Hossam el-Hamalawy from his blog on Saturday:

Since yesterday, and actually earlier, middle class activists have been urging Egyptians to suspend the protests and return to work, in the name of patriotism, singing some of the most ridiculous lullabies about “let’s build new Egypt,” “Let’s work harder than even before,” etc… In case you didn’t know, actually Egyptians are among the hardest working people in the globe already.

Those activists want us to trust Mubarak’s generals with the transition to democracy — the same junta that has provided the backbone of his dictatorship over the past 30 years. And while I believe the Supreme Council of the Armed Forces, who receive $1.3 billion annually from the US, will eventually engineer the transition to a “civilian” government, I have no doubt it will be a government that will guarantee the continuation of a system that will never touch the army’s privileges, keep the armed forces as the institution that will have the final say in politics (like for example Turkey), guarantee Egypt will continue to follow the US foreign policy whether it’s the undesired peace with Apartheid State of Israel, safe passage for the US navy in the Suez Canal, the continuation of the Gaza siege and exports of natural gas to Israel at subsidized rates. The “civilian” government is not about cabinet members who do not wear military uniforms. A civilian government means a government that fully represents the Egyptian people’s demands and desires without any intervention from the brass. And I see this hard to be accomplished or allowed by the junta.

The military has been the ruling institution in this country since 1952. Its leaders are part of the establishment. And while the young officers and soldiers are our allies, we cannot for one second lend our trust and confidence to the generals. Moreover, those army leaders need to be investigated. I want to know more about their involvement in the business sector.

All classes in Egypt took part in the uprising. In Tahrir Square you found sons and daughters of the Egyptian elite, together with the workers, middle class citizens, and the urban poor. Mubarak has managed to alienate all social classes in society including wide section of the bourgeoisie. But remember that it’s only when the mass strikes started three days ago that’s when the regime started crumbling and the army had to force Mubarak to resign because the system was about to collapse.

Some have been surprised that the workers started striking. I really don’t know what to say. This is completely idiotic. The workers have been staging the longest and most sustained strike wave in Egypt’s history since 1946, triggered by the Mahalla strike in December 2006. It’s not the workers’ fault that you were not paying attention to their news. Every single day over the past three years there was a strike in some factory whether it’s in Cairo or the provinces. These strikes were not just economic, they were also political in nature.

From day 1 of our uprising, the working class has been taking part in the protests. Who do you think were the protesters in Mahalla, Suez and Kafr el-Dawwar for example? However, the workers were taking part as “demonstrators” and not necessarily as “workers”– meaning, they were not moving independently. The govt had brought the economy to halt, not the protesters by its curfew, shutting down of banks and business. It was a capitalist strike, aiming at terrorizing the Egyptian people. Only when the govt tried to bring the country back to “normal” on Sunday that workers returned to their factories, discussed the current situation, and started to organize en masse, moving as a block.

The strikes waged by the workers this week were both economic and political fused together. In some of the locations the workers did not list the regime’s fall among their demands, but they used the same slogans as those protesting in Tahrir and in many cases, at least those I managed to learn about and I’m sure there are others, the workers put forward a list of political demands in solidarity with the revolution.

These workers are not going home anytime soon. They started strikes because they couldn’t feed their families anymore. They have been emboldened by Mubarak’s overthrowal, and cannot go back to their children and tell them the army has promised to bring them food and their rights in I don’t know how many months. Many of the strikers have already started raising additional demands of establishing free trade unions away from the corrupt, state backed Egyptian Federation of Trade Unions.

Today, I’ve already started receiving news that thousands of Public Transport workers are staging protests in el-Gabal el-Ahmar. The temporary workers at Helwan Steel Mills are also protesting. The Railway technicians continue to bring trains to halt. Thousands of el-Hawamdiya Sugar Factory are protesting and oil workers will start a strike tomorrow over economic demands and also to impeach Minister Sameh Fahmy and halt gas exports to Israel. And more reports are coming from other industrial centres.

At this point, the Tahrir Square occupation is likely to be suspended. But we have to take Tahrir to the factories now. As the revolution proceeds an inevitable class polarization is to happen. We have to be vigilant. We shouldn’t stop here… We hold the keys to the liberation of the entire region, not just Egypt… Onwards with a permanent revolution that will empower the people of this country with direct democracy from below…