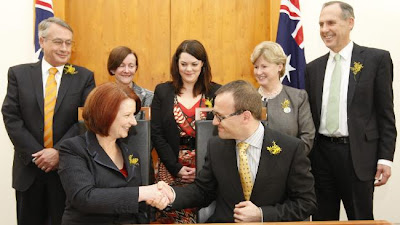 Since the dust from the August election settled, something strange has been going on in the Australian Greens camp. I think it’s probably a conscious “strategy,” but I’m not privy to the discussions in the party room, so I can’t be sure. But here is my stab at it, and why it worries me deeply.

Last week’s announcement on the flood levy is reflective of what is going on, so it’s worth quoting at length:

The Australian Greens will support the flood levy in the House of Representatives and the Senate after important gains from the Government on their proposed funding cuts, Greens Leader Bob Brown, Deputy Leader Christine Milne and MP Adam Bandt said in Canberra today.

“The Greens have taken our concerns directly to the government and have negotiated a good outcome that will release funding for flood recovery and protect key programs,” Senator Brown said.

The Greens have ensured that $100 million will be returned to the Solar Flagships program in the forward estimates and that a proper consultation process will be undertaken to develop long term policy for large-scale solar power. […]

The Australian Greens have also secured the restoration of the National Rental Affordability Scheme and commitments regarding funding for learning and teaching.

Their Senior Media Advisor, Marion Rae, managed to claim this as a victory on Twitter:

The levy in an ‘Age of Austerity’

It’s worth taking a step back and examining the meaning of the levy debate to see why this is such a problematic line of thinking. To do this I’ll look at the two measures being foregrounded by the government: the flood levy and the cuts to the budget.

The levy is set to raise a mere $1.8 billion, a tiny fraction of Australia’s annual GDP and only about a third of the $5.6 billion Gillard has estimated the floods will cost the federal government. According to one analyst, “It represents just 0.2 per cent of household disposable income or 0.3 per cent of total consumer spending,” and was driven by cries from financial markets (those great friends of working people) worried that reconstruction activities could “overheat” the economy and lead the RBA to raise interest rates. Their solution? Cut consumer spending. Much of the debate about whether such a one-off tax will “destroy the economy” or “drive people in to hardship” has thus been a smoke and mirrors exercise, with the Coalition playing a variation on its “great big new tax” trope.

But it is important to understand the politics (rather than economics) of why Gillard has focused on the levy. It has been to pose the entire debate in terms of how we pay for an apparently unexpected, “natural” disaster. This is Gillard’s own smoke and mirrors, using a set of moral arguments about helping flood victims to drive her much less openly declared austerity agenda, hatched long before the summer’s disasters and on which she and Abbott are in broad agreement.

Treasury’s Red Book message is crystal clear — that neoliberal reforms must remain central to the government’s actions. There are three main lines of argument in the document. First, that the Australian economy is doing so well that dangers of “wage inflation” need to be headed off at the pass. Second, that government deficit reduction must be prioritised. And third, that “market mechanisms” remain the best way to do… well, just about everything.

The second commitment is most important here, in line with Wayne Swan’s conversion from stimulus champion to sovereign debt crusader at last year’s G20 in Toronto. Faced with minority government and an inability to control the political agenda, Gillard has set out to prove herself a great (neoliberal) reformer.

But such reforms are not exactly popular with an electorate tired of decades of job insecurity, rising overtime (often unpaid), speed-ups at work, privatisations, running down of public services and the spectacle of bankers, financiers and corporate CEOs enriching themselves while everyone else is urged to show “restraint”. It’s especially hard to sell cuts when you’ve also spent the last few years telling people how successful you’ve been in (a) preventing recession and (b) minimising the budget deficit compared with just about every other rich nation.

Hence the obsession in having to reach a budget surplus by 2012-3 under any circumstances — it is a proxy for wanting to drive further cuts to public spending while still guaranteeing corporate tax cuts, maintaining the Howard-Rudd tax cuts for high income earners and delivering outlandish tax concessions — worth $25-30 billion and mainly going to the wealthy — for Australia’s scandalous superannuation system.

The levy debate is in reality a way of softening people up for austerity measures demanded by bosses and financial markets faced with increased competitive pressures driven by a world economy still mired in its worst downturn since the 1930s. And if governments like those of the UK — or US states like Wisconsin — get away with wholesale attacks on public sector jobs and services, accelerate privatisation and user-pays measures and break remaining bastions of union organisation, the cries from the business class to ramp up such efforts here will only grow more shrill.

Gillard’s linking of the levy with cutbacks is not just an attempt to mollify Abbott but a cynical move to pressure crossbenchers into agreeing to cuts as part of a “compassionate” response to flood victims. It’s a classic Trojan Horse strategy, beloved on American legislators and their “omnibus” bills.

The Greens and the political system

The Greens have effectively surrendered to this approach in the same week that Gillard’s watering down of the mining tax has been exposed as robbing the government of a staggering $60 billion in revenue over 10 years. The Greens’ press release sheepishly admits they would’ve preferred the original RSPT rather than agreeing to the cuts they have backed, but they backed cuts anyhow.

They could have added to this the outrageous level of state subsidy of the corporate sector that continues unabated under Gillard even as she talks of tightening the screws on public services and welfare, as Greg Barns has summarised:

There is, for example, the Australian Competitiveness and Investment Scheme, a Howard government baby. That has grown from $142.6 million in 2002 to $233.8 million this year, before reducing to a still sizable $137 million next year. Alongside this are three programs designed to commercialise business ideas. Together they are costing taxpayers $67 million in this year alone.

And business is also doing very nicely on tax concessions. The Industry R & D Tax Concession is worth $1.5 billion this year and next year will be even higher. It is a program which has grown like topsy since its introduction by the Howard government almost a decade ago. In fact it has risen every year from 2002 where it cost $370 million. The 2010-2011 Portfolio Budget Statement for the Industry portfolio also lists what it terms “other R&D support” at $94.4 million this year.

And of course then there are the specific industry programs. The textile, clothing and footwear industry has benefited from a package of funding worth over $400 million in the past two years. But the granddaddy of industry mendicants, the auto sector, leaves the TCF sector in the shade. It has squeezed a cool $3.4 billion out of the Rudd and Gillard governments to retool their plants.

Now, I’m not claiming that Greens MPs, or party members, are wedded to neoliberal austerity and corporate subsidies. The opposite is usually true. Adam Bandt has publicly attacked neoliberalism on more than one occasion. And I spoke on a Politics in the Pub panel with NSW Greens MP John Kaye a fortnight ago where he railed against neoliberal policies. However, the party is internally confused and divided on what a progressive economic policy looks like, with aspects of neoclassical orthodoxy sitting alongside Keynesian ideas and more radical notions.

There are two further weaknesses in the Greens’ strategy which leaves them looking like Gillard’s useful idiots on the question of which class interests the political system serves. First is their focus on parliamentary compromise as the sole arena of political struggle. They like to dress this up as winning “progressive outcomes”, but when the general thrust of government policy is regressive then “victories” are at best a softening of right-wing attacks rather than any forward movement. “A good outcome” means slowing the rate of neoliberalisation rather than mobilising a real fight against it. It is a strategy that cements the passivity of ordinary people while politicians play games that directly affect their livelihoods.

Second is their desire to appear cooperative with Gillard on those issues where they feel they cannot win ground from the ALP. So on refugees and climate issues they will often drive a hard bargain (so they rightly rejected the CPRS) but where they feel on shakier ground — with economics the key example — they tend to want to appear pliant and reasonable. Hence Sarah Hanson-Young’s performance on Insiders this morning, promising to keep being constructive as Gillard brings more cuts to the table in the months ahead! This will do nothing other than legitimise the austerity agenda Gillard is implementing.

After 2007, internal polling was interpreted by party strategists as showing that voters preferred the Greens to “help” Kevin Rudd fulfil progressive promises rather than attack him. Yet the Greens’ big vote in 2010 rested in part on an effective denunciation of Gillard dragging the ALP sharply to the Right. There is no sign that Gillard intends to arrest that trajectory, yet the Greens MPs have been cuddling up to her — including sitting on a secretive carbon price committee that has seen them outmanoeuvred on non-market climate measures — far more than guarantees of supply and confidence would require of them. Bob Brown’s public attack on Andrew Bolt last year was specifically in defence of Gillard.

In this, there is desperation to be seen as effective mainstream operators, acceptable to political and business elites, and shedding their image as a party of protest. The risk is that they will be tainted by the stench of the same “broken” political system (what I have suggested is a kind of not-politics) that Australian voters rejected so resoundingly last August. It is a system that many on the Left hoped the Greens would be part of transforming. Instead the Greens MPs risk being assimilated into it, thereby sending the message that resistance is futile.