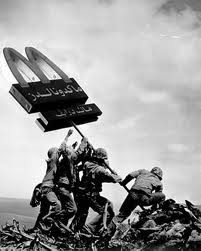 Many people have reservations about the UN Security Council authorising the use of “all necessary measures” in Libya. But in spite of this, many also think that something must be done and it would be much worse to do nothing. Leaving aside the more particular question of intervening in response to a call for support (which forms much of Guy Rundle’s position), I want to look at the concept of humanitarian intervention as a response to these crises.
There is a sense of desperation about the situation in Libya, spurred by genuine human empathy. But supporting military intervention in response to these crises reflects a lack of a sense of history and a lack of imagination. The leopard has not changed its spots.
The ‘international community’ — saviour or villain?

The key comparison, at least amongst international lawyers, is with the Rwandan genocide. In 1994, some 800,000 people were killed in a hundred days. If ever there was a moral justification for humanitarian intervention, Rwanda was it. But the “international community” — the United Nations and similar entities*  — did the opposite. The UN Security Council failed to authorise the use of force and, when the genocide commenced, did nothing to stop it.

The first conclusion to draw from this is that the international community is not compelled to intervene by morality.

But I also want to argue that it is a mischaracterisation to describe the Rwandan crisis as a situation where the international community’s failure to “do something” resulted in genocide. The failure to intervene is not the explanation for the genocide — it is simply more complicated than that.
As Anne Orford argues in Reading Humanitarian Intervention, the flow of international aid to Rwanda helped create and stabilise a powerful state structure, which later enabled the genocide to occur on such a large scale. The role of institutions like the World Bank and the IMF was central; even “right up until the last minute” before the genocide, Rwanda was seen by these agencies as a “model developing country”. Orford goes on to note that:
Aid agencies and the community of aid workers and foreign diplomats present in Rwanda during that period did little in response to the well-documented rise in government-sponsored human rights violations, racism, massacres and militarisation of society, all of which “were constitutive elements of the drive to genocide.”
There were plenty of steps that the international community could have taken to prevent the situation arising, including basic things like making aid dependent on an end to human rights violations. But this never happened.
In other words, it is simply wrong to see the failure of these states as something external or foreign from the way the international community operates more generally. This is capitalism shaping the world in its own image — the international community has a hand in creating these brutalities or, at the very least, the conditions in which they occur. It is therefore very problematic to think it can also be the solution.
The other obvious example, which has been well canvassed by others, is the experience of Iraq and Afghanistan. I will not reiterate the humanitarian disasters that have resulted there, but I note the idea that the West is a force for peace and freedom in the region has been brought into sharper focus by the uprisings in recent months. If Iraq and Afghanistan were not occupied by the US and its allies it is reasonable to suggest that the turmoil in Tunisia and Egypt might well have spread to them and they could have won regime change without a million dead.

Legal scholars tend to see these situations as a failure of the rule of law, rather than part of a system of international relations that is, by its nature, brutal and full of conflict. As China Mieville describes the argument in Between Equal Rights, “where there is a problem of disorder or violence, it is deemed a failure of law: the main problem about law is that there is not enough of it.” Of course, we all know that the legality of such steps is far from a primary consideration: consider Richard Perle’s brazen admission that the 2003 invasion of Iraq was illegal, indeed that international law had “stood in the way of doing the right thing.” One can only assume, therefore, that “more international law” would actually mean more authority to for military adventures like that in Iraq.

This kind of talk has always meant that international legal thinking has a troubled relationship with the concept of the state. As a law student, I was encouraged to see states as discreet sovereign entities, motivated by a number of factors including, at times, human rights. But these assumptions are clearly out of step with reality. As Mieville concludes: “a world structured around international law cannot be but one of imperialist violence. The chaotic and bloody world around us is the rule of law.” The crisis in Rwanda was something created by the system, not an exception to it. This is why a materialist conception of law, as opposed to an idealist or positivist understanding, is so helpful in these contexts. It encourages us to see the situation as a whole, rather than as discreet problems that require particular solutions.

What we should be doing
So what can be done to stop these kinds of crises in the future? Already there is criticism that the international community should have acted earlier; the no-fly zone in Libya may have come too late to be of any use. But when we start to consider how much earlier we should have acted, we should start reflecting on how long the West has, in fact, been intervening in these places.
As a start, we should oppose our government intervening in countries through aid budgets that are contingent on neo-liberal reforms and silent on human rights. Consider, for example, the historically cosy relationship that the Australian Government has had with Indonesia. The Australian Government spends $450 million each year in aid to Indonesia, our largest development assistance partnership. This is obviously something that the government likes to sell as something positive we do for our region. Yet there are very good reasons to be sceptical about our aid program with respect to both its quantity and quality.
This relationship was tested in East Timor in 1999. The Australian Government had supported the Indonesian occupation for decades and yet suddenly felt compelled to act when the killing started in the wake of East Timorese independence. The UN Security Council authorised a multinational force to restore peace and security in East Timor.  This was and continues to be controversial.
Once again, a major concern was that the intervention took place too late to be of significant benefit to those being slaughtered. A better way of understanding the situation is that we were too late in our criticisms of the actions of our own government in supporting the Indonesian military. Our relationship with Indonesia, stretching back to the 1950s, had been to explicitly ignore the occupation of East Timor and the massacres that took place during that time. It is impossible to understand the crises that erupted in 1999 without reflecting on our history of involvement in the region.
Needless to say, in the wake of that military intervention, the Australian Government took a very aggressive stance when renegotiating the bilateral treaty that covers the extraction of oil and gas in the Timor Gap. The result was that East Timor “lost a large swathe of important benefits under the Treaty’s provisions.” This is one of the many spoils of humanitarian intervention.
It is not hard to imagine another uprising occurring in any one of the many politically troubled regions of Indonesia today. It is difficult to see how we could not be in some way responsible for any military backlash that might take place given our involvement with the country and stated enthusiasm to “support improved economic management through support for key structural reform measures.”
And yet, our current relationship with Indonesia leaves no room for any serious criticism of human rights violations in West Papua. This is despite the fact that just last year, Indonesian soldiers brazenly posted footage on Youtube showing the torture of a West Papuan farmer. If we are going to seriously think about what we can do as an international community about human rights abuses, we should start putting pressure on our own government to take a stand on these kinds of issues.
I have only the space to touch on these complex arguments, which involve difficult concepts — particularly for lawyers. Such debate is not served well if we are unable or unwilling to reflect on the reasons for crises and how we plan to avoid them in the future. Desperation is the midwife of poor judgment and when we defer to the law on questions of morality, it becomes a coward’s charter. In expressing support for the no-fly zone on Friday, Professor Sarah Joseph, of the Castan Centre for Human Rights Law, concluded that:
I believe (and fervently hope) the consequences of international intervention in Libya will be less horrific at this time than the fairly predictable consequences of Gaddafi rolling over the rebels. But I cannot know, and nor, frankly, can anybody else.
I disagree with the implications in this statement. We have to do our best to learn from history and think about these situations in context, otherwise we become complicit in making things worse. We need to build an international solidarity movement that criticises the involvement of the West in developing countries, both militarily and under the auspices of development. There are no shortcuts.
* I think it is fair to describe the “international community” as constituted by a number of states acting through forums like the UN, the IMF, the World Bank and NATO. The international community is made up of sovereign states that are nominally equal, but substantively unequal and each has its own particular agenda.