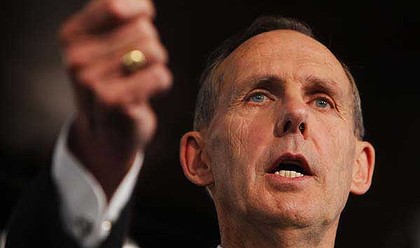 Since the NSW election discussion among many readers of Left Flank has been dominated by the battle over Marrickville Council’s BDS policy. The Left inside the party has just had to face down the combined forces of the Murdoch media, Barry O’Farrell, Kevin Rudd, various sections of the pro-Israel lobby, and the party’s own national leader, Bob Brown. This is not to mention the use of the mainstream media to attack pro-BDS Greens and state Greens policy by Upper House MP Cate Faehrmann and Marrickville Councillor (and until very recently Bob Brown staffer) Max Phillips.

The Marrickville Councillors who stood firm to support the BDS did so under enormous internal and external pressure, well documented in the major daily newspapers. What you can’t read is that many NSW Greens members continue to support a strong stance on Palestine, in favour of the BDS. Moreover, missing from much analysis is that the adoption of the BDS was democratically decided by the NSW Greens, and is a political position held by many progressive forces globally.

From what we’ve heard about the Greens NSW State Delegates Council held in Balmain over the weekend, tensions have run high in the wake of the election and BDS controversy. We understand that the party has not backed away from its support for the BDS, and the use of media outlets to wage internal arguments has not been allowed to slide. This is enormously important both in terms of the internal BDS campaign, and because it should give courage to Councillors (as well as candidates, NSW MLAs and MLCs, and Federal Senators) that they should continue to support and promote democratically-decided policy even when faced with the enormous criticism of the forces discussed above.

This is not simply a case of taking the principled stand of a martyr: the international BDS campaign is a live and real issue, and the plight of Palestinians in Israel and the occupied territories is critical. Some Greens have argued that the party should take a pragmatic position on questions like the BDS. This seems quite strange to us. For years the Greens held principled positions on climate change even when these were called mad, fringe and unreasonable. Why should the BDS be any different?

Isn’t there also a wider issue for the Greens itself at stake here: will the Greens continue in its tradition of being the progressive voice willing to take principled stands even in the face of criticism from mainstream politicians and the MSM?

The BDS has also been used as a stalking horse in relation to Senator-elect Lee Rhiannon, seeing her accused of factionalism. While some of our readers have encouraged Left Flank to write on these claims, even a cursory look at the MSM will show that any factional behaviour has been on display in public and is not at the hands of Rhiannon. Indeed, if there’s any criticism to be made of the Left inside the NSW party it’s that it has too often put party unity ahead of political clarity and coherence, leaving space for more conservative forces to go on the front foot.

NSW members were greeted at their State Delegates Council meeting this weekend by this story from Saturday’s Canberra Times. The story suggests anything but a cooling off after the state election and BDS upheaval. If anything, things are only just starting to heat up:

Greens leader Bob Brown is behind a push to completely nationalise his party and pull state divisions into line so that they more fully recognise the national leadership.
The Australian Greens are currently a confederation of parties, with all states branches aligning to the national constitution but also having their own constitutions and autonomy.
Senator Brown and a significant portion of the Greens’ membership across Australia want both the national and state constitutions changed to give more authority to head office.
The nationalisation issue has simmered inside the Greens for a decade but intensified following recent embarrassing episodes where the NSW and Victorian branches defied Senator Brown’s advice. He rebuked the NSW Greens for promoting a highly publicised campaign to boycott Israeli goods.
The campaign led to the Marrickville Council passing a motion in support of the boycott last month before being forced to back down.
Senator Brown was also annoyed at how the Victorian Greens handled the state election in November.
During a closed-door meeting in Canberra last month, staged by party think-tank the Green Institute, Senator Brown spoke in favour of moving from a federal structure to a completely national party.
One attendee said Senator Brown spoke “passionately and positively” about the need to make the transition and that he was warmly applauded by the hundred-strong audience.
“Bob said there were problems still arising in the state branches and that they needed more support around election times … no one spoke against it,” the source said.
The meeting, at the Australian National University on April 16, was a day-long gathering of party members to discuss where they wanted the Greens to be in five years’ time. The feeling was that the party had to appear to be more united and professional.
Other party sources say Senator Brown spoke diplomatically but was privately outraged at how the branches were embarrassing the Greens brand. “Bob has spent years positioning the party as a serious and moderate player, but NSW has always been a problem … It has always been the block to reform and change,” one source said.
Another party source said mismanagement of the Israel boycott issue had spooked some inside the Greens because it made the party look like a bunch of radicals who were happy to fight with each other.
Senator-elect Lee Rhiannon, who dominates the NSW Greens, had repeatedly spoken in favour of the boycott.
“Bob is genuinely concerned about Lee Rhiannon going into the Senate,” the source said.
“He doesn’t want to see everything he’s worked for collapse and he knows there is one or two of his federal team that could be vulnerable to be people like Lee.”
The reform to nationalise the Greens structure could take a year or more to succeed. The NSW and the West Australian branches are expected to be the most resistant…