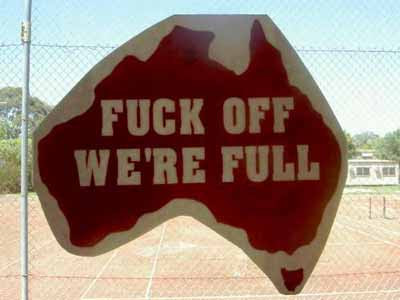 Have the Greens decided to join the chorus of anti-immigrant racism that has bedevilled Australian politics for over a century? It seems so, with Bob Brown using the term “queue jumpers” to describe skilled migrants entering the country. Criticising Julia Gillard’s “Malaysian Solution” to deport asylum seekers, he argued:

We know more than 90 per cent of them [asylum seekers] turn out to be [refugees] and we should be integrating them into an Australian economy where we are going to see, I think in the budget tomorrow night potentially, queue jumpers being brought in, at the interest of the mining corporations.

The term “queue jumpers”, of course, has been the stock-in-trade of politicians confecting cries of “unfairness”, even “injustice”, in immigration policy. Not a description of some real queue but an emotional appeal to distract from well-founded bitterness at the real injustices of a society run in the interests of the rich. The trick, therefore, is the displacement of social insecurity into insecurity about borders or ethnicity. To hear it used in this way by Greens politicians must come as a shock to even the most cynical observers of mainstream politics.

It was almost 10 years ago when the Greens did something very different — valiantly opposing the hysteria around asylum seekers despite being part of a small minority opposing John Howard’s racist wedge tactics. It was one of the major reasons I joined the party the following year. How things have changed.

Of course there was always an unpleasant anti-population wing in the Greens, neo-Malthusians driven by an ahistorical misanthropy that saw our current social organisation and its relentless destruction of the ecology in the pursuit of capital accumulation as eternal. For them, therefore, the only option was a simple cull of the current numbers. When Bob Brown started to push the issue early last year, I thought maybe he was simply playing to that crowd.

Then I saw this:

[Brown] suggested a shift in policy, with more of a focus on humanitarian immigration, and more exports of skilled Australians, rather than an influx of skilled migrants.

“What about skilled migrants coming here being able to stay in their own poorer countries to help raise the standard of living there?” he said. (“Time to address population issues head-on, Brown says,” Canberra Times, 15 March 2010, not online)

Hmm, I thought, why this attempt to counter the right-wing prejudice (“skilled migrants good, asylum seekers bad”) with a mirror image? Surely the targeting of any group of immigrants is part of the problem in a country where migration has long been a political football?

This was just a blip, I was reassured, meant to assuage a few supporters getting riled up by Dick Smith’s formation of a new party on the issue. But then the draft policy backgrounder on population, written in Bob’s office, emerged for discussion before the federal election including further criticisms of skilled migration and this charming passage:

1. What is the optimal population size for Australia?

No one knows the answer to this question – that is why the Greens have moved for an extensive national inquiry to establish a coherent national population policy. Let’s become better informed, let’s not allow false accusations of racism prevent us from having a proper debate. [My emphasis]

The supreme tactic in any dog-whistling operation is, after all, to deflect accusations of racism by supporting a full and frank debate, no matter how laden with prejudice and misinformation it is. Yet even among the Left in the NSW Greens, there was a reticence to take this issue on internally in the lead-up to an election, and so compromise amendments were made but the shift in message not really challenged. The handling of the issue was a major catalyst of my departure from the party at the end of June last year.

The rhetoric continued and during the election campaign immigration spokesperson Sarah Hanson-Young managed this charming tweet:

Family reunion & humanitarian intake quotas must be protected in any cut to migration levels. Biz mig has some fat that could be trimmed

Ah, skilled migrants, just some extra “fat to trim”. Not at all like human beings searching for a better life in our part of the world. And this was happening in the middle of Gillard’s catastrophic attempt to steal the march on Liberal race politics by raising “sustainable population” as a central thrust of her campaign.

How to explain this shift in Greens rhetoric, then? At one level it represents the remnants of a zero population growth lobby in the environment movement more generally. At another it reflects the Greens’ lack of a critique of capitalism’s internal contradictions (between classes and between competing units of capital) that drive its pathological relationship with the environment. Thus, all of society (and hence its individual members) become equally culpable for its destructive tendencies.

But most important is the bind they find themselves in through their desperate desire to conform to the mainstream political process, to be seen as serious, moderate and responsible players. Thus, because official migration policy always assumes that nation states must have border controls that limit immigration, it becomes a game of trading off numbers between migration categories to make up an “acceptable” total. No matter that such policies have always been observed in the breach and that governments have tended to do what is necessary to keep the economy ticking over in corporate interests, in the rarefied atmosphere of Canberra the question of “how many should we let in” can never be answered with “we should allow free movement across national borders”.

It is ironic and disheartening, then, that it has mainly been the libertarian Right campaigning for open borders, although on a basis where people are reduced to the economically self-interested methodological individuals of neoclassical dogma. That the Greens, clearly on the Left of the political spectrum, have been unable to articulate some kind of consistent humanistic defence of all migrants is shameful. That Bob Brown should dismiss the human interests of potential skilled migrants to rail against the machinations of the big business lobbies seeking to import and exploit them (presumably as some kind of populist manoeuvre) exposes the vapidity of his position.

I suppose Brown can sleep at night despite the anger his populist capitulation to anti-immigrant politics might provoke among some of his supporters. If they don’t vote for the Greens, where else have anti-racist voters got to go? Of course they said that about the ALP once, too.