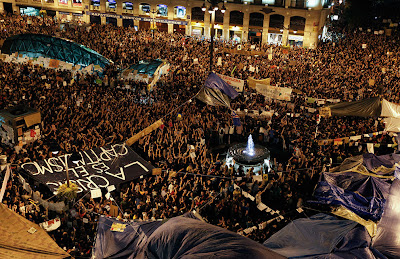 Here’s my rough translation of a thoughtful analysis of the Spanish revolt, which was written for the Viento Sur website a few days ago.
It locates the movement’s origins not just in the economic crisis and austerity measures of the Zapatero government, but the impasse created by the trade union leaders’ decision to back off from confrontation with the government and agree to the cuts after the General Strike last year. It also has some strong words about the relative failure of the radical Left (of which the authors are a part) to have responded as well as it should, yet points hopefully to the way forward.

Apologies in advance for errors in the translation, of which there are bound to be a few. Thanks to Luke Stobart for putting me onto the text.