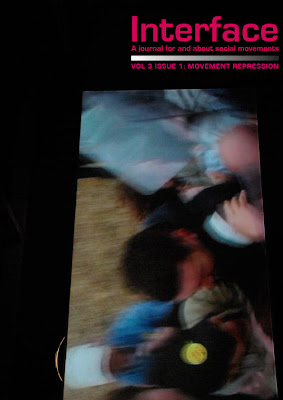 A new issue of the journal Interface was released today: Repression and Social Movements.

I’m the Oceania editor, and am currently seeking a co-editor to assist me with South-East Asia.

Interface: a journal for and about social movements http://interfacejournal.net

Volume three, issue one (May 2011): Repression and social movements
Issue editors: Cristina Flesher Fominaya, Lesley Wood
http://www.interfacejournal.net/current/
Volume three, issue one of Interface, a peer-reviewed e-journal produced and refereed by social movement practitioners and engaged movement researchers, is now out, on the special theme “Repression and social movements”. Interface is open-access (free), global and multilingual. Our overall aim is to “learn from each other’s struggles”: to develop a dialogue between practitioners and researchers, but also between different social movements, intellectual traditions and national or regional contexts.

This issue of Interface includes 296 pages with 20 pieces in English and Portuguese, by authors writing from / about Angola, Australia, Brazil, Canada, Chile, Germany, Guatemala, India, Ireland, Italy, Mexico, Nicaragua, Nigeria, Norway, Pakistan, Palestine, South Africa, the UK and the US. Articles include:

This issue’s reviews include the following titles:

A call for papers for volume 4 issue 1 of Interface is now open, on the theme of “The season of revolution: the Arab spring” (submissions deadline November 1 2011). We can review and publish articles in Afrikaans, Arabic, Catalan, Croatian, Danish, Dutch, English, French, German, Hungarian, Italian, Maltese, Norwegian, Portuguese, Romanian, Russian, Serbian, Spanish, Swedish, Turkish and Zulu. The website has the full CFP and details on how to submit articles for this issue at http://www.interfacejournal.net/2011/05/call-for-papers-volume-4-issue-1-the-season-of-revolution-the-arab-spring/
Volume 3, issue 2 on “Feminism, women’s movements and women in movement” is due to be published in November 2011.

A call for papers for volume 4 issue 2, on “The global emancipation of labour: new movements and struggles around work and workers” will shortly be published (deadline May 1 2012 for publication in November 2012).

Interface is always open to new collaborators. We need activists and academics who can referee articles in Chinese, Indonesian and Russian in particular, and translators to help with our multilingual project more generally. We are also looking for people willing to help set up regional groups in East Asia and Central Asia. We are also looking for collaborators for our existing groups, particularly but not only the African, South Asian, Spanish-speaking Latin American, East and Central European, and Oceania / SE Asian groups. More details can be found on our website: http://interfacejournal.net.