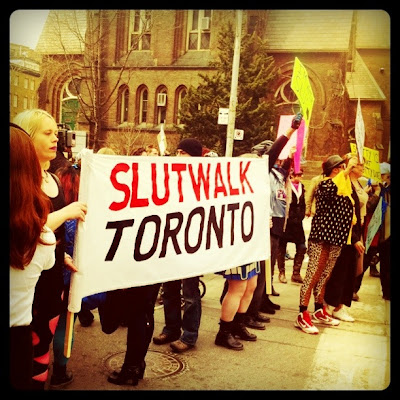 It seems each day there is a new item in an Australian newspaper or online forum about the nature, intention and value of SlutWalk. My lunch breaks of late have been reduced to reading articles and poring over the comments. The related discussion on Twitter seems equally unstoppable, and just when I think the end has arrived another aspect to the debate appears.

This is, to my mind, a very good thing. In recent decades the women’s liberation movement in Australia has failed to gather momentum, and even at the height of the Global Justice Movement in the early noughties there was scarcely a whimper of a revival (compared to say the GLBTI/Queer movement resurgence).

One of the week’s best contributions was from Jacinda Woodhead and Stephanie Convery on ABC’s The Drum. It looked at the distinction of SlutWalk locally, comparing Melbourne and Brisbane in particular, and argued that while the movement is welcome there are ‘next steps’ to be discussed and taken. As the authors point out, murmurings there may be but an ongoing movement is something to be argued for:

Debate is healthy and constructive; it’s how movements thrive and it shapes their demands. A movement that asks for nothing concrete — say, the dismissal of any police officer who suggests in any way that a woman’s clothing is provocation for rape — that invites us all to merely ‘show up’, simply continues the atomised existences we had before the rally. All those individual voices hurling demands is the opposite of collectivity; it becomes white noise.

The entrenching of the primacy of the individual in recent decades has been incredibly profound. The products pitched to women may be Calvin Klein Jeans, moisturiser or cosmetic surgery, but the ideological selling point is freedom and choice. The phrase ‘be free to be who you want to be’ could slot into the advertising campaigns of everything from hair colour to washing machines to international travel.

My agreement with Woodhead and Convery’s article is not universally shared, however. A friend I mostly find myself agreeing with thought it ‘patronising’, a label directed at many in this debate.

For me, the patronisation came thick and fast from the pen of Guy Rundle because — although he made some astute contributions on QandA this week — his piece in Crikey was awfully condescending. I’m not alone in this view, but condescending is not Rundle’s real problem but a symptom, which arises from his inability to appreciate that social movements (including SlutWalk) do not as arrive fully formed, perfect entities. Social movements never are, rather they are always features of the world we live in. While expressing dissent they are nevertheless not external to the societies they criticise. And as such, at times some of their ideas and practices fit better under the label ‘hegemony’ rather than ‘counter hegemony’.

This is not to say that I or others know the perfect form movements should take, or that it is just a matter of guiding a movement towards some ideal, but an acknowledgement that movements are internally differentiated entities with their own unique logics. Turning up your nose from the sidelines will never do. Neither will simply reflecting on one’s own student days through rose coloured glasses of when you were carving it up at Melbourne University with the Bloody Feminists student club (as Rundle does). In my own heady days at the same campus as Rundle, I found events like Reclaim The Night bizarre. I didn’t feel unsafe on the streets of the Melbourne CBD or in the brightly lit inner city, where most of the participants lived, but I did when I had to ride my pushbike home at 1am, from working at Werribee Plaza Pizza Hut, through deserted streets and open wetland areas. Reclaim The Night had its own challenges, not greater than SlutWalk just different.

For the unfamiliar, Slutwalk emerged in the wake of an incident at York University in January this year, when a Toronto Police Officer delivering an information session on campus safety stated ‘women should avoid dressing like sluts in order not to be victimised’. This was no slip of the tongue, as the officer gave a preamble to his comments to the effect of ‘I’ve been told I shouldn’t say things like this’. Outrage on campus ensued and on 3 April some 1500 protesters marched to Police Headquarters, swamping organisers who expected only a few hundred.

While the origins of this outrage may seem small, and for some critics of the movement random, this ignores that sexism remains a lived experience. At the same time that women are dressing to attend nightclubs in clothes the Police Officer would call ‘slutty’, their inability to really live liberated lives pushes against them. Although sexism is experienced differentially because of race, class and other oppressions, many women understand what it is to be called a ‘slut’ because they can appreciate that in contemporary society women are sold a certain image at that same time they are chastised for it when they adopt (and purchase) it.

This new wave of activism is showing that, despite the prevalent idea that we live in a ‘post-feminist’ age, where women can sit back and enjoy their equality, many women and men know the truth — that sexism is alive and well…

Much of the focus in discussions about SlutWalk has been on the use of the word Slut – in particular debates over reclaiming that word (see here, here and here). And I’m with Mindelle Jacobs when she says:

Other than the terrible c-word, is there a worse word, a word more laden with misogyny, myth and the wretched history of cultural indoctrination than slut?

But this seems at this conjuncture — that of an emerging movement — an irrelevancy. And unlike a number of critics of SlutWalk, I think it is flawed to approach the event as simply about re-appropriating the term, or as some kind of novel and provocative protest of the university educated. While the stated aim of some SlutWalk events is to take back the word, the tone varies greatly (see the Sydney and Brisbane Facebook event pages) and there is some subtlety to what this might mean in practice.

On QandA two weeks ago, Pulitzer winning novelist Michael Cunningham articulated some of this gradation when asked about reclaiming language. He noted that reclaiming words was something activists did more generally, that in calling themselves gay or queer they could then say to others ‘go on call me queer’ and the word would have more limited effect. His response, variations which I have heard argued before in a number of social movements, seems more a defensive strategy and a rejection of shaming than a project of reclaiming language in and of itself. This is not to say that some in the movement are not especially focussed on reclaiming the word, or celebrating being a ‘slut’, but looking at this as the dominant feature at a time the movement form is still emerging, and when debate is raging internally, is a error.

There is another language question in this matter, which I see as far more important. It was highlighted for me by the ironic tweet from @benpobjie quoted in the Woodhead and Converey article. The word ‘protest’, and its synonym in activist circles ‘demonstration’, has been notably absent in some contributions to the debate. For example, the Slutwalk Toronto site’s extensive ‘About’ section (which covers four details pages titled How, What, Who and Why) does not use the words ‘protest’ and ‘demonstration’ in relation to SlutWalk ‘events’. This is a bigger issue than that of reclaiming language, and demonstrates why the dividing line in this debate is not between those who are and aren’t comfortable with the word slut but between those who see the need to build a movement for women’s liberation that can tackle the questions arising in a neoliberal world (as opposed to those untroubled by liberal individualism).

In the end my personal approach to SlutWalk is as simple as this: The essential element of SlutWalk is both ‘correct’ and important to say loudly and often — women should not be demonised for what they wear or their sexual choices. The further step that needs to follow is for the more general question of contemporary gender inequality to be tackled. SlutWalk is important because it yells its initial message to all that it crosses paths with, but also because those involved in it can be part of a wider revitalisation of a movement for women’s equality.

So although I am critical of Rundle, I cannot join with the likes of Sabine Wolff (a researcher at the Institute of Public Affairs) in condemning him for ‘lamenting the death of the earnestly serious second-wave feminism of the late 1970s and 1980s’. Women’s liberation remains a serious business, in particular given the disproportionately worse position of many women as the fallout of the GFC bites. Wolff epitomises much of what is wrong with the new ‘feminism’ or ‘post-feminism’ when she says:

I am not a spokesperson for my entire generation of women. However, I would cautiously guess that, like me, many young women aren’t particularly interested in separatist feminism or eschewing nice undergarments. I care about having the freedom to make my own choices, and having those choices respected.

Well break out the IPA champagne, another woman has bought the lie that choice under neoliberalism leads to liberation. Wolff might not want to make a toast yet though, given the IPA has zero women on the governing board and only five of the 25 staff listed on the website are women. Then again, perhaps she also has that strategy of busting glass ceilings and letting the crumbs of her individual choices and efforts trickle down the women below.

Time for a real fight, I’d suggest. One that looks at SlutWalk for the possibilities embodied within it, for a new, angry and aggressive women’s movement that demands more than the shabby choice of the market and the hollow promise of the ‘free’ liberal individual.