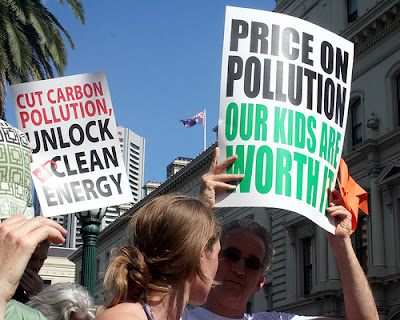 ABC’s The Drum has published an article today by @Dr_Tad and I about the reliance on market mechanisms to solve the climate crisis. We take on the accepted wisdom these mechanisms can adequately deal with the climate crisis, or that they are the only option. Moreover, we argue the debate is a distraction harming the climate movement and likely to see its demobilisation and defeat.

Yet it is precisely the immediacy and magnitude of the threat that leads us to reject the argument put by Wayne Swan in his speech to the National Press Club this week, that the “only way to drive investment in [clean-energy] technology is to put a price on pollution. Only a market mechanism does the job”. Instead, we believe that seeing a “price on carbon” as central to a low-emissions future, whether in the form of a carbon tax or trading scheme, is both inadequate to the task at hand and a dangerous distraction from effective climate action.

Furthermore, while many people who want serious climate action have understandably thrown their weight behind the current carbon tax proposal being formulated in Canberra because at least “something” is being done, we believe this represents a political dead end for the climate movement which will constrain the possibilities for demanding more serious action in the future.

You can read the full article here.

We have previously taken on issues of climate change and the environment in many other posts. The best ones to start with are “The ETS and CPRS: Neoliberalism by any other name” and “Science cannot save us: The politics of climate action”.