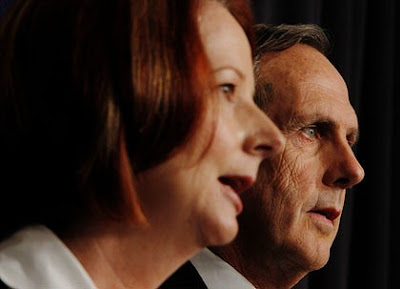 This is what the climate movement, the Greens and sections of the Left have staked their futures on:

[I]n Australia, the push for carbon pricing originated from the Treasury as a pro-market economy-wide reform whose great advocates were Ken Henry, Martin Parkinson and Ross Garnaut with their ideas holding sway with John Howard, Rudd and Gillard as successive PMs. Indeed, among insiders the power of carbon pricing as the next stage in Australia’s pro-market reform process has been fundamental to its traction.

Please recall how the last great ALP-led market reform process went in the 1980s and 90s: Real wage cuts, a massive shift of national income from labour to capital, a sharp rise in economic inequality, the collapse of trade union membership and the hollowing out of Labor’s historic electoral base. Big wins, indeed.

Now the pursuit of a carbon price has drawn in the party that had staked a position firmly to the Left of the ALP, the Australian Greens. A party that initially won support from Labor’s base for its refusal to simply fall into line with the hegemonic neoliberal and neoconservative convergence of the major parties, and benefited spectacularly from the electorate’s refusal to give a mandate to either major party last year.

Now it is about to become jointly responsible for the next stage of neoliberal reform in Australia. Let’s be clear about the politics of this for a second. A carbon price is a neoliberal policy. It is a political weapon in the hands of elites and not ordinary people. And it has nothing to do with a scientific response to the overwhelming body of expert scientific that climate change is human-caused, real and potentially catastrophic if we don’t act.

Kelly, in his typically elite-centric way, outlines how Gillard must act if she is to deliver on climate action for ruling class interests:

There are two iron rules here. First, the more exemptions and concessions, the more inefficient the scheme and the higher the cost of abatement. Second, the weaker the policy framework, the more Abbott will say it’s a tax that won’t achieve its purpose.

The policy and political constituency Gillard must hold together around this package is daunting. But staring into her own doom Gillard must operate from one principle: backing her package with a Thatcherite resolution.

To do that she will need to make sure that left-wing opposition remains in a supine position, terrified into believing that — no matter how bad Gillard is — Abbott will be much worse. She needs to keep the Greens and the Left prisoners within her strategy. Will we have the clarity and courage to break out and say “no”?