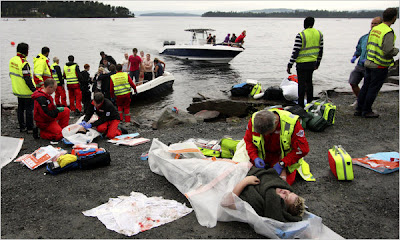 This weekend was a salutary lesson in how terrorism is treated by the media and political establishment. The lesson may surprise you, because there are two narratives constructed:

Firstly, with outrage, linking of associations on the basis of zero evidence, calls for continued military action and tightening of domestic security (read: curtailing civil liberties) to fight the terrorists, and defence of the liberal freedoms that make “them” hate “us”.

Secondly, with sober reportage, calls for reflection rather than “politicised” reaction, with careful examination of the terrorist’s motives, sensible collateral information from family members and experts, and even sympathy for his grievances.

The first approach is simply the set response to Islamist terrorism, especially since the events of 9/11, almost exactly 10 years ago now. And it was on display in the hours after the atrocities in Oslo and the island of Utoya. Rupert Murdoch’s The Sun, as if his editor didn’t realise how much trouble he was having currently, immediately seized on the attacks as a Jihadist plot with this front page: 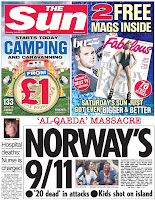 Neo-con opinion makers in the US, like the Washington Post’s Jennifer Rubin, immediately jumped on the same bandwagon, quoting security “experts” on the Islamist nature of the attacks and using the opportunity to demand a freeze on any cuts to defence spending, reminding Americans that this would mean “curbing our ability to defend the United States and our allies in a very dangerous world”.

The Wall Street Journal, meanwhile, rushed up an editorial Friday, blaming “jihadists” for the attacks and exclaiming, “Norway is targeted for being true to Western norms”:

… in jihadist eyes, [Norway] will always remain guilty of being what it is: a liberal nation committed to freedom of speech and conscience, equality between the sexes, representative democracy, and every other freedom that defines the West. For being true to those ideals, Norwegians have now been asked to pay a terrible price.

As more information came out about the attacks and the attacker, the WSJ rewrote the online version of the editorial, albeit by removing any trace of the above paragraph. Instead, it mentioned that it had falsely attributed the attacks to jihadists and called the attacker an al Qaeda “copycat.” [Emphasis added]

The same logic was at play locally in Andrew Bolt’s blog: “Once the identity of the attackers becomes known, the consequences for Norway’s immigration policies could be profound.” It’s now been edited in retrospect including this justification:

(UPDATE: i’ve removed here an excerpt from the first report I linked to spelling out the earlier Islamic threats and attacks that led many, including the Guardian and New York Times, to initially suspect an Islamic attack. I had left it up so as to explain the context of my original reaction, and so not to seem I was trying to cover up my original suspicions. Now I find that leaving it up is being interpreted as my insisting on a gratuitous point instead.)

The focus on Islamist terrorism has always been part of the general climate of Islamophobia whipped up in the “War on Terror” than any facts on the ground. As Juan Cole has pointed out, Europol has repeatedly recorded that Islamists are a tiny part of the mix of terrorist threats and actions across the continent.

Sympathy with the oppressors

Now the facts are in, the media is suddenly hard at work downplaying the hysteria. So we’re treated to carefully reconstructed accounts of the killer’s childhood and political views. His motives in attacking the youth wing of a Left of centre political party are detailed as part of a “calculated” (if horrific) plan.

Andrew Bolt now claims Breivik is not a real Christian because of what he’s done, in a complete reversal of his repeated linking of Islam with violence. We should “look not as his creed but his wounds”, descending into pop psychology about his traumatic upbringing. Bolt reminds us, “[E]xtremes of the Right and Left are indistinguishable,” just in case you thought we were talking about a right-wing terrorist here.

The Guardian can see fit to reprint commentary by a former member of Sweden’s far-right New Democrats, which minimises its racist policies while suggesting the real problem was that too many hate-filled people were allowed to run riot in its ranks — as if the two are so easily disconnected.

There are two things we learned on Friday afternoon. One: extremists are found in all groups, and all are at least as dangerous. Two: hatred breeds hate. Never help to spread it unless you are ready to take the consequences.

More insidiously, the coverage has expressed some agreement with the motivations that drove Breivik to his crimes. The New York Times, in its detailed dissection of the rise of far Right sentiment across Europe, writes:

A combination of increased migration from abroad and largely unrestricted movement of people within an enlarged European Union, such as the persecuted Roma minority, helped lay the groundwork for a nationalist, at times starkly chauvinist, revival.

Such an analysis could easily have come from Breivik’s own mouth. It is the ultimate in sympathy with the oppressor, justifying anti-immigrant racism on the basis of the immigrants themselves. Recall the hysteria when people pointed to the grievances that drove Islamist terrorists — Western military occupation of Muslim countries, support for brutal dictatorships — we were told that this was outrageous and that it was all about “them” hating “us” for our way of life. Yet those grievances had a basis in reality rather than febrile racist ideology, even if the terrorists’ methods were a disaster for the struggle against oppression.

One response to the media’s astounding ability to jump to conclusions and whip up prejudice has been an understandable desire to see this is a chance to more soberly assess and reflect on what has happened, to understand political violence rather than engage with a left-wing mirror image of the Right’s hysteria. This was the position put by Mark Bahnisch at Larvatus Prodeo yesterday, and while I am sympathetic to the argument I think it doesn’t deal with the reality of how this is playing out.

I’m not advocating that we get all Chicken Little about this, but the problem the Left now faces is precisely the cold, measured approach the media and political establishment are taking to the issue of far Right extremism. Because, in its own way, that is just as seductive a narrative as the exaggerations, lies and racialist paranoia driven around Islamist terrorism. Its function is to settle fears, to isolate “extremists” as “lone gunmen” divorced from wider political developments, to paint a picture of a healthy society whose only internal threats are aberrations.

It is vital for the media, the political class and the state to create a particular narrative here because to shine the spotlight on liberal democratic societies that could produce such reactions would be a bridge too far. Yet if one thing has been true of modern societies it is that when profound social polarisation occurs, so the fringe voices of the extreme Right can gain a hearing. Those voices articulate not a class solution to the social problems that sharpen in periods of crisis, but a national one built on scapegoating and authoritarianism.

That ideological framework doesn’t simply arise spontaneously at the fringes; it is conditioned by the reality of how states operate to manage social divisions within national boundaries (see here for Left Flank on nationalism in the era of neoliberalism). My prediction is that it will not be long before mainstream politicians seek to assuage the “rising tide” of racism in Europe by pandering to it, talking of “understandable” grievances and the need to “manage” multiculturalism more closely. The far Right is a small but very serious danger in a Europe increasingly racked by economic turmoil. But it is the official discourse, frequently peppered with pronouncements about the “failure” of multiculturalism, which is a key part of the problem. What’s more, states have the power (which they frequently exercise) to actually repress, control and expel migrants.

If his writings are to be believed, Breivik seized upon a common point of anger expressed by right-wing extremists: The failure of governments to act against “Islamicisation” and multiculturalism. This is a signal feature of fascism, the need to act outside the state when it won’t go far enough in the national interest. Indeed, in language similar to Nazism’s rantings against the ever-present menace of “Bolshevism”, Breivik railed against the “cultural Marxism” of the very mainstream Norwegian Labour Party. That the language is not so different to repeated accusations by leading Australian right-wingers of Julia Gillard’s “socialism” or the Greens’ “environmental Marxism” should give pause for thought about the forces they may be legitimating.

It is therefore important to not accept that the media’s softly-softly approach here as a sign of a new maturity. It is precisely because the media is so deeply implicated in the last decade of state-sanctioned Islamophobia and diminution of civil liberties that it is rushing to frame a story that perpetuates a lack of comprehension about the links between the extreme Right and how governments have managed social polarisation with the media’s collusion. Indeed, they will do so alongside a continuation of the very anti-immigrant tropes that fostered the current climate.

If they were being truly reflective, they would be angrily going after the “mainstream” political system (of which they are a key part) that encourages extremists’ paranoia, hatred and violence. I’m not holding my breath.