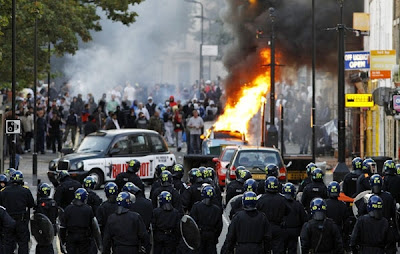 What did people expect? Just over a year ago, during the general election campaign in Britain, I remember George Galloway on the stump warning that the last time the Tories came in to replace an already dead Labour government and pursue full-blooded, class war policies, Britain’s cities went up in flames. That was 1981. Three decades later the Sunday supplement features on Brixton, Toxteth and St Paul’s all situated those events in the aggressive policing, racist exclusion and darkening hopes of the young of the time.

The same papers in 1981 had amplified the Tories’ denunciations of the “mindless criminality” of those who rose up, and foreshadowed the hapless John Major’s injunction to “condemn more, and understand less”. That the Tories and the Right are doing the same today comes as no surprise. They cannot accept that it is their policies, building on many more years of social polarisation and stigmatisation of the poorest that are the condition which has produced today’s riots. In a similar way, the Blair government could not bring itself to accept that its policies — at home and abroad — created the circumstances in which the 7/7 attacks took place in London in 2005. There was a hue and cry against anyone who said we should try to understand. Yet within a year, that understanding had become commonplace — from the analysts of MI5 to the mainstream of the labour movement.

A comparable political battle is now underway. For underneath all the attempts to create a moral panic and all the wearily predictable responses that knee-jerk from various ideological positions, this is above all now a political question. Its outcomes will provide the backdrop for the coming months in which the full force of the Con-Dem structural adjustment programme is felt and, as seems quite likely, further devastating measures are taken as the centres of the world economy hover above another frightening spiral down to depression.

For the Left as well, what could we reasonably expect? There is an uncomfortable truth which some on the Left are seeking to sidestep — with hyperventilated condemnation of the looting in direct proportion to the stubborn facts they try to ignore. The Left and labour movement have failed to provide thus far an answer to the despair that is ripping through society. So that section of liberal Left opinion which is indulging in the most illiberal calls for retribution against the rioters is engaged in a double flight from responsibility: first in abandoning basic social democratic values which hold the rich and powerful responsible for the social conditions in which the poorest live and the bitterness that flows from that, rather than the “fecklessness” and “amorality” of the poor themselves. We have a contemporary gloss on this old reactionary contempt for the poor — people tweet from smart phones or blog from fast wi-fi connections about the selfish materialism of those who loot those things from High Street chains or who, denied a decent credit rating, rob from one of the “Money Shops” or other rip-off outfits that have sprung up in empty stores like modern-day tributary outposts of some ancient parasitic empire.

The second indulgent irresponsibility is deny that the failure or worse of the progressive coalition that has historically been headed by Labour to address the injustices that have been growing for decades is itself a large part of the problem. Worse still, it’s wrapped up in a faux concern for working class communities whereby those who are now being given appalling sentences are regarded as not part of the working class, not part of the decent community of “hard-working families”.

Some of those who are pumping out this reheated Victorian ideology of the deserving and undeserving poor have also been telling us, seemingly paradoxically, that Labour did fail to relate to its working class core and that, as the Blue Labour bandwagon puts it, it needs to reconnect with it.

The persistence of racialisation

The paradox is only apparent, however, and is resolved with the ubiquitous solvent of racialised or ethnicised pseudo-explanation and prejudice.

For many years the Muslim and more recent immigrant communities have been held to be the central obstacle to what was termed “social cohesion”. With government policy held immune from predicted consequences like 7/7, those communities were held to blame. A section of the liberal Left sank into the scapegoating quicksand. But older prejudices, born out of the need for false explanations of society’s ills, never went away. Now, with the return of “urban” unrest comes the recrudescence of the barely coded language of “gang”, “inner-city lawlessness”, “criminality”, “absent father figures”, “scum”… black. It has been bubbling away for years with so many on the liberal and centre Left taking it as just a natural state of affairs that black children, of primary school age, are three to four times more likely to be excluded from school, 26 times more likely to be stopped and searched and far less likely to be in the best universities than their white counterparts. There were the clichéd articles about “urban” hip-hop corrupting even white middle class kids. And knife and gun crime, rolled out as a political football by Boris Johnson and the Tory papers before the last London Mayor election, only to be kicked back into touch once he was in.

Riots by their very nature involve inchoate violence as well as more consciously directed acts. Now we are witnessing further attempts by the government and authorities to avoid responsibility and sow division with new racialised narratives. Yesterday, it was Muslim communities that were self-segregating (refusing to mix, unlike African-Caribbeans) and breeding criminality. Today they are the hard-working shopkeepers defending themselves against the mob. Just as some black people may have felt relieved that they were out of the crosshairs for much of the last two decades, so some Muslims may feel the same today. But to do so would be foolish.

What we are seeing with the desperate attempts by the state and a weak government to shore up their position in the face of the first whiff of the kind of social explosion that is spreading across Europe is that there are no depths to which they will not sink to balkanise our society so that a fantastically wealthy elite can cavort in comfort. The immense scale of the austerity offensive adds up to a class war unprecedented for 70 years. As before, the shock battalions in that war are vicious scapegoating of the marginalised, and manifold racist divide and rule.

There is nothing more cowardly in those circumstances for the left to concede that ground, or self-satisfiedly to proclaim that they would sympathise with those who are lashing out if only they did so in a more organised fashion, more constructively, with more regard to building a majority social force against the government, more… more like what we would do. But we haven’t done so effectively. And this is one consequence.

Truly recognising this means that things cannot go on as before. An effective response to this government and the historic structural adjustment it wants to impose cannot be whistled up out of thin air. But the Left can single-mindedly and with unity of purpose seek to build on the beginnings of that resistance. That requires relegating to their proper place differences of opinion on secondary matters and instead holding to an uncompromising opposition the racism and class prejudice that are the great weapons in the other side’s arsenal.

* Kevin Ovenden lives in London. He was a participant in the first Gaza Flotilla in 2010 and is the author of Malcolm X: Socialism and Black Nationalism (1992). This article is cross-posted, with his permission, from his Facebook page.