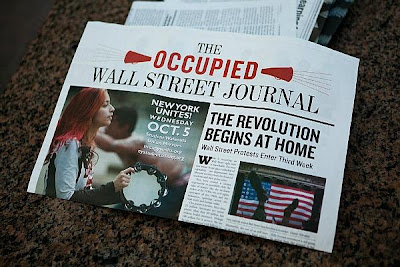 During protests in Egypt to overthrow Mubarak, a protester displayed a handmade sign that said ‘Egypt Supports Wisconsin Workers – One World, One Pain’.

The sign broke all the rules: it was terribly written, hard to read even up close, had a confusing graphic of a wrench and cog within the writing, and the text went in two directions. Yet it, more than any other, flooded my Facebook and Twitter feeds.

In recent weeks as the Occupy Wall Street protests have grown, comparisons between them and the Arab Spring have been made, with some noting ‘though the two movements have many differences, they share the same fundamental drivers: a deep sense of injustice and invisibility’.

Yet how quick are conservatives — such as Chris Berg from the Institute of Public Affairs — to try and paint those who make such comparisons as ‘trite’ and ‘facile’. ‘Rebels without a cause indulge in delusions of revolution’, the headline to his article bleats. He tells us that those protesters in the Middle East were complaining about real problems, like corrupt governments and despotism, whereas the New Yorkers and other ring-ins on Wall Street are whingers and self absorbed. They don’t even know what a bad situation looks like.

The problem for Berg, and the many committed to neoclassical economics and the neoliberal project, is that Occupy Wall Street makes clear something very simple and which many have known for some time: neoliberalism and free market policies are deeply, deeply unpopular. Moreover, they are now biting the working class hard and many do not want to accept the austerity measures that have come with the recent global economic crisis, not for nothing being called ‘The Great Recession’.

The free market is, after all, not so very free for the 99 percent. As David Harvey points out in A Brief History of Neoliberalism, quoting the famous political economist Karl Polanyi, ‘this neoliberal debasement of the concept of freedom “into a mere advocacy of free enterprise” can only mean … “the fullness of freedom for those whose income, leisure and security need no enhancing”’. So much for the libertarian and freedom-defending and Berg his IPA employers.

But what are Berg, and others like him (see here, here and here, for example), really trying to do?

They want to argue that the protests in the Middle East are legitimate because they concern themselves with shady and repressive dictators, but there is nothing wrong with the economic system of capitalism that underlies it. In this way, Occupy Wall Street must be painted as illegitimate. Chris Berg calls the Wall Street protesters trite, small, against consumer capitalism, simply ‘annoyed’ with corporations and wanting to diminish those good Arab Spring protesters who are fighting murder and torture. And in a sleight-of-hand he also tries to elide them with the participants in the London Riots, saying ‘we all know’ those Brits were immoral as three quarters had criminal records.

It is telling, then, to reflect on Berg’s immediate reaction to the Egyptian Revolution. Writing at The Drum on 15 February, he claimed that Mubarak’s neoliberal reforms led to the uprising not because they had caused rapidly rising inequality, poverty and hardship but because political reform had not followed great economic strides caused by trade liberalisation and privatisations. Yet he can only cherry-pick a single statistic to make his economic case, a fall in the unemployment rate from 12 to 9 percent between 2003 and 2011. This hides the increases in poverty since neoliberal reforms began in the 1990s, it treats as an aberration the appalling concentration of wealth among the neoliberal reformers themselves, and it ignores the devastating effects of the GFC:

… unemployment in Egypt rose and the prices of food and fuel rocketed. For the first time since the 1970s there were acute shortages of flour and tragic scenes in which people fighting for access to bread died in conflicts at street bakeries.

What events like Occupy Wall Street show is that even in the face of the extreme economic hardship in the US (see Jim Forbes piece in The Drum going over the US malaise), right-wing commentators like Berg have little interest in justice for the many and will defend the right of the few to continue the extreme exploitation at the heart of US capitalism. This should not come as a surprise. The market model Berg and the gaggle at the IPA worship has made the US one of the most unequal and unhappy societies on the planet, ironically enough considerably more unequal than Egypt. Like all good paid prize-fighters for the capitalist class, Berg wants freedoms limited to those that won’t challenge the 1 percent’s wealth and power.

Over the next few weeks Left Flank will carry more posts on Occupy Wall Street, its offshoots in other US states and other countries.

If you are reading this in Australia then you can be part of things at the start – here are the details for the major occupy events coming up this weekend: