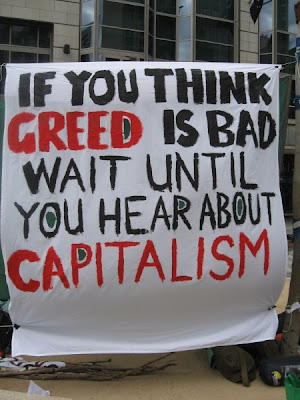 There are times when living in Australia is a bit like living in a bubble, sequestered from the massive economic and political convulsions that have marked 2011. It is the kind of situation that allows prominent progressive bloggers, like Greg Jericho (Grog’s Gamut) and Scott Steel (Possum Comitatus), to spew venom and ridicule at the modest run of #occupy protests that have hit capital cities in the last week. Sure, they argue, things may be really bad in the United States where Occupy Wall Street has become the epicentre of a rapidly growing and multifaceted social movement, but there’s no excuse for the kind of nutty, far Left indulgence of the Australian iteration.

Don’t these protesters realise how lucky we are, how good economic management by the government and RBA (with help from sound financial sector regulation), has prevented the kind of policy failures that have led to economic catastrophe and a 1 percent — 99 percent scenario in the US? Jericho has also made fun of occupiers needing multiple working groups to organise themselves, and compares them to Tea Party style “nutters”. Meanwhile, Possum (see his Twitter feed) has been livid that the protesters haven’t come up with concrete policy demands or blueprints —fulminating about their protest being “ideologically” (rather than “empirically”) driven and detracting from the hard policy slog of reformist politicians and bureaucrats. Their views are not so far removed from that of the Wall Street elite, which has privately rubbished the movement as “unsophisticated”.

That such vitriol is being delivered by ostensibly progressive writers means the Right’s job is that much easier. Of course, it hasn’t stopped The Australian taking the argument to another level, not only reminding its readers how great liberal capitalism is but seemingly taking inspiration from Bertolt Brecht’s line, “Would it not be easier for the government to dissolve the people and elect another?” when writing off the protesters’ grievances:

When protesters suggest 1 per cent of us run the other 99 per cent, demand “human need instead of corporate greed” or claim we don’t have a “real democracy”, we ought to listen. Not because they are right but because we should be concerned that people feel so disengaged from the systems that support them.

Quite what this disengagement represents remains unexplained, and it is to this that I want to turn, because in their reactionary way The Australian’s leader writer is closer to the mark than some of #occupy’s left-leaning critics.

The problem with the Jericho-Possum type of analysis is that it seeks to find the cause of the US protests pretty much solely in the level of hardship being visited on that country’s population by the Great Recession. Therefore, while protests are understandable (even if misguided) there, in Australia they are meaningless. Yet while hardship has been a major factor driving the rapid growth and spread of the American movement, drawing in large contingents of ordinary working people of different ethnic backgrounds, it cannot be understood as simply or mainly a response to some absolute level of immiseration. It is a movement that specifically argues these problems are the result not of bad policy choices or particular political parties; rather, the problem is a whole system of elite rule, which has subordinated politics and government to a tiny minority’s interests. The idea of the “1 percent” draws on specific statistics about patterns of US wealth distribution over the past few decades, but it is also clearly meant as a descriptor of what Marxists would call a “ruling class”.

Thus it is a non sequitur to quote statistics showing how much better off Australians are than Americans in terms of inequality or poverty — precisely because the #occupy movement is opposed to a set of power relations that systematically create inequality and poverty. Then again it is worrying that progressive critics are trying to make such a positive case about inequality and poverty here while the top 20 percent own 60 times the wealth of the bottom 20 percent, and when there has been a lot of worrying data released as part of Anti-Poverty Week. What exactly is it they are defending?

Having participated in Occupy Sydney on four occasions for a few hours at a time, I am yet to meet a single activist who thinks that Australian conditions are identical to those in the US, but almost everyone sees these as part of systemic global processes that are stacked against ordinary people. Of course the depth of the crisis and its local consequences have played a role in shaping the size, social breadth and politics of different “take the square” movements internationally — for example, the high rates of unemployment among tertiary graduates in the US and Spain, or the militancy of the unions in Greece. But the logic is the same, a reaction to globalised neoliberal capitalism in crisis.

The social basis of a global movement

US foreign policy realist Stephen Walt, hardly a fringe radical, describes well the factors that have led to the rapid spread of occupations despite the differing conditions in various countries. He lists: (1) Economic globalisation causing growing inequality between and within countries, (2) new technologies allowing much more rapid spread of information, and (3) the “incompetence and/or corruption of governing elites … and the tendency of governments to do too much to protect wealthy and powerful interests and not enough to help ordinary people”. Paraphrasing a colleague, he adds that, “the present combination of economic inequality and political gridlock is fatal to the proper functioning of democratic orders”.

Similarly, the economist Nouriel Roubini has reflected on the wave of revolt sweeping the globe in 2011 as resulting from growing inequality:

Any economic model that does not properly address inequality will eventually face a crisis of legitimacy. Unless the relative economic roles of the market and the state are rebalanced, the protests of 2011 will become more severe, with social and political instability eventually harming long-term economic growth and welfare.

Such problems are clearly not amenable to steady-as-she-goes policy wonkery, not even the well-meaning variety. The pattern among all Western governments, Australia’s included, is not gradualist amelioration of poverty and inequality, but its intensification. Sure we are not suffering a program of attacks on ordinary people of the sort being rammed through by the Greek government at the behest of Eurozone bankers and financiers, but the Gillard government’s agenda has been one of cuddling up to mining billionaires, deferring to big polluters, and seeking to inflict punitive measures on welfare recipients and Indigenous people. A funny kind of reformist social democracy, this one.

To understand what is really happening it’s more apt to turn to the words of Antonio Gramsci, which Left Flank has quoted before to describe the current conjuncture:

In every country the process is different, although the content is the same. And the content is the crisis of the ruling class’s hegemony, which occurs either because the ruling class has failed in some major political undertaking, for which it has requested, or forcibly extracted, the consent of broad masses … or because huge masses … have passed suddenly from a state of political passivity to a certain activity, and put forward demands which taken together, albeit not organically formulated, add up to a revolution. A “crisis of authority” is spoken of: this is precisely the crisis of hegemony, or general crisis of the state. (Selections from the Prison Notebooks, p. 210)

In such a crisis, the description of politics as “the art of the possible” loses its meaning, precisely because the institutions limiting the horizon of what is possible (parties, governments, bureaucracies) are incapable of playing this role, incapable of channelling discontent into safe and passive cul-de-sacs. Those who seek the reasonable middle ground — who chastise radicals for being dangerous dreamers instead of hard-headed pragmatists, who pine for a return to serious elite policy-making, who shake their heads at governance by crisis and panic — are victims of a situation where the centre cannot hold.

The protesters occupying public space may still only have the passive support of large sections of the Australian population, but they have done something very important — given a voice and shape, however inchoate, to a new culture of resistance and rebellion. By doing so they have also exposed a crisis of authority from which our rulers are no longer immune. Today’s heavy-handed response by the police in Melbourne should not be mistaken as a sign that the state is happily reasserting control. Similar attacks on occupations in Madrid, Barcelona, Athens and New York have only strengthened the resolve of protesters to build their movement, and broadened their support. In each case sections of the commentariat opined that this was it for the movement, but in each case they were proven wrong because the social reasons for the protests ran deep.

Comparing the revolutions that swept Europe in 1848 with today, The Independent’s Andreas Whittam Smith argues: “There are two characteristics of a pre-revolutionary situation — a valuable insight widely shared [the intolerable gap that has developed between rich and poor] and the endurance of those who hold it,” before adding, “We have the first, but it is not yet clear whether we have the second.”

The coming days, weeks and months will answer that question, both overseas and in Australia.