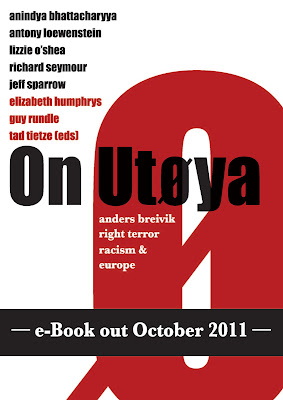 On Utøya: Anders Breivik, right terror, racism and Europe is now available at Amazon. An overview of the essays, and details on how to buy it, are also on our website. You don’t need a Kindle or an iPad to read it — you just download a free app to your PC, Mac or android smartphone.

And for Sydney people, please join us and Senator Lee Rhiannon & Antony Loewenstein at the launch THIS WEDNESDAY:

See a map of the location here.

An overview of On Utøya from the publishing details…

The teenagers who gathered at Utøya that day could not imagine that they would be enrolled in the ranks of those murdered by the Right.

In a challenging new book, a collection of Australian and British writers respond to the terrorist attack by Anders Breivik, and attempts by the Right to depoliticise it.

On July 22, 2011, Anders Breivik, a right-wing writer and activist, killed more than sixty young members of the Norwegian Labour Party on Utøya island. Captured alive, Breivik was more than willing to explain his actions as a ‘necessary atrocity’ designed to ‘wake up’ Europe to its betrayal by the left, and its impending destruction through immigration.

Breivik’s beliefs – expressed at length in a manifesto, ‘2083’ – were part of a huge volume of right-wing alarmism and xenophobia that had arisen in the last decade. Yet Breivik, we were told by the Right, was simply a madman – so mad, in fact, that he had actually believed what the Right said: that Europe was in imminent danger of destruction, and extreme action was required.

On Utøya: Anders Breivik, right terror, racism and Europe is a response to this attempt to deny responsibility, and any connection of Breivik’s act to a rising cult of violence, racism, and apocalyptic language. The editors and authors shine a light on Breivik’s actions, and argue that they cannot be understood abstracted from the far Right racist and Islamophobic social and political conditions in which it emerged.

Organised, written and produced within three months of the killings, On Utøya is a challenge to anyone who would seek to portray this event as anything other than it is – a violent mass assassination, directed  against the left, to terrorise people into silence and submission to a far-right agenda. It concludes with an examination of the manufacture of hate and fear in Australia, and considers what is needed in a Left  strategy to deal with the growing threat of far Right organising.