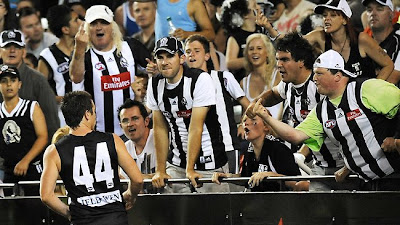 St Kilda player Stephen Milne provoking the Collingwood cheer squad, as reported by a Federal Court Judge part of the squad that day.

ABC’s The Drum recently published an article by me on Collingwood Supporters and class hatred, related to some of the issues I’ve previously discussed here at Left Flank. Below is the article in full.

Given hype from the AFL Grand Final has dissipated (and yes, congratulations Geelong supporters), perhaps we can talk about Collingwood a little. In particular, the way we refer to Collingwood supporters.

I’m a Carlton member of many years and a third generation supporter. The Collingwood-Carlton rivalry runs deep. I received a single SMS from my brother after the Grand Final, where he said: “There is only one thing better than the Blues winning, and that is Collingwood losing”. I let you know this as context for what follows.

There is a joke I used to tell about Collingwood. It goes like this:

Question: What is the difference between an Essendon and a Collingwood supporter?

I always thought the joke was very funny, and on one level I still do. The retorts from Collingwood supporters – often about soft-skinned, blond-headed Carlton players and silver spoon-fed CEOs – always came thick and fast. As many readers would know, it is not like Collingwood supporters to be caught without an effective comeback.

But while the isolated jokes might be in jest and part of a proud tradition of the Blues’ and Pies’ rivalry, in the last few years they increasingly seem to come with a dose of abhorrence for working class people.

My joke is only one of dozens of similar gags I have heard over the years, but the last two grand finals have seen jokes include a rush of working class hatred to boot. They draw on common tropes levelled at the black and white army: that they are illiterate, uncouth, foul-mouthed, publicly housed, drunk, criminal and racist.

For example, Catherine Deveny tweeted before the 2010 Grand Final:

“If Collingwood wins in 9mths time there will be an epidemic of babies born with mullets, lovebites and neck tatts called Jaidyn.”

And on Facebook there is a group called “What has 100 legs & 4 teeth? The front row of the Collingwood cheer squad“.

Another common way of describing Collingwood supporters is that they are “bogans”. On the Things Bogans Like website contributors write comments such as:

“Collingwood = Things toothless bogans like” and “The Collingwood Football Club should be spared from this site, and would be better utilised on ‘Things prisoners like'”.

And on Twitter during the Grand Final we had “Bogan is the best Australian word and the word usually in front of that is Collingwood fans!!!”

Collingwood Supporter is even a “term” defined on the Urban Dictionary website:

An illiterate Bogan who has little or no general knowledge on any topic to that isn’t to do with Australian Rules Football. They are incappable [sic] of dealing with a loss of a game, and claim it is always the umpire’s fault even though they kissed dale thomas’ ass the whole way through the game. Typical ways to pass the time including getting dressed up into your favourite flannie and ugg boots, combing the mullet and going down to “norflanz” to have a drink with fellow supporters near the bus stops. While at the game, it is tradition for a supporter to have at least 12 VBs before half time. It is also important to try and pick a fight with anybody supporting an apposing team: Normal Person ‘Hey what footy team do you go for?’. Collingwood Supporter ‘I goes fa collingwood the best f’in team in thaa AFL, if ya doesnt like them i’ll  kick ya arrrrsee in!’.

It is worth noting that historically many of the inner-Melbourne AFL clubs had a good proportion of their supporter base in the working class communities of those areas.

Carlton, for example, found many followers in the newly-arrived Italian and Jewish communities. And my grandfather was a Carlton supporter who grew up in the working-class Catholic areas of Brunswick. A generation later, when my mother was a kid, and despite the grinding poverty her family lived in, each Saturday he would take her and my uncle to the Carlton game. When you have very little, football at Princes Park was an enormous treat you’d wait all week for.

BOGAN (Wikipedia): The term bogan is Australian slang, usually pejorative or self-deprecating, for an individual who is recognised to be from a lower class background or someone whose limited education, speech, clothing, attitude and behaviour exemplifies such a background.

As I’ve written about before, the demonisation of the working class through the loathing of bogans in Australia (and of “chavs” in the UK) is accelerating.

Earlier this year Twitter was awash with the #boganmovies meme, which saw “jokes” like “TarGet Shorty”, “The Re-producers”, “XXXXorcist” and “Dude where’s my baby bonus”. These examples are generally representative of the ridicule-as-humour nature of the meme.

The #boganmovies tweet about Target clothes in particular, was an echo of the joke that begins  Owen Jones’ book Chavs: The Demonization of the Working Class about Britain:

It’s sad that Woolworth’s is closing. Where will all the chavs buy their Christmas presents?”.

As Lynsey Hanley notes in her review in The Guardian, the dinner party at which the joke was made was:

Attended by the author in ‘a gentrified part of east London’, at which liberal views are taken as a given and, though everyone present has a professional job, not everyone is white, male or straight.

As the promo for the book says:

And local book The Bogan Delusion, about the stereotyping of the working class, insightfully points out that:

There’s nothing subtle or delightful about the various meanings of the label ‘bogan’: it’s always a crass put down, and even the ‘bogan and proud’ brigade know they are wrangling a slur.

Mostly when heaping crap on Collingwood supporters it is because they are poor, and for some reason this makes people socially objectionable. For me the only reason being poor should be unacceptable is that we live in a country of enormous wealth, with a growing gap between the wealthy and the less well-off. The bagging of Collingwood is the kind of thesis that promotes a lie that we live in a meritocracy, where the spivs from Geelong somehow deserve their victory and material lifestyle along the newly redeveloped waterfront (which is of course also an unfair stereotype), whereas the bogans from Collingwood deserve their public housing and poor dentistry.

Not only does this obscure the fact that most of us (whether we like it or not) will never be sufficiently wealthy to live as comfortably as the corporate heads who run AFL clubs, including the John Elliots and Richard Pratts of Carlton, it also makes out that some people deserve poverty. That it is something natural to the order of things, rather than a system that leaves some people out in the cold.

As the US website ‘We are the 99 percent‘ shows, their poor are numerous and their suffering is real and extreme. Medical bills are a leading cause of bankruptcy, and defaults on home mortgages grow by the day. As is plainly obvious on the 99 per cent website, student loans are impossible for many to repay with many graduates unable find work. Although I accept things are more polarised between the haves and the have-nots in the US, things are getting worse here and the wealth gap is far greater than many of us estimate.

It is true the suffering of Eddie Maguire in the final quarter of the grand Final brought me a great deal Schadenfreude, perhaps only equalled by Jeff Kennett’s face after Hawthorn’s loss in the qualifying final. But that is because, mostly, they both represent the corporatisation of the AFL and the rejection of its ordinary beginnings in the communities of Melbourne. Well that and my feelings about Eddie Maguire’s narcissistic misogyny over the ‘boning’ of Jessica Rowe, and Kennett’s blatant and repeated homophobia. (As an aside, when the hell will BeyondBlue sack him for his hateful and damaging comments?)

It is not that I am saying we shouldn’t joke about class, nor that these things should be out of bounds of humour, but there is a difference between humour and hatred – and in regards to working-class people it seems, of late, it is much more about the latter. Jokes about Collingwood supporters, after all, need not entail demonisation of the working class and poor. They have their own history of collywobbles to contend with, and in that alone there is plenty of funny.

But moreover, even for a Carlton supporter, not everything about Collingwood is repellent. Far from it. They are a team that that has a loyal supporter base that should, and does, make most other teams jealous. They have also won a few flags I hear. But even more wonderful is you can read Harry O’Brien standing up for global human rights, it makes me wish for just a few more players like him at Carlton. As he says, “I have had various experiences which have profoundly shaped my world view and taught me the relevance of three things – suffering, empowerment, and unity”.

For me that unity is in those who want to see an end to poverty, and in those of us who see  no shame at all in being working class or poor.