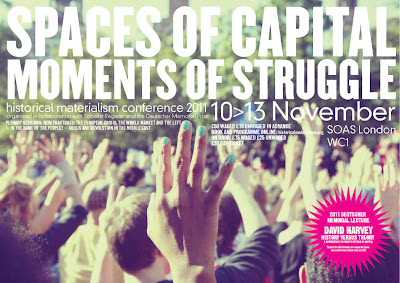 Tad and Elizabeth are both presenting conference papers at this year’s Historical Materialism conference, held in Central London later this week. UK readers can register for the conference here.

This is the abstract for Tad’s paper Beyond critical psychiatry: Towards a materialist account of mental illness:

After decades of dominance, biological psychiatry faces a crisis of legitimacy and the emergence of new critical perspectives within and outside the profession. Some have even questioned basic philosophical assumptions of psychiatric research and practice. This growing critique is particularly evident in debates over the diagnosis of depression, a condition whose prevalence and treatment has risen dramatically in the neoliberal era, and whose validity is increasingly under challenge. Yet, despite at times offering radical insights, such critiques fail to provide a thoroughgoing rethinking of the mainstream psychiatric project. A Marxist approach, drawing especially on the work of Valentin Voloshinov and Peter Sedgwick, must start by integrating four key insights to move beyond the limits of critical psychiatry’s current scope: (1) The critique of medical individualism as the basic organising principle of clinical practice, (2) the conceptualisation of emotion and cognition as emerging at the boundary between the (biological) subject and society, (3) the nature of health and illness, “mental” and “physical”, as social constructions, and (4) the indissoluble link between identification of illness and the social practice of treatment. The integration of these concepts within a materialist account of the rise of depression locates it in a dynamic, contested space at the intersection of powerful corporate and state interests, the reductive biological horizons of capitalist medicine, and the growing social distress produced by three decades of neoliberalisation — as well as growing subaltern opposition to their effects. Such an account can act as a framework for further investigations into mental health and illness in the context of projects for social transformation, as well as contributing to alternative heuristics in psychiatric research.

This is the abstract for Elizabeth’s paper Understood in their ‘originality and uniqueness’: Locating Gramsci’s organic intellectuals in the Australian Global Justice movement:

Antonio Gramsci articulated the category of ‘organic intellectuals’ to describe individuals whose role is ‘as constructor, organiser, “permanent persuader”,’ providing leadership within hegemonic projects to forge a ‘popular collective will’. Gramsci linked this construct to that of ‘The Modern Prince’, a strategic centre (or party) within subaltern hegemonic movements, bringing together organic intellectuals within a common project. While these general conceptions have been much discussed, they have less commonly been utilised in the concrete study of modern social movements. The emergence of the Global Justice Movement (GJM) in the late 1990s seems to provide a fertile context in which to examine the relevance of Gramsci’s theoretical approach, especially as the movement possessed clear anti-systemic characteristics and rapidly drew together diverse social forces around common concerns and aims (both within and across national boundaries). In the weeks after the Seattle protests of late 1999 it led Stephen Gill to proclaim the emergence of a ‘Post-Modern Prince’ which sought ‘to develop a global and universal politics of radical (re)construction’. Contra Gill, Matthew D Stephen pointed to the limitations of the GJM’s model of ‘unity in diversity’ vis-à-vis Gramsci’s problematic, noting especially Gill’s silence on the role of organic intellectuals in cohering the movement’s direction. Drawing on analysis of interviews with leading activists from the Australian GJM, this paper demonstrates the utility of Gramsci’s categories. It highlights the crystallisation of a layer of movement ‘networkers’ — akin to organic intellectuals — from within the various sectors of the movement but whose orientation was to build a wider movement transcending those sectoral divisions. It also points to the limitations of their development when the GJM fell into decline, their inability to collectively respond to the challenges faced by the movement, and ultimately the inability of the movement to produce a self-conscious ‘Modern Prince’ to take it forward. It confirms Stephen’s assessment of Gill’s premature celebration of the GJM, but also — following Gramsci — suggests the potential for a deeper development of anti-systemic movements through a conscious focus on uniting movement networkers as a central aim of building an effective strategic centre.