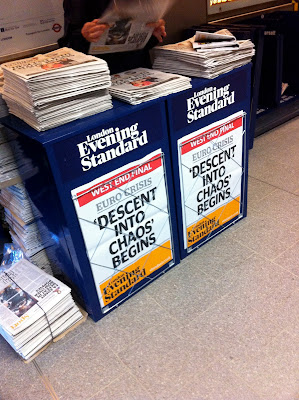 If the last week’s bizarre political contortions in Greece — first a referendum, then not, then a government of national unity, now more uncertainty — were not enough, the spread of contagion to Italy threatens even greater turmoil. As we arrived in London we were greeted by the Financial Times informing us that Silvio Berlusconi had (finally) agreed to resign as PM, but apparently in part so he could maintain a hope of running for the top job yet again in early elections.

The relief among European financial elites that once again they had imposed political change over the heads of any kind of sovereign democratic decision-making by the people of individual European nations (let’s recall that both Greece and now Italy have accepted IMF and European Central Bank mandarins to “monitor” and oversee their domestic finances), rapidly crumbled and the Evening Standard headline by late afternoon laid bare the seriousness of the situation. As one Facebook friend said, it’s Eurapocalypse Now.

Perhaps in Australia, where we’ve weathered the worst of the global crisis, the faltering authority of our political class can appear (only appear) to be a function of contingent, extra-economic factors, but in Europe there is no mistaking that it is a crisis of political economy, as top UBS economist George Magnus was at pains to point out in August, invoking a famous quote from Karl Marx’s Preface to A Contribution to the Critique of Political Economy:

At a certain stage of development, the material productive forces of society come into conflict with the existing relations of production or — this merely expresses the same thing in legal terms — with the property relations within this framework of which they have operated hitherto

For pretty much the best account of how the global economic crisis, the post-2007 unravelling of the debt-driven era of financialised capitalism that we’ve lived through (and which in Australia has been held in stasis thanks to a mixture of stimulus and resources export markets in China) as it applies to Europe, you can do no better than read the three reports by the SOAS London based Research on Money and Finance group released over the last couple of years. The third has just come out and they are downloadable here.

To briefly sum up, the problems in the Eurozone are primarily caused by the way that the construction of a new international reserve currency to compete with the US dollar has exacerbated inequalities between “core” and “peripheral” Eurozone nations. This has seen the German ruling class’ cuts to its workers’ real wages give it a massive competitive advantage over poorer capitalisms such as Greece, Ireland, Spain and Portugal (and now even Italy). That process led to Germany effectively becoming the chief creditor to the increasingly indebted periphery, and when the GFC broke these disparities came to a head, especially as private debts rapidly became sovereign debt through massive taxpayer-funded bailouts of the banks and financial system.

Thus, claims that the ordinary people of Greece and other peripheral countries have been “living beyond their means” are pure elite ideology, designed to get ordinary people to accept endless austerity in order to save a monetary project that has always been about shoring up the interests of European capital and not European workers. The current crisis also exposes how the most powerful European capitalisms (Germany and France in particular) have gained the most from the arrangement, leaving the peripheral nations trapped in an impossible debt spiral. But peripheral ruling elites feel ever more tied to the Euro the worse things get, fearing that being outside the tent will leave them more exposed to both their competitiveness problem and the anger of their own populations. At the same time, the post-2007 crisis now threatens to disrupt and possibly destroy that hierarchy, as Greece approaches default and possible Eurozone exit.

The great thing about the RMF reports, and especially the latest one, is that they are not primarily concerned about the fortunes of Greek capitalism in such a situation, but how the pressing social questions created by the crisis can be addressed. And so they should, as a recent report in the leading international medical journal The Lancet ha shown that the crisis has been a disaster for the health of ordinary Greeks, concluding, “It reminds us that, in an effort to finance debts, ordinary people are paying the ultimate price: losing access to care and preventive services, facing higher risks of HIV and sexually transmitted diseases, and in the worst cases losing their lives.” Another report in the same journal has shown a sharp rise in suicidality.

Costas Lapavitsas and his RMF co-authors argue that default and exit from the Eurozone is the best option for ordinary Greeks, but for it to truly address issues of social justice there would have to be immediate nationalisation of banks and a shift in power from capital to organised labour. They spell out the beginnings of a serious transitional program: A response to the crisis from below around which ordinary people can be mobilised. 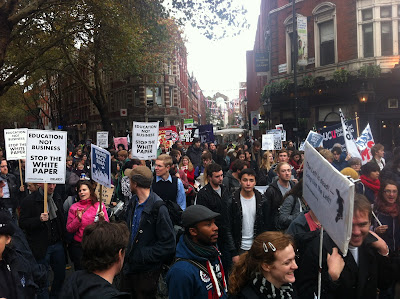 In the UK things are not quite as dire, but within hours of arriving we caught part of a 10,000-strong student protest against Con-Dem attacks on the education system. This is the first major student mobilisation of the new academic year and follows the wave of radical protests and occupations of late 2010. Since then there have also been mass union protests (including strikes) against the government’s harsh austerity program and 30 November is set to be the largest national work stoppage since the General Strike of 1926. It will involve significant strikes by health workers against cuts and privatisations within the NHS. Occupy London continues at two sites near the heart of the City of London.

The ideological ferment is considerable. A talk by Canadian political scientist David McNally — on the topic of his new book, Monsters of the Market: Zombies, Vampires and Global Capitalism — packed out a lecture room at Kings College last night. David’s arrival in the UK seems to have coincided with the gathering of clouds over the Eurozone. As someone once wrote, “It was a dark and stormy night…”