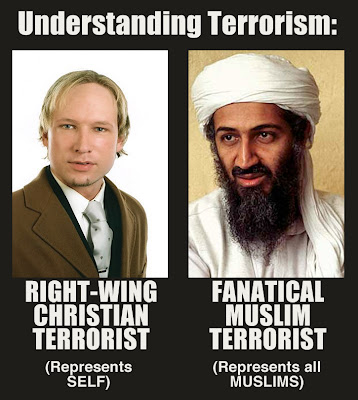 It was not entirely unexpected that two prosecution-appointed psychiatrists would find Norwegian fascist mass murderer Anders Breivik insane and unfit to stand trial, diagnosing him with Paranoid Schizophrenia. The diagnosis — so far only backed by a few, unconvincing details from their as-yet unreleased report — runs counter to the voluminous information, available in the public domain, about Breivik and his belief system, including his notorious Manifesto 2083.

I am writing an initial response for ABC’s The Drum, which will probably be online tomorrow. In the meantime, here is an essay abridged from the e-book On Utoya: Anders Breivik, right terror, racism and Europe, which originally appeared on The Drum last month. The e-book was edited by Elizabeth Humphrys, Guy Rundle and myself, published in late October, and is available for download from Amazon here.

Three months ago, when far-Right activist Anders Breivik killed more than 70 people in Norway, the world was treated to a bizarre series of turnabouts and reversals as the media struggled to interpret and frame the events.

Famously, before Breivik’s identity was known, numerous right-wing commentators leapt to the conclusion that it was a violent Islamist attack. For almost exactly 10 years, the response to such events conformed to a well-trodden path — of making a hard political case against Islamism, and usually Islam more generally. Even when the actions of terrorists were classified as ‘mad’ or understandable only with reference to the twisted individual psychologies of the perpetrators, this mental disturbance was the result of hate-filled, anti-Enlightenment doctrines learned in Madrassas, where contempt for Western values and rabid fundamentalist explications of the Koran whipped them into a frenzied, murderous state.

Then it became clear that Breivik was Norwegian, white, and had perpetrated the atrocity as a way of “waking” Europe from its sleepwalk into thorough Islamisation by “cultural Marxists”. There was a brief moment when Anders Breivik could be understood as a product of the rise of the Islamophobic Right in Europe. Yet almost as quickly the optic shifted to one of Breivik as a lone madman, because a deranged, self-obsessed and isolated individual was, of course, the only kind of person capable of such cruel and barbaric acts. Unless he had been an Islamist, that is. The media line was bolstered when Breivik’s lawyer declared that to have acted the way he had the killer must be insane, and told reporters he had demanded that Breivik undergo psychological testing. Explaining his reasoning, the social democratic lawyer said that the terrorist had “a view on reality that is very, very difficult to explain”.

Much of this shift in emphasis was the product of the same right-wing commentators who’d been eager to cry “jihad” the moment the events had hit the news wires. Yet they would not have been able to succeed in turning the discussion if there was not a great deal of general confusion about the whole notion of madness, and a cultural tendency to use it as a grab bag to explain any form of extreme or violent behaviour — particularly in an era when political movements and violence other than Islamism have become close to invisible. Discussion of Breivik and his crimes demonstrated how confused the public sphere was about the nature of politics, sanity and evil — and the uses to which such confusion could be put.

Thus pundits and commentators from a wide range of political viewpoints came to bury Breivik’s act in the realm of psychopathology, to see only the monstrous form and deny rationality (however unpalatable) to its content. In the Sydney Morning Herald, Peter Hartcher, sought to dismiss conflation of “the incident with the rise of far-right parties in Europe”.

Andrew Bolt, after initially blaming the attack on Islamists, then protested at alleged “gloating attempts to blame the horrific murder of 93 Norwegians [on] any interest group or cause that murderer Anders Behring Breivik touched,” including his Christianity. Instead he blamed Breivik’s relationship with his father.

Nor was it merely journalists and pundits who rushed in to declare Breivik’s psychopathology. With the victims’ bodies still being recovered, self-proclaimed psychological experts were analysing the killer’s motivations with barely a shred of substantiation to work from.

Wasn’t really about ideology or religion at all. That’s just the window dressing. It was all about him. Breivic [sic]. And his deep-seated feelings of inadequacy in relation to the opposite sex.

Others drew on the controversial argument put by Harvard psychiatrist Alvin Poussaint that extreme racism was a form of psychosis known as Delusional Disorder.  Forensic psychologist Dr Michael Nuccitelli preferred Narcissistic Personality Disorder because he “planned and premeditated his expected infamy” — a tenuous link to a complex and frequently disputed diagnosis. Even London Mayor Boris Johnson weighed in, calling Breivik “patently mad” and predicting that “we can expect exhaustive psychoanalysis of this dreary and supercilious 32-year-old sicko”, even as he performed such.

The evidence for it was practically non-existent, but already the psychological-psychiatric narrative was taking shape. This was especially so because the Norwegian mass killings created a serious problem for the Right in both its mainstream and less acceptable forms. Here was a situation where its more or less open incitements to civilisational clashes were being turned into deeds in a cold, clinical, premeditated manner by an enthusiastic supporter. Desperate to hang on to their ideological positions, to be able to draw an improbable dividing line between ideas and actions, they resorted to a psychological rather than political argument.

The fact that Breivik praised and quoted verbatim the work of leading figures of the conservative Right in the United States led many of them to develop an “insanity defence” of their own. Pamela Geller, whose blog Atlas Shrugs is mentioned in the Manifesto, and which has been a focal point of opposition to the proposed Islamic centre in lower Manhattan, quickly denied culpability: “This guy was nuts … He co-opted the work, he stole the narrative, to substantiate his insane, violent plans”.

Author Robert Spencer, creator of Jihad Watch and co-founder of the group Stop The Islamization [sic] of America, repudiated any responsibility for Breivik’s actions in part by arguing, “This kind of thing is going to happen. You can’t account for psychopaths, and so I’m not going to be deterred.”

And the UK Daily Mail’s notorious Melanie Phillips was incandescent that anyone would associate the massacre with “decent people who are boiling with rage at being disenfranchised by an entire political class”. Breivik was simply “ in the grip of a psychosis”.

Psychosis, narcissism and the murderous mind

The notion that Breivik’s actions “did not bear examination” was a use, and usually a far-from-consistent one, of the two ideas of mental disturbance most frequently employed in the law — psychosis and personality disorder. Thus some people suffering psychosis can make the defence that they were so disconnected from reality that even though they understand the act is wrong and hurtful they believe other factors make it unavoidable (e.g. a mother with a psychotic depression drowns her children because she believes they are suffering because of her inability to parent them, and that the only way to relieve their torment is by going to heaven).

The discovery that Breivik’s Manifesto 2083 was easily downloadable from the internet shifted the focus away from the crudest generalisations, chiefly because of the document’s generally coherent structure and arguments. Much of it was lifted directly from right-wing websites and articles, many of them well known. Unlike Jared Lee Loughner, who shot an Arizona Democratic congresswoman in January 2011 while obsessed with government conspiracies as part of a psychotic illness, Breivik’s “madness” could not be parcelled off in the same way. Simply put, serious psychosis makes the kind of compiling and editing that Breivik did very difficult in the absence of effective treatment.

This brings us to the second kind of mental disorder that can be invoked to explain aberrant acts of violence: The category of “personality disorders”. These are a historically much more recent psychiatric construct, rising to prominence with the 1980 third edition of the Diagnostic and Statistical Manual of Mental Disorders (DSM-III), widely recognised as the “bible” of modern psychiatric diagnosis. Yet, as the DSM’s authors are at pains to point out, there is no coherent theoretical framework behind these diagnostic categories, based as they are on clusters of maladaptive and socially unacceptable behaviours (rather than causative mechanisms). Research into these diagnoses has been plagued with questions over the arbitrary criteria that determine whether certain personality styles and problems of living get to be called “disorders”, as well as evidence that there is massive overlap between the categories that robs them of specificity.

Diagnoses like Narcissistic, Antisocial, Paranoid and Schizoid Personality Disorder also bear the marks of their social construction. One person’s successful, driven, confident political leader is another’s misanthropic, self-obsessed, destructive narcissist. One only needs think of how Australian political journalists lauded Kevin Rudd’s ruthless and single-minded capture of the Parliamentary Labor Party for his own agenda, but then retailed stories about his unsuitable personality when his prime ministership started to come under pressure politically. Yet no serious commentator would suggest that Rudd’s trajectory can only be understood in total separation from the Labor Party’s. Such an idea comes mainly from apologists for the party who want to lay the blame for the failure of its collective project on a wayward individual.

Significantly, personality disorders do not represent a complete break from reality. They do not normally represent a defence in the sense of “not guilty, mentally ill”. They are not, in our society, considered to excuse people of their culpability in criminal acts. Moreover, people who meet the criteria for such disorders hold widely divergent social and political views: From the banal mainstream to the extremes of Left and Right. There is no straight line from personality disorder to violent political mass murderer, any more than there is from personality disorder to ruthless entrepreneur.

But, of course, when an apparently singular and unthinkable horror occurs, that won’t stop attempts to reduce it to such categories, however crudely. The psychologisation of Breivik’s atrocities serves a function in settling fears, in isolating “extremists” as “lone gunmen” divorced from wider political developments, to paint a picture of a healthy political current whose only internal threats are aberrations. In this way it is a clear case of depoliticisation.

But it is also the reinstatement and intensification of the Right’s preferred political strategy for keeping the nation united by identifying the causes of social polarisation and instability in external threats; threats to nation, to culture, to resources, to cohesion. In such a configuration a mass political assassination can occur, yet within days the old threats from outside are re-emphasised because our internal problems are mere aberrations and outliers, of no greater meaning. Even if they shy from accepting Breivik’s most extreme conclusions, by calling him insane they seek to continue the same project by other means. It demonstrates above all that we need to get away from notions that any event which strikes us as brutal, sadistic or inexplicable should be dismissed as “mad” — and above all that we have to go beyond individual psychology if we are to understand the events that have most impact on us.