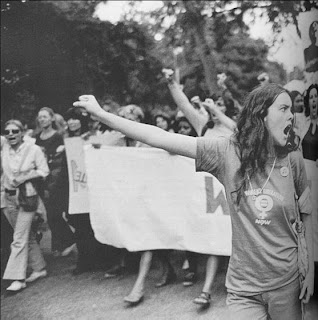 Here is a link to my article on feminism, published yesterday at the ABC’s The Drum website.

I don’t call myself a feminist. But some of my best friends are feminists.

Some women don’t like the descriptor, and reject it because they don’t want to be associated with a certain stereotype. Or because they believe in countries like Australia there is gender equality now. Neither of these reasons is why I shy away from the label.

I originally abandoned the tag because I don’t agree with what is called patriarchy theory, with which feminism has been inexorably associated (especially inside the academy and social movements). Although that is in many ways an abstract debate, and I tended not to correct people who saw me as under the feminist umbrella.

More recently I have become irritated with the term, because ‘feminist’ increasingly has little specificity. As Nina Power argues in One Dimensional Woman, the term ‘feminist’ (and indeed the wider feminist project) has been stripped of much of its sharpness and liberatory potential.

I tend to say that I fight for women’s liberation. In the past calling yourself a feminist – or in the case of men who called themselves feminist allies or supporters – meant being part of a political and social movement fighting for gender emancipation. But the label has shed that meaning, with rapid growth along two axes.

On the one hand a more diverse group of women than ever before call themselves ‘feminist’, which is a problem only when those growing ranks are women like Sarah Palin. Or indeed if Sex in The City II is the result, where supposedly even those who wear a burka long for the choices of the so called ‘liberated’ woman – the choice to wear expensive designer clothes and many sequins, as the final sequences of the movie explain to us (those being sequins draped over a size six outfit, hairless torso and legs, plucked eyebrows, pedicured feet, liposuctioned butt, and a fake tan).

Palin is clearly not down with the sequins and consumerism as feminism, as much as the firearms as feminism subgenre; her style is more uber-feminist and is leading the way in what is known as the ‘new conservative feminism’. For the likes of Camille Paglia and others she:

I’ve always adored Paglia’s colour. Not. Not really at all. Although she highlights something important here – taking up the word feminist is now the rejection of the ‘feminist establishment’. This is code for a rejection of those who demand real deliverance on the question of equality and choice, and not the kind of liberty you find in a supermarket stocked with five different types of the same shade of lipstick (even if all made from organic components).

On the other hand it is no longer bizarre for men to call themselves feminists – as opposed to allies or supporters of the feminist movement. And while this is not troubling in the same manner as Palin, it seems often to say no more than, ‘In my view I’m not a sexist prick’. Which most aren’t. But the term still contains very little of its original meaning – very little that is about women’s emancipation as a political project and this is, in my view, a disservice to those men who actively support and act in the struggle for women’s equality.

In the end the debate about who does and doesn’t call themselves a feminist is less important than recognising the sanitising of feminism since the end of the women’s liberation movement of the 1970s. The rise of the ‘new conservative feminism’ of Palin and her ilk is problematic, but so too is the depressing individualism of many on the so-called progressive side of politics – those who argue that any view on what real liberation is can be as valid as any other, as it simply allows women’s voices to be heard. This posits that all women have the same beliefs, interests and agendas. Suggesting that all women have views that are equally sufficient to meet the aim of ending gender inequality abandons the political struggle over how that is best achieved.

It is as problematic as a feminism that takes gender out of its time and location – that fails to recognise how being a woman inhabits the same space as the colour of a woman’s skin, what country she lives in, what religion she is, and what socio-economic background she is from.

For example, while it is clearly a problem that the Institute of Public Affairs has no women on its board of 12 (white?) men, and only four of its 20 listed staff are women. (I say ‘listed’ as I don’t expect their researchers and public cajolers, whose photos adorn the website, are answering the switchboard or cleaning the toilets – jobs that are paid less and more likely done by women and those whose first language was not English.) The bigger problem is that the IPA are the highest profile lobby group for orthodox neoclassical economic reform in Australia. They are a group deeply committed to more laissez-faire economic policy, not less, more market control over public services, not less, and less of a social wage, not more. All policies that have seen the feminisation of inequality locally and globally and contributed to the growing gap between men’s and women’s wages in Australia in recent times.

But despite the negative impact of what they proselytise for, it is also an organisation where at least one of their female staff publicly calls herself a ‘feminist’. Another female staff memberwrites about the Wisconsin public sector protests as an example of the dilemma of ‘how to rein in rampant public sector unions’ – those being unions opposed to austerity measures and public sector cuts that would impact significantly on teachers and nurses, who are predominantly women, not to mention other low paid public sector workers.

In the end the argument about who calls herself or himself a feminist, and who doesn’t, is secondary. I want to know who is up for a fight for real emancipation from gender discrimination. Who will argue for social and economic policy that does good for women, not the exact opposite?

And on that question I can say that not only are many of my best friends feminists, but they are of the very finest kind.