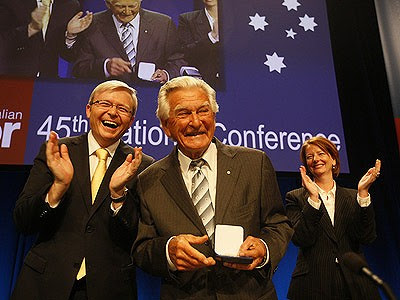 My latest piece for ABC’s The Drum was published yesterday. Here is the original text for your reading pleasure. Comments most welcome, and I will try to respond.

A flurry of excitement gripped federal politics in the last fortnight — from Kevin Rudd’s failed challenge for the Labor leadership to the parachuting of Bob Carr into the foreign ministry. Without doubt it represented a brief sharpening of the difficulties faced by the Gillard government. But it also highlighted much bigger and more longstanding problems for the social democratic politics the ALP articulates, troubles that cannot be swept away with facile claims like those that Carr’s foray into Canberra represents an “utterly transformative” moment.

The ALP is in the middle of an unprecedented rut that has much deeper roots than any leadership stoush or lousy decision by a “faceless men”. For anyone not mesmerised by the mood swings of the 24-hour news cycle, the future for Labor looks dark indeed. The party’s conundrum represents a crisis of the Laborist project for which there is no ready solution. Even if the ALP can temporarily rise in the polls, the material conditions for it to recover its former glory simply cannot be recreated.

It is worth examining the dimensions of the ALP’s problems in a little detail to understand the magnitude of what is happening.

On the morning Bob Carr was inserted into federal politics the Australian Financial Review published an essay of his spelling out the depth of problems facing social democratic parties in Australia and internationally. Anyone looking for insights into the causes of Labor’s problems or possible solutions would have been struck at how Carr comes up empty handed. He concludes that “for the first time in the history of socialism, theory offers no guide,” and suggests the best that Labor leaders can do is “improvise and experiment”. Profound stuff.

In reality, Carr simply retreads the strategy that has dominated Labor politics since the early 1980s, the pro-business market liberalism of the Hawke and Keating years. It’s the same “reform” mantra repeatedly dredged up by commentators across the spectrum, who decry the fact that the sacrifices demanded of Australian workers to restore the health of the corporate sector are no longer being openly pursued by the political class. Yet if one wants to look at Labor’s secular decline, then it most closely matches this heroic period of “reform”.

This should not come as a surprise. Through the Accord and its successors, Hawke and Keating delivered a historic victory to big business at the expense of the ALP’s traditional working class supporters: An across-the-board cut in real wages in the late 1980s (something Thatcher never achieved in the UK), painful restructuring sped up by the “recession we had to have”, and the weakening and fragmentation of union organisation through waves of enterprise bargaining and productivity trade-offs. Industrial relations academic David Peetz has identified the main causes of union decline as changes to industrial laws, increased market competition leading to more aggressive employer tactics, rising inequality, and labour market changes caused by economic restructuring — all processes driven by ALP policies and continued by the conservatives. If the key purpose of the ALP’s union base in this period was to deliver on the demands of Australian business, it also had the effect of undermining the unions’ ability to keep carrying out that function.

It was this combination of factors that underpinned Labor’s crushing 1996 defeat and 11 years in the wilderness. Labor then also moved to the Right on a series of social issues, buying the myth that it had to surrender to conservatives’ use of nationalism and social conservatism to win back the “Howard Battlers”. Perhaps nobody should’ve been surprised given the party’s historic support for White Australia and countless Australian military adventures. Nevertheless, Labor’s acquiescence to Howard on asylum seekers and the War on Terror hit hard among a section of its core supporters, who switched to the Greens in disgust. Finally, the party embraced the ideological trappings of “neoliberalism”, with its reduction of politics to a kind of technocratic managerialism. ALP leaders’ ideas are now so far from the party’s historic program that its MPs lambast Tony Abbott for not being pro-market/pro-business enough over climate change or paid parental leave.

If the definition of insanity is “doing the same thing over and over again and expecting different results”, then Labor’s crisis is unlikely to be solved by repeating what has brought it to this sorry point. Those who imagine that people like Carr represent a way forward should recall that his mix of economic rationalism, racially-charged law and order policies, and use of “overpopulation” arguments to evade scrutiny of crumbling infrastructure ended with him resigning as NSW Premier before the voters could get to him. They should also remember his subsequent consultancy to the super-rich at Macquarie Bank and his activities as a political lobbyist for business.

Such piecemeal hollowing out of official politics can continue for some time while the Australian economy avoids the worst of the global crisis. Similar processes were also at play in social democratic parties around the world before the GFC. But where centre-Left parties have driven austerity they have seen their support collapse even more spectacularly — perhaps nowhere more so than Greece where the recently ruling PASOK party is languishing at around 8 percent in the polls and radical Left parties are together garnering support of around 42 percent. Committed to the aggressively pro-business, Thatcherite agenda adopted by most mainstream parties after the recessions of the 1970s, modern social democracy no longer has either the social weight or political program to navigate its way out of a worsening global social crisis. Even when social democratic politicians play at Left rhetoric they sound unconvincing and have no strategy to deliver on their bluster, even if not all are as ham-fisted as Wayne Swan.

A European social democrat in the early twentieth century once said that the job of social democracy was to be the doctor who saved capitalism when the system was sick. The modern ALP has spent so long playing such a role that its own condition is starting to look suspiciously incurable.