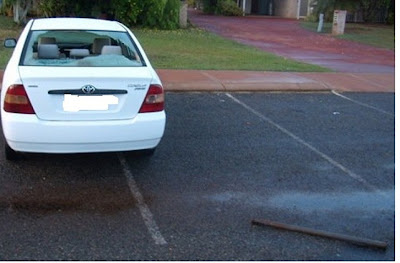 This morning on our way to the city my husband told me how his cousin’s car had been smashed up and he’d been left a note — “go back to your own country terrorist”.

H lives and works in a remote mining town in Western Australia. He moved to Australia nearly 2 years ago after completing his MBA at an Australian university’s Malaysian campus. Like many from the Middle East his undergraduate qualifications are in Petroleum Engineering. H struggled to find a job in Sydney and when offered the position in WA took the opportunity gladly. Bet he’s probably regretting that about now…

He’s had a few minor problems adjusting to living there, but nothing out of the ordinary. After all he’s a single, young man who’s lived most of his life in capital or international cities, but is now located in Australia’s own Wild West — tiny, single industry towns full of men. The boredom and loneliness is intense, but was somewhat mediated by moving into a share house with two other young men and the purchase of his car. With this move he had someone to talk to and the possibility of escaping at the weekends.

He’s never felt particularly welcomed by his workmates however. There has been the occasional comment and a generally unfriendly attitude, but for me to know about this it must have been quite difficult, because H is nothing if not proud. He’s so proud I find him insufferably arrogant, and we no longer speak after I got so sick of his patronising attitude that I unfriended him on Facebook. Nevertheless, the thought of this young, hopeful, intelligent, well-educated immigrant encountering the very worst of white Australian attitudes on a daily basis makes my heart bleed. The deep irony being that both my husband and H have left their country precisely to escape the kind of religious fundamentalism that results in terrorism, only to be stereotyped as the embodiment of.

So on an ordinary Monday, H drives to work, parks in the company car park and comes out after his shift to find one or more of his workmates have smashed his back window and left a typed noted telling him that he now faces a new breed of terror — Australian-style workplace bullying. He calls the police who, surprise, surprise, are not “able” to do anything. Apparently because of rain and becausethe note is typed there are no fingerprints. The cynics amongst us think the police probably don’t care that much, thought it was funny or agreed with the bullies. This is especially so given a political climate where the Prime Minister and Opposition Leader are whipping up racist hysteria against H’s countrymen in order to appeal to the lowest common denominator in the electorate. Thanks for that Julia, my feminist sister and all. The refugee-bashing rhetoric actually has concrete effects, not that they will ever see them.

So what does the future hold for H? His brother-in-law advised him he should respond by trying to impress his workmates with his diligence — come to work early, be the last to leave at night. Does this strike anyone else as a typical immigrant reaction that is unlikely to endear H to his Australian counterparts? Rather than this being taken as a gesture of trying to show his willingness to work hard to learn the ropes, I fear it would be perceived as an attempt to brown-nose the boss or show up the other staff. His boss is a fellow Iranian who tells him to keep his head down and ignore it —– an attitude undoubtedly shaped by his many years in the trenches. On the other hand, hubby and I want him to get out — just start applying for jobs now, on the basis that his work experience will make him more employable than previously. He could head back to the big smoke, where, if our PM is to be believed, such attitudes run rampant, especially in her Western suburbs electorate. While this may or may not be true, at least there’s safety in numbers. Rather than being one of two Iranians in town, he’ll be one of 3,000 in Melbourne or one of 11,000 in Sydney.

As for H, he says his workmates seem ashamed and have been “nicer” to him since it happened. But he also adds, “I hope they won’t turn me into soap”.