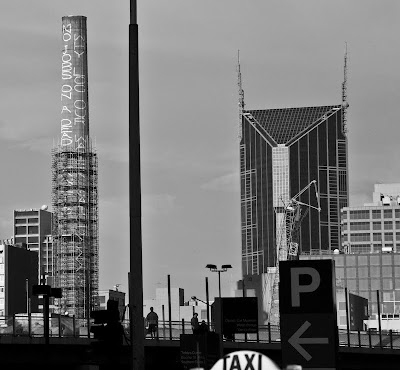 In recent weeks many political commentators have argued that what is missing in the current, dispiriting campaign is a serious debate on economic policy. But it is hard to see what real debate can be had given that both major parties share a near-identical obeisance to neoliberal orthodoxy: low taxes, balanced Budgets with an aversion to deficit spending, cutting business red-tape, limiting trade union rights and leaving real economic decisions to the “free market”. Lest there be any concern that Gillard was following Rudd in pronouncing the death of neoliberalism and predicting a new era of social democratic ascendancy, her National Press Club speech just before calling the election put paid to that. As one perceptive commentator has put it, any differentiation between the two parties is illusory:

There is no real alternative of economic policy. Rather one is hiding behind the stability of the Howard years three years ago, the other the recession that was avoided last year. Take your pick on the past you prefer.

This, then, is where the Greens come in, spruiking a “transformative” new politics and an economics that supposedly breaks from the numbing orthodoxy of the mainstream. The current political vacuum has meant that their policies are analysed with a seriousness not previously afforded them.

I will refrain from dredging through the detail of Greens economic policies in order to highlight some of the key philosophical issues, including those touted by party leaders but not embodied in their policy documents (which can be found here, under “sustainable economy”). In part I take this approach because these documents are often messy compromises taken at past National Policy Conferences, and therefore lack the coherence that a single-author policy statement might have. If there’s a strength about the Greens’ internal culture it is that there has been genuine space for disagreement within their consensus decision-making structures.

But messiness and contradictory statements also reflect real internal divisions on economics—ones that cannot be explained by simple recourse to electoral pragmatism (such as Bob Brown’s recent populist calls for a cut in the corporate tax rate to 28 percent “to help small business” when the party’s policy is actually to increase that rate to 33 percent).

The best way to summarise the contradictions is with these two statements:

In this and following posts I will survey these contradictions. Whatever criticism I may make of the Greens approach to economics, I certainly don’t subscribe to the idea that the party’s policies are somehow untenable compared with those of the major parties. By and large they are a mix of mainstream and Left social democratic policies under the umbrella of an ecological focus. It is no wonder that mainstream commentators have accepted them as a legitimate part of the discourse.

As I argued in Overland Journal, at the centre of Australian Greens political philosophy is a scathing critique of the degradation of the ecology by human actions, sitting alongside a much less convincing analysis of why human society is like this. It is the limitations of this explanatory framework that create the tension between different approaches to economic questions, under a shared commitment to putting nature first.

For the Greens, social critique is often posed in ethical rather than structural terms, and this resort to “values” underpins much of the way that Greens thinkers see political change. It is also a critique that appeals to a universally shared interest—that the whole of humankind has a direct stake in saving the ecology—rather than what it sees as outdated Leftist notions of differential class interest. In essence, the Greens have a clear analysis of society’s poisoned relationship with nature, but society itself tends to be something of a black box. There is little sense of a systemic understanding of society, except when it is framed in the negative: a rejection of traditional Marxist or social democratic approaches.

This is not to say that Greens views aren’t animated by outrage at social injustice, inequality and concentration of economic power. Bob Brown, hardly on the Left of the party, gave his staffers copies of Hervé Kempf’s How the Rich Are Destroying the Earth to read, which includes a withering critique of the privileged classes and which clearly links social and environmental problems. But Kempf’s book, which draws on Thorstein Veblen’s The Theory of the Leisure Class, is essentially about how the consumption habits of the rich are the main driver of environmental catastrophe, and that these consumption habits are created by a human nature which also drives ordinary people to attempt to emulate them. It is only a small step from Kempf’s argument that the rich should subordinate their behaviour to the needs of nature, to the apparently more radical calls for a new Greens ethics. Both are essentially liberal approaches, focusing on the choices of atomised individuals as the basis for economic processes. In both cases, the cry is for the rich to reform themselves (something Al Gore has been trying to do, quite unsuccessfully, with members of his own elite). At least for the Greens this goes beyond moral persuasion and is focused on effecting political change to make it happen, but the logic is the same.

Even for Greens who have a more traditional Left approach to social analysis, the key remains the prioritisation of ecological concerns. It is argued that whatever we think of any social system, like capitalism, it cannot survive environmental Armageddon, and so the key is to put the natural world at the heart of economics. As the slogan goes, “There are no jobs on a dead planet”.

At an abstract level it is hard to argue against this notion. Yet the problem of social change in the here-and-now doesn’t always conform to such a worst-case scenario, even if many Greens are driven by a view that the final catastrophe is so close that the task is to bring people to their senses before it’s too late. This telescoping of the ecological crisis, most apparent when climate change is discussed, leads to impatient dismissal of social analysis in favour of the moral case for doing something right now (perhaps best exemplified by one-time candidate Clive Hamilton‘s latest book).

The question then becomes focused on what it is about the black box of the economy that upsets the ecology. The answer is that it is the growth of consumption of natural resources that is the problem. In other words, the modern drive towards maximising economic growth is what must be tackled head on to repair the balance.