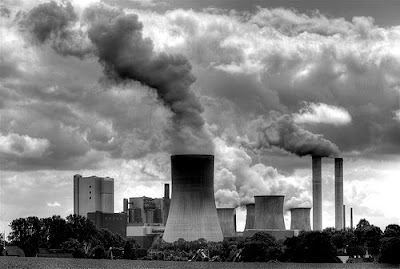 If we are indeed going to witness the return of the state, and enhanced need for security and resources that only a government can provide, then we should be paying greater attention to the things that states can do.
—Tony Judt, Ill Fares The Land, 2010, p198

Australia must tackle climate change and that reducing carbon
pollution by 2020 will require a price on carbon.
—From text of ALP-Greens agreement, 1 September 2010

Yesterday Lord Nicholas Stern, the UK’s guru of climate economics, was speaking at the National Press Club, and the line he was pushing was hard to discern from that of the just-formalised Labor-Greens agreement. Brimming with enthusiasm for action despite the setback at Copenhagen, he focused on the need to maintain the fight for carbon pricing and spoke of governments needing to involve private capital more deeply in what he termed “the Industrial Revolution of our century”.

Since Kevin Rudd suicidally dropped his pledge to introduce an emissions trading scheme, many commentators have remarked that the only party still committed to market mechanisms for climate action is the Greens. Even the Rudd and Wong’s climate advisor Ross Garnaut, hardly a sympathiser, endorsed the Greens’ strategy. While this has garnered the party respectability, it also makes clearer a fundamental tension in its economic approach, which I summarised as:

The Greens are divided about how much they want the logic of markets (and capitalism) overridden by democratic social control in the interests of the environment and social justice.

It was this ambivalence about markets that led sympathetic left-wing economist Bill Mitchell to proclaim, “Neoliberals invade the Greens” last year. Mitchell pointed to how acceptance of neoliberal ideas around financing of state investment and balanced budgets sits uneasily alongside progressive industrial relations and social justice policies. I would argue that the problem runs deeper, reflecting the surrender of much of the Left to economic rationalism after the retreat of the workers’ and other progressive movements in the late 1970s and early 1980s, a topic I will return to in my next post.

The dangerous obsession with cap & trade

But you can see how this works on climate change. As the global elite consensus firmed more and more on cap & trade, with the absence of an alternative model from inside environmental NGOs, the pressure increased for the Greens to fall in line with mainstream opinion. In 2007 Christine Milne suddenly released a report, Re-Energising Australia, which endorsed cap & trade uncritically, despite the fact the party had never seriously debated the issue. There was no evidence base to support the shift (there still isn’t!) and the argument relied mainly on reiterating idealised projections of how markets should work if neoclassical theory held true. But this also represented a political move to locate the Greens “inside” the elite debate, in part driven by a sense of desperation that some action must happen as soon as possible. Yet has being inside the mainstream debate strengthened the possibility of the kind of action we need?

When Stern called climate change “the greatest and widest-ranging market failure ever seen” it was not to argue for non-market solutions. Rather he sought an adaptation of markets to the service of climate action. The approach of “designing markets correctly” is very odd in that virtually no markets have ever been “designed”, but have grown out of the competitive relations between capitals. Given that carbon-based energy production and use is at the heart of the global capitalist economy (and a historical product of its market mechanisms), it is hard to imagine how state-manipulated “price signals” can be powerful enough to overcome deeply entrenched interests.

The notion fits, however, with the dominant neoclassical mantra that rational, self-interested and atomised economic actors can produce socially or environmentally beneficial outcomes. Such a claim is hard to sustain in the face of the historical record, but even more so after the worst economic crisis since the Great Depression ripped through the world economy. That this was a crisis initiated in complex derivatives markets didn’t seem to cool the ardour of some for the creation of similar markets in carbon credits. The abject failure of the European ETS should have served as a lesson about going down this path, but the weakness of cap & trade in terms of susceptibility to powerful economic interests was also its strength in terms of saleability to the corporate sector.

Capitalism is very poor at “internalising externalities” precisely because its measure of value is not related to social and/or ecological good. Imposing a price signal can easily provoke a “relatively inelastic” response — other factors may make the impact of such a change at best marginal. This was demonstrated when the dramatic increase in oil prices in 2007-8 had a much smaller effect on petroleum consumption, simply because fossil fuels are so essential to the operation of wide and varied parts of the world economy. If the Greens’ current proposal for a carbon price is expected to produce a 2 percent cut in emissions, it is difficult to imagine how high prices will have to be driven up to cut emissions anywhere near the 90 percent Australia needs to achieve to contribute proportionately to effective global action.

The response usually raised is that high carbon prices will make renewable industries competitive and so drive innovation and investment there. Theoretically it sounds nice but just because competitive advantage exists, there is no guarantee that investment will occur, and especially not on the scale needed to address the problem. Major infrastructure is rarely driven entirely by the private sector, and the seven solar-thermal plants we’d need in NSW to make coal-fired power generation obsolete are not likely to be taken on as projects by private capital. Even PPPs can be risky, as simple toll tunnels have proven in recent years! Yet the Greens, influenced by the wishes of the local renewables industry, have refrained from serious talk of state intervention to drive change and see government action very much in terms of massaging markets and creating relatively peripheral regulatory frameworks.

It’s not the science, stupid!

The weakness in progressive climate policy in this country is that it cannot articulate a truly alternative politics to that of the failed mainstream, despite having “the science” on its side. This stands in contrast with efforts elsewhere to fuse a social program with climate action. So, one look at the inspiring Beyond Zero Emissions report, Zero Carbon Australia Stationary Energy Plan, exposes a complete void when it comes to what actors and interests will drive change. In one sense it is trying to be apolitical so as not to narrow its appeal (and its message that real action is achievable is welcome) but the lack of a political strategy can easily lead to despair that change will happen. “The science” cannot tell us whether we rely on the state or the private sector, whether capitalism is friend or foe, or what the balance of pro and anti action forces is and how to deal with them. The Greens, by being locked into an elite ideological approach, could create the same kinds of problems if they get their “price on carbon”. If it doesn’t work (or more likely has marginal effect), the bigger task may still seem as insurmountable as ever. It’s not a reason to reject a carbon tax, but it is a reason not to oversell its significance.

Australia’s escape (to date) from the global crisis has allowed neoliberal ideas to maintain their grip on the public debate longer than in many other countries. It has also meant that sections of the Left, in particular the Greens, have not had to seriously reappraise received wisdom on big questions like market versus state, private versus public, and economic versus social. Even when they supported the Rudd stimulus, the Greens did so from a position of relatively uninformed political pragmatism. As one Greens member, now an MP, said during an impassioned debate on cap & trade at a national party meeting in early 2009: it would be a tragedy if state intervention saved the financial system, only to find it was not allowed to be used to save the planet.

In the concluding post: Why progressive politics defers to regressive economics