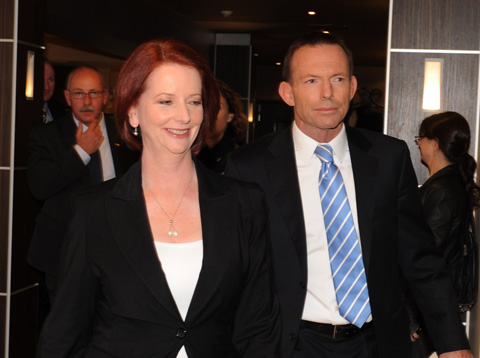 That new paradigm thingy didn’t last long, now, did it?

At least not the world of “kinder, gentler” politics that Tony Abbott was promising. Nor the ability of rural Independent MPs to rise above the fray of deal-making and remain untainted by “old-style” party politics. Nor, of course, the dream of politicians finding more “consensus” rather than squabbling along partisan lines.

Yet there is a paradigm — one of growing social and political polarisation — that is playing itself out in a new way because of the election result, now unable to be hidden behind a mask of apparent governmental stability.

As Left Flank has argued before, the result represented something quite different to the outcome the political class has been desperately trying to deliver in the five weeks since. The voters effectively rejected handing power to either major party or the political class they represent, but for reasons quite different to those articulated by most commentators since 21 August.

With the writs returned, we can look at final AEC figures. From these, some very important facts about the election need to be stressed.

The first was that despite the 2PP vote finalised fractionally in their favour, the ALP had a disastrous election. From stratospheric polling as recently as late last year, they managed to see their primary vote crash from 43.4 to just 38.0 percent, a whisker higher than in the supposedly shattering Latham election. In raw figures they lost almost 677,000 votes, despite evidence that they benefited from a sophomore swing for their MPs newly elected in 2007. There was a primary swing away from the ALP in every state and territory bar Tasmania. It is no wonder that despite her apparently unparalleled negotiating skills in cobbling together a majority in the House, Gillard has not been able to assert authority as PM. The imbroglio over the Speaker and Deputy Speaker posts only reveals her inability to turn numerical advantage into political advantage.

The second main result is that Abbott has gotten the Coalition exactly not very far at all. It was a collapse of the ALP’s voter base and not a surge to the Liberals that delivered the hung parliament. Not only did the Coalition suffer percentage swings against them in Victoria, SA and Tasmania, the 1.5 percent national swing also hides a raw increase in votes of just 134,500.

To understand this last number it is necessary to turn to the third result, which is the high number of informal votes coupled with a low voter turnout. A legal compulsion to vote may partially hide growing voter alienation from the political system, but it cannot mask it completely. Tim Colebatch has delineated the trends well, pointing to the biggest collapses in voting and valid voting in traditional working class Labor electorates. Indeed, when one looks at all enrolled voters, only 71.5 percent voted for either Labor or the Coalition.

It is in this context — of weak major parties lacking any clear mandate — that we can understand the inability of either side to gain traction in the current circumstances. It also underlines that the Independents’ power is a negative one (whatever the reasons for their local success), that they have influence because of the weakness of the majors, not their own strength.

The one clearly positive result has been the higher Greens vote, up by almost half a million from 2007. While a section of this has undoubtedly also been the result of a “protest”, longer-term polling suggests that this is not as “soft” as many pundits want to claim. By articulating the closest thing Australia has seen to a social democratic program in decades, they were able to capture a larger section of Labor’s former left-wing constituency.

There are weaknesses in the Greens’ position. Their penetration of the white-collar working class and middle-class professional Labor vote is much more advanced than their ability to relate to working class voters, like those in Western Sydney, who have been abandoning Labor in droves. But Adam Bandt’s stunning demolition of a heavily union-backed left-wing ALP candidate in Melbourne speaks the symbolic importance of the result and a potential direction for the party.

There is another danger for the Greens: that they seek to rebuild political stability rather than use it to forge a new politics. Already the release of Treasury’s Red and Blue Books of economic policy priorities indicates that there will be pressure on the Government to slash public spending in line with international elite enthusiasm for savage austerity to overcome the global recession. It is in this context that we must see sudden big polluter enthusiasm for carbon pricing, as a part of a Treasury-recommended suite of measures to push reform to increase Australian capital’s advantage in a period of heightened international competition. The Greens’ enthusiasm for Marius Kloppers’ intrusion into the debate may seem like superficially good politics, but given how the BHP boss wants massive exemptions and givebacks to industry, it is hard to see what is worth agreeing with in his proposition, yet the Greens’ lack of an alternative economic critique leaves them open to falling in behind pro-elite climate action.

Despite the weakness of the current government, what is clear is that Australia’s ruling class will expect it to drive further neoliberal policies in their advantage. Such policies have already provoked significant resistance outside parliament in recent years, especially mass union campaigns against privatisation in NSW and Queensland. While the fightback has not reached the levels of confidence or militancy that marked working class politics in the 1960s and 70s, it has been much more widely supported across the whole population. The ALP has been the main victim of this in the first place, with both those state governments likely to be hammered when they face elections.

But there is a more important decomposition taking place — that of the ALP’s eroding base inside the trade unions. The Queensland Nurses Union, a staunch supporter of Anna Bligh despite its opposition to her privatisation agenda, has apparently decided to disaffiliate from the ALP (here, paywalled). This is a decision of a negative kind, a protest against Labor’s failure to represent its traditional constituency. But it also opens the question of how to resolve the crisis of political representation, one that has been answered (at least in a partial and ambiguous way) by union backing for Adam Bandt in Melbourne. It is a continuation of this discussion — not in parliament but throughout society — that presents the hope for forging a genuinely new paradigm out of the current crisis.