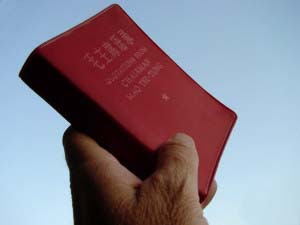 On holiday last week I read the latest book by French philosopher Alain Badiou available in English, The Communist Hypothesis. Fittingly for the former Maoist, his book was smaller than your average paperback, bound in a red cloth cover and embossed with a gold star. Badiou is one of the few French thinkers of his generation to refuse to be pulled in by the post-structuralist fashion that swept academia in the wake of the failure of the May 1968 events to transform society.

In recent years he has been involved with building a movement in defence of the sans papiers, immigrant workers who have repeatedly been attacked by the government and the far Right. Intellectually, he has faced down the demoralisation many on the Left read into the election of Nicholas Sarkozy as President, with a polemic that was prescient in its estimation of the weakness of the right-wing leader and the political class he emerged from.

Badiou has also been preoccupied with resolving the impasse of the radical Left in the age of neoliberalism. He was part of organising the sell-out London conference, The Idea Of Communism, which pulled over 1000, mainly young people in March last year. I’ve only read two of Badiou’s books and a handful of shorter pieces, so I cannot pretend to have a handle on his philosophical oeuvre.*

However, Badiou makes a very important point that the broader Left’s degeneration has in part been due to its attachment to politics that lie within the logic set by the state, either on the Stalinist or social democratic model. It is fitting to have a think about this when one considers the release of another little red book, the Red Book written by Treasury for the incoming ALP government, which has been leaked to the media in a censored (“redacted”) form. For anyone hoping that the current government will be socially progressive, it makes for chilling reading.

Michael Pusey has convincingly argued that the ALP’s recruitment to the neoliberal project was driven by senior public service bureaucrats in Canberra. The tales of Paul Keating being “captured by Treasury” in the 1980s were legion, an explanation for the ALP’s championing of policies identified most closely with the likes of Thatcher and Reagan on the world stage. As Badiou’s thesis would suggest, the Labor Party had a politics that led it to be captured by the state machine it was allegedly intending to use to champion the interests of working people.

Treasury’s Red Book message is crystal clear — that neoliberal reforms must remain central to the government’s actions. There are three main lines of argument in the document. First, that the Australian economy is doing so well that dangers of “wage inflation” need to be headed off at the pass. Second, that government deficit reduction must be prioritised. And third, that “market mechanisms” remain the best way to do… well, just about everything.

Much of the discussion of Labor’s social agenda is framed in terms of Gillard’s preferred “social inclusion” framework, which is formulated around maximising workforce participation. Read: push everyone to look for work, no matter how disadvantaged or disabled, by whatever means available. This is social inclusion as a mechanism for increased labour market competition and downward pressure on wages. Such policies, given that unemployment and underemployment have not returned to pre-GFC levels, let alone the lows of the true “full employment” era of the post-war boom, can only mean more hounding of the most vulnerable in our society.

The Treasury bureaucrats point to the growing storm clouds overseas that threaten to destabilise Australia’s economy. Yet while they argue that high levels of mortgage debt make Australia vulnerable to external shocks, and that the government holds very low levels of debt, they then warn that “delivering on the fiscal strategy [to cut public debt] is essential”. This concern is taken straight from the G20’s recent reconversion to cutting sovereign debt as the global priority. In other words, it’s OK for governments to spend like crazy to save banks, financial institutions and big business, but ordinary people will have to pay with cuts to public services and increases in taxation. Indeed, on the question of tax, the report argues that mobility of capital means there should be less taxation on capital income and more on “land, resources and consumption”. And there is talk of rejigging the tax system to pressure people back into the workforce by overcoming “disincentives” to work.

Finally, there is much made of markets as being the efficient centre of the universe. While “market failures” are acknowledged, this is only meant in the sense that governments should make the markets work better. Chiefly this is spelled out in terms of market mechanisms to cut emissions, which are lauded as “the most cost-effective way to achieve carbon abatement”. Which class they are cost-effective for is a question whose answer is assumed rather than stated because, well, why would it have to be spelled out?

Interestingly, the Red Book recognises that the problems the major parties faced during the election were driven by “manifestations of the costs of structural adjustment, both perceived and actual”. But it warns that:

Many of the policy options to deal with structural adjustment will have cost of living implications, which, in itself, will be an impediment to reform. It is our firm view, however, that it is optimal for markets to be allowed to operate freely, letting the true costs flow through to consumers, with an appropriate safety net provided for disadvantaged groups.

If we were to believe Kevin Rudd when he penned his infamous Monthly essay, the GFC marked the death of the neoliberal project. Neoliberalism is deeply unpopular in the community and Tony Abbott’s policy schizophrenia suggests that not even the favoured party of Australian capitalism can run on an openly economic rationalist program anymore. But as Treasury’s little Red Book shows, the logic of market capitalism stops for no government, no matter how much of a “new paradigm” it seeks to sell.

* Badiou’s analysis, in The Communist Hypothesis, of what he sees as the radical edge of Mao’s Cultural Revolution jars violently with my understanding of what happened. It strikes me he has tried to renovate socialist politics from within the logic of Maoism, yet I would reject his premise that Maoism was about overturning capitalism at all. Rather, the Communist Party had long before 1949 dropped any substantive commitment to workers’ power as the basis for socialism. Badiou’s response to Slavoj Zizek on the nature of Maoism in the appendix is unconvincing.