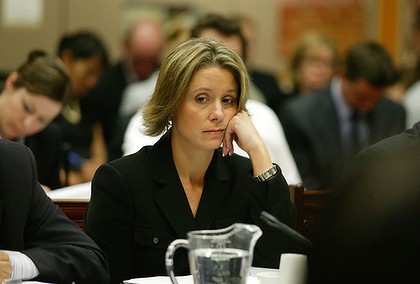 It is now received wisdom that the NSW branch of the ALP is responsible for everything that is wrong with Labor politics in Australia. Even smug Victorian state ministers have felt comfortable parroting this line publicly. In particular, the argument goes, the NSW Right are a bunch of unaccountable thugs who singlehandedly destroyed what should have been a cakewalk federal election win and who are the last vestige of that familiar dinosaur, “union power”. They will also be responsible for the state party’s near-certain electoral routing next March because they humiliated Morris Iemma when he attempted to deliver power privatisation.

There is a left-wing variant of the argument, often heard in Greens circles, that the ALP has moved so far Right it is no different from the Liberal Party. This is often tied up with either a naïve hope that the Greens can leapfrog the ALP to become the main party of the centre-Left, or despondent mutterings that a likely Liberal landslide will reflect the deep conservatism of the working-class western suburbs of Sydney where the Greens have struggled, or both.

Yet the NSW Labor Party and its base are much more contradictory phenomena than such accounts allow. On the Right, the frenzy to see the end of the factional, union-dominated ALP machine is really mainly about breaking the ALP’s last links to working class interests. For some Greens it reflects an underestimation of the continuing strength and complexity of Labor’s ties to its base. Examining the contradictions in some more detail must be part of understanding the roots of Labor’s crisis in the state (and nationally).

A good starting point is last week’s debate between over workplace safety laws. When Kristina Keneally announced she would not go along with Julia Gillard’s harmonisation of the laws it was called a sign that “the prime minister is putting the nation first, [but] the premier is putting the unions first”. Yet as federal Greens MP Adam Bandt pointed out, uniform laws “should not come at the expense of existing protections”. Keneally, a practicing Catholic also recently delivered an impassioned defence (pdf) of new same-sex adoption laws, despite Cardinal George Pell’s opposition, and backed the ordination of women. These positions say something about Keneally personally, but they say more about how Labor’s degeneration still leaves room for appeal to its core constituencies, both in the working class and what remains of progressive movements.

A secular hollowing out

One of the great strengths of Rodney Cavalier’s new book, Power Crisis, is that he relates the NSW party’s decline to its separation from these traditional sources of support. He links it to both political shifts (the abandonment of traditional social democratic / democratic socialist policies in favour of economic rationalism from the late 1970s, accelerated by the 1989 collapse of Communism) and the growing organisational autonomy from their constituency of MPs, advisers and apparatchiks (who Cavalier identifies as a new, self-interested “political class”, incorrectly invoking Marx as he goes). This was the problem, writ large, in Iemma’s drive to privatise electricity. The parliamentary wing simply chose to ignore a key plank of Labor belief and policy (state ownership of essential utilities) in the pursuit of keeping ratings agencies happy.

Unlike many modern commentators Cavalier details how historically the party put in place checks and balances to prevent its MPs from simply detaching themselves from the will of the membership. He credits the post-WWII success of the NSW party to these, including its avoidance of a debilitating DLP split. Among these mechanisms is the pledge that MPs sign to respect party conference decisions as final, one that Iemma effectively flouted when he decided to proceed with privatisation despite a crushing defeat on the conference floor. In its heyday, the NSW ALP was the most powerful section of the party in the economically most important state. It consistently achieved primary votes close to 50 percent and held onto core working class votes election after election. Its networks from local council level up won it deep allegiances. Yet today the party is a shadow of itself in those times.

Cavalier is even-handed in his portrayal of the protagonists in the battle, but scathing of the degeneration of the ALP. He points to a massive decline in NSW membership to around 15,000 — over 8000 of them on a concessional rate — reflected in 101 branches closed down between 1999-2009. But he also sees part of the problem as the malign influence of officials of affiliated unions, barely accountable to their members and representing less than 10 percent of the state’s working age population. He calls for a more thorough excision of those unions’ direct influence and a reinvigoration of the democratic power of ALP branches within the party as a way of reining in the power of the political class.

The decline he describes is evident enough, but in the course of his polemic he also argues:

Public funding of election campaigns and donations from the corporate sector have rendered unimportant the contributions of cash and energy from unions and party members. Electors are reached by direct mail and electronic mail. The letterbox delivery of the candidate’s pamphlet is decidedly old hat. Local campaigns are not run locally and are local only in the sense that any deviations from the central message are authorised to the last comma. The organisation of the modern political party does not require a presence below, not even at election times — except perhaps for the odd photo opportunity (p. 184).

At another point he suggests that full public funding of elections could complete such a separation between the parliamentary wing and its base — surely a word of warning to those on the Left who think this would somehow eliminate the problems of powerful interests distorting party policy.

I would contend that in portraying the situation in this way Cavalier both overplays the extent of the ALP’s crisis and simultaneously underestimates how fundamental is the source of the party’s problems. It is to the specifics of those issues that I will turn next.

Next: NSW Labor — Degeneration versus resilience