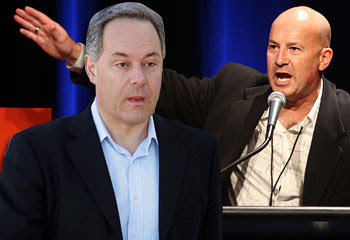 The erosion of the ALP’s long grip on the working class vote in NSW has been spectacular, reflecting the long-term processes that Left Flank has repeatedly drawn attention to. Yet it can still rely on a significant party organisation, and even more so the active endorsement (or at least passive acceptance) of trade union leaders, organisers and delegates to carry its base.

By focusing almost exclusively on the inner-party struggle in Power Crisis, Rodney Cavalier ends up acknowledging but downplaying the importance of how workers in unions helped deliver large ALP votes in NSW in the 2007 state and federal elections, but also how their alienation underpinned Iemma’s destruction and Labor’s electoral collapse in the years since. Iemma won in 2007 in large part because his campaign dovetailed with the powerful Your Rights At Work movement in its portrayal of the Liberal opposition as privileged, nasty, pro-Workchoices Tories. Power privatisation, on the other hand, like Rudd’s later abandonment of climate action, represented a deep betrayal of the hope vested in a party that had already been struggling to prove its relevance to traditional supporters. In both cases Labor “blew its last chance”.

The fact that Unions NSW demobilised work stoppages and demonstrations against privatisation in favour of an ALP-centred campaign around the conference and backroom deal-making is left unanalysed by Cavalier — yet this is a key reason for the eventual messy degeneration into factional intrigue that finally replaced Iemma and Costa with another crew of privatisers. Had Unions NSW leader John Robertson opted to keep the mass movement going he could have delivered a more clear-cut victory for the overwhelming public sentiment against the sale. Instead, he ended up trying to sell prisons from his Legislative Council seat as Prisons Minister. The extra-parliamentary movement (including the work of the Greens and many rank-and-file ALP members, such as in the Power To The People activist network) is given short shrift in Cavalier’s account, yet it held the key for a more profound shift in the situation because it points to a different mode of politics to that which dominates the ALP today.

Cavalier rightly argues that many ALP MPs and staffers dream of a party free of its grassroots. But the power crisis proved the continuing importance of the party’s union and membership base, despite a stream of premature obituaries. It is one thing to win elections through appeals via the media, another to maintain a stable base inside society. The professionalization of politics, as well as funding from the state and big business, have eroded those connections to supporters but they have not destroyed them. The erosion explains the destabilisation of the Labor Party. But it doesn’t explain the party’s survival.

Furthermore, when we look at the opposite side of the equation — the trade union officialdom, ordinary ALP members and the working class more generally — there remains a need for political representation, however distorted and inadequate a vehicle the ALP is for such projects. The power crisis shows the limited but important power that the ALP’s working class base continues to exert on the party’s actions — and the willingness of the union officials, who claim ownership of the party, to save the party by destroying it.

Cavalier is also too quick too write off the unions as socially unrepresentative. They remain the largest voluntary organisations in the country despite decades of retreat and contraction. They also mostly retain democratic structures well in advance of what the ALP itself offers, let alone the limited influence obtained by voting in parliamentary elections. It was the unions, rather than Kevin Rudd’s media genius, that broke the back of the Howard government. Yes the officialdom is a conservative layer that mediates between labour and capital rather than fully representing the interests of its members, but it has also started to adapt to the shifts to the Left in the polity while ALP politicians remain transfixed by neoliberal orthodoxy.

A complex situation for the Left

Unlike Cavalier, I am not interested in reinvigorating the ALP. But I am arguing that despite the hollowing out of the party in the last three decades some kind of partial reinvigoration still remains a possibility, one that the Left cannot simply wish away. In one sense, Keneally’s recent performance represents a rearguard action to hang on to core supporters in a dark hour. But a bigger political shift along those lines could occur from opposition, especially if conservatives pursue slash and burn austerity measures as in Europe, and even more so if there is a revival of resistance in the streets and workplaces. Even the moribund and reviled UK Labour Party has seen a surge in membership since the conservatives won power there. While capitalism continues to make lives miserable and ordinary people don’t feel that ending the system is possible, ideas of working within the system for reforms will remain dominant — and the ALP remains the vehicle, par excellence, for claiming to fulfil that reformist ambition.

The adaptability of NSW Labor has also been evident in its ability to squeeze the Greens vote in recent years, relative to that in other states. While some inside and outside the Greens want to blame this on the NSW Greens apparently being “too left-wing”, Geoff Robinson has used Australian Election Study data to show that it is NSW Labor’s ability to project itself as more left-wing than other state ALPs can that may better explain the Greens’ difficulties in the state. In the absence of a credible alternative, resistance from below could well be channelled — at least temporarily — towards rebadged ALP politics.

Tony Harris shows in Basket Weavers And True Believers, his fascinating history of the inner-west Sydney ALP branches of the 1970s and 80s, that even in a period of powerful extra-parliamentary social movements the ALP could attract many idealistic activists into trying to revive the party. That their radicalism was sucked into soul-destroying factional manoeuvres, branch-stacking and confused local council politics speaks to the conservatising effects of ALP strategy for social change.

As I have argued previously, it is when the Greens have been able to present a positive alternative to Labor’s rightward march that they have been able to break key sections of its support base. This has been weaker in terms of an orientation on unionised workers, despite some inspiring exceptions (e.g. Adam Bandt’s campaigns, or the NSW Greens’ orientation on teacher militancy and anti-privatisation campaigns). In large part this is because Greens ideology accepts post-class conceptions of social structure and change, with inequality and injustice seen as due to bad policy (or “values”) rather than as the product of relations of social domination. In this sense their politics closely resemble those of the ALP Left of a past era, with no substantive critique of social power or its expression through the state.

For the radical Left this is a complex situation: An ALP that still retains the allegiance of key sections of the working class, a Greens party articulating a more radical project but essentially within the same reformist strategic frame yet without a conscious class element, and a global systemic crisis that is driving ruling class attacks but also resistance — as the Greek and French struggles have shown in such an inspiring fashion. This blog has been taken to task (in a friendly way) for developing such a critique without there being a vehicle for the politics advocated here. But I’d contend there’s no shortcut to us grappling with these basic issues of class, power and state in a way that the Left, in retreat for three decades, has pulled back from doing.

In the case of the ALP, which still dominates the Australian working class politically, we need to be clear whether its degeneration is a product simply of the kinds of processes Cavalier highlights or whether there is something fundamentally problematic with positing social change as a strategy to be carried out within the logic and structures of existing relations of domination. While there has been something of a revival of Left discourse in recent years, most of it has eschewed such categories in favour of ideological explanations, or prettified versions of Labor’s neoliberal turn.

A decent Greens vote in March 2011, however important that is, will not be sufficient to break the dead weight of such ideas by itself. This is especially likely as Barry O’Farrell has developed himself as something of a David Cameron like figure, an apparently moderate conservative able to stake out the occasional progressive position to distract from the Liberals’ class project. Using the moral panic over the condition Labor will have left the state in, ably abetted by a pliant media, they are likely to see this as a once in a lifetime opportunity to violently reshape NSW and finally break the power of the public sector unions, something the ALP couldn’t do. Staking out some clear positions now on what kind of politics can play a useful role in such circumstances is an unavoidable part of building a new Left. If we don’t then the ALP will be back selling its snake oil in opposition, undoubtedly in a new flavour to make it seem more palatable, but with us not sure how to deal with it.