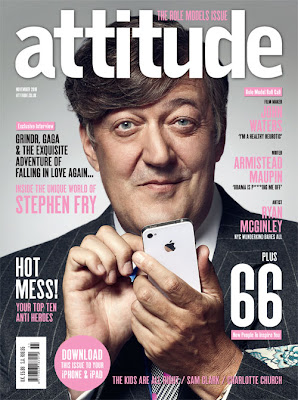 Stephen Fry has quit Twitter. Some are saying that his tweet, “So some fucking paper misquotes a humorous interview I gave, which itself misquoted me and now I’m the Antichrist. I give up.” and his subsequent, “Bye bye” is a “hissy fit”.

Maybe. We’re all entitled to bad behaviour. I also wonder if it is a reaction occurring during a manic phase (Fry is quite open about his bipolar) when feeling piled upon. The only person who would know that would be him, and his doctor, but I have to say that’s how it comes across to me.

So, what was he supposedly misquoted in saying?

I think most straight men feel they disgust women. They find it difficult to believe that women are as interested in sex as they are. For good reason. If women liked sex as much as men there would be straight cruising areas in the way there are gay cruising areas.

I feel sorry for straight men. The only reason women will have sex with them is that sex is the price they are willing to pay for a relationship with a man, which is what they want. They want a boyfriend and then they want commitment.

Of course a lot of women will deny this and say, “Oh, no, but I love sex, I love it!” But do they go around having it the way that gay men do?

Gay men are the perfect acid test. If they want to get their rocks off, they go into a park where they know they can do it.

I shouldn’t need to tell you that Fry is incorrect in his comments about womens’ sexuality. Plenty of women enjoy sex, plenty don’t. Numerous women find anonymous encounters satisfying and there are those who wouldn’t dream of having sex unless they were in a monogamous relationship.  The point is sexuality, whatever your gender identity, is complex and cannot be classified in any specific way.

Fry has copped a hell of a lot of criticism for this and I don’t think all of it is unwarranted, particularly since he has made these kinds of comments before. Even if it was intended to be taken in jest I think it missteps sufficiently for it to be considered sexist.

Do I think he should be vilified like he has been? No.  At most he’s (allegedly) tried to make a joke and in doing so has repeated a trope that is rehashed ad nauseum  by people who are ignorant of basic principles of equality.

I’m a feminist. Call me a bad feminist if you like, but I can’t agree that this makes him a terrible person overall or deserving of hatred. The comments are not forgivable, but neither are comments like this from Germaine Greer:

Stephen Fry is clearly under a delusion that he is an authority on female sexuality. Well, if he thinks that women are not interested in genital encounters with total strangers then he is absolutely right. But to conclude that we are therefore uninterested in sex is madness.

It is true that men have an interest in a kind of sex which women find infinitely depressing, and it’s true that women really don’t want to hang around toilets hoping that someone will come along and play with their bits. That is not what passion is about for us and we would be placing ourselves in mortal danger if it was.

Women have an idea of passion which men like Stephen can’t even begin to imagine. What women yearn for is intimacy. The fact that for women sex is an integral part of closeness doesn’t mean we are any less interested in it.

Responding to a generalisation about womens’ sexuality with another sweeping comment regarding the same, and including men for good measure is not how you fight sexism.

You fight sexism by educating, not seeing who can scream the loudest at the offender. No one is perfect, we may like to believe the people we admire are, but they’re not.  Stephen Fry is not excluded from that, despite the adoration many have for him.

Stephen Fry is a ridiculously intelligent man, but intelligence does not equate to wisdom or common sense. Am I disappointed that he made such comments? Hell yes. I won’t write him off for it, but my admiration has been taken down a few notches. That is what happens when we place someone on a pedestal. That is when disappointment hits hardest.