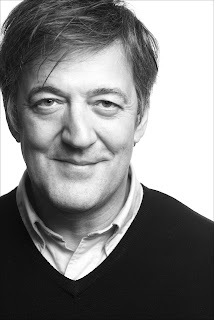 As I wrote previously, Stephen Fry was under fire earlier this week for making comments regarding women’s sexuality. Subjected to condemnation, he left Twitter and nothing further was heard from him. Since then he has published a piece on his website, explaining himself:

I suppose the keenest disappointment I feel about the past week and the almost incredible weirdnesses it has brought in its train is the idea that there are people out there who actually swallow the notion that I am so stupid as to believe that women don’t enjoy sex. That I not only believe it but that I am dense, dotty and suicidally deluded enough to make a public declaration of such a crazed belief.

As a gay man, female sexuality is patently a closed book to me. I had fondly imagined that in a free and open society one might be allowed to play with such ideas in a reasonable spirit of debate, but it seems not. It seems that such a conversation was offensive, ignorant, arrogant … god knows what else. Ill-judged it most certainly was.

Theoretically Fry has enough media nous to know when he should keep his mouth shut, but in reality he’s demonstrated that he is as proficient as the rest of us in exercising poor judgement.

In my previous post I said regardless of its intent the comment was sexist and crossed the line. I still believe so. Fry states that he had a brief interview with Attitude in which he “took a thought for a walk” and in doing so repeated a myth that is oft believed to be unassailably correct by those who wish to establish that women are lesser than men. He never intended it to be taken as a serious opinion yet it has been reported in that manner.

It should also be noted that Fry is not apologising. Explaining himself in a terribly British way, yes, apologising, no.

I have conflicting feelings on this. On one hand I believe he should apologise as his comments, no matter how they were intended, are offensive to woman; on the other I don’t think he, or anyone for that matter, should apologise in situations like this if they don’t genuinely feel remorse. Apologies that are not legitimately felt do more harm than good to all parties.

What does strike me about his piece is the apparent shock that people from around the world take notice of what he says. Given his heightened awareness of the internet and social media, it is delusive of him to claim surprise at the impact and spread of his comments.

Given the tone of his writing I have no doubt that in his mind that is the end of the matter. It will likely be mentioned to him in future (non-print) interviews, and many people will hold it up as a reason to not interest themselves in him any further.

Fry’s non-apology will clear things up for some, but cause others to remain unconvinced. Personally, it doesn’t restore my previous opinion of him but is demonstrable of how separate to the world he sees himself. No doubt many celebrities do this consciously so they don’t feel besieged by everything that is said about them, but Fry seems to have taken it to a level which appears to impact on his common sense.

I have one thing I’d like to add regarding my previous post. My comments about bipolar were not a diagnosis, but an idea of what might be going on in light of a seemingly sudden, pique-filled, departure from twitter. Given my own experience with the illness I feel a certain empathy for emotionally charged reactions as that. But I said it for potential context given how his reaction took many by surprise, rather than to announce that that is why he dropped out of sight.

*A friend of mine read that and started laughing, declaring it “so bad it is good”. I prefer to think it’s so bad it’s bad…