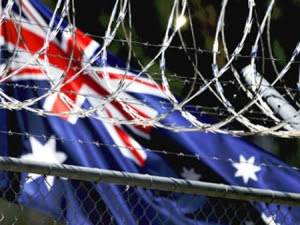 ABC’s The Drum Unleashed has published my analysis of refugee policy today. I take on Robert Manne’s recent surrender to the inevitability of coercive state policy towards asylum seekers as a fact of political life:

Recognising that refugee and immigration policies are a function of domestic politics and not a technical attempt to deal with the realities of people movements helps free us from many of the interminable debates that have clouded the issue. It helps cut through the contradictions and hypocrisies of politicians when they claim to be securing our wellbeing with their harsh actions against others. It also exposes the elephant in the room, the social and economic insecurity that leaves people open to seeking scapegoats for their problems. The invocation of worries about borders, ethnic tensions, terrorism and economic competition are so powerful because they have long been the stock-in-trade of political and economic elites seeking to define and enforce a common national identity and thereby pacify social divisions caused by inequalities of wealth and power. White Australia, for example, was a key plank of convincing militant trade unions to worry more about the potential threat of foreign workers than the reality of avaricious local employers.

It is in this context that we can see the dangers of the advice proferred by Robert Manne. Firstly it accepts at face value the idea that refugee-bashing is still as effective a political tool as it was in 2001. Yet the election of Kevin Rudd despite Howard’s continued use of dog-whistle politics was a clear sign that things have moved on. Here Manne is giving in to the same brilliant strategy that saw Julia Gillard legitimate every anti-migrant slogan Tony Abbott could conjure up — and almost lose the election in the process. Secondly, Manne misses how the coercive actions of the state reinforce ill feeling towards refugees. By treating them as “illegal” (even if formally they may not be), the government creates the perception that they must be doing something wrong and that they deserve cruel and unusual treatment. Manne’s preferred strategy will only entrench the very “irrational” ideas he opposes by having them legitimated through state practice.

IN ADDITION: @oz_f has kindly brought my attention to Greens Senator Sarah Hanson-Young’s latest intervention, which happened just after I’d filed the article. She has called for a higher but fixed cap on refugee intake, playing directly into the debate over numbers. This can only be a setback for all those opposed to mistreatment of asylum seekers, but not surprising from a politician who referred to cutting business migration as “trimming fat”.