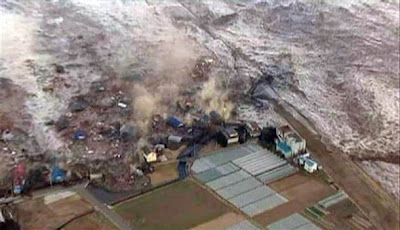 The scale of the human death and suffering from Japan’s earthquake and Tsunami has been staggering. While not on the scale of human loss suffered during similar disasters that have hit poorer parts of the world, to see such rapid devastation of modern, solidly built roads, harbours and towns was almost too dramatic to believe.
As I post this we face the possibility of a major nuclear disaster, especially since an explosion rocked the Fukushima Daiichi nuclear power plant near the town of Okuma, just 250km from Tokyo, one of our planet’s greatest metropolitan conurbations.
It’s just the latest event to remind us of humanity’s contradictory relationship with the rest of nature. This, from 1883’s Dialectics of Nature by Frederick Engels, seems strikingly modern and apposite*:
Let us not, however, flatter ourselves overmuch on account of our human conquest over nature. For each such conquest takes its revenge on us. Each of them, it is true, has in the first place the consequences on which we counted, but in the second and third places it has quite different, unforeseen effects which only too often cancel out the first. The people who, in Mesopotamia, Greece, Asia Minor, and elsewhere, destroyed the forests to obtain cultivable land, never dreamed that they were laying the basis for the present devastated condition of these countries, by removing along with the forests the collecting centres and reservoirs of moisture. When, on the southern slopes of the mountains, the Italians of the Alps used up the pine forests so carefully cherished on the northern slopes, they had no inkling that by doing so they were cutting at the roots of the dairy industry in their region; they had still less inkling that they were thereby depriving their mountain springs of water for the greater part of the year, with the effect that these would be able to pour still more furious flood torrents on the plains during the rainy seasons. Those who spread the potato in Europe were not aware that they were at the same time spreading the disease of scrofula. Thus at every step we are reminded that we by no means rule over nature like a conqueror over a foreign people, like someone standing outside nature — but that we, with flesh, blood, and brain, belong to nature, and exist in its midst, and that all our mastery of it consists in the fact that we have the advantage over all other beings of being able to know and correctly apply its laws.
*Thanks to Alex Callinicos for reminding us of this passage