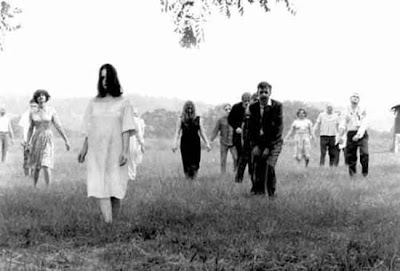 When watching the last few episodes of US cable TV series The Walking Dead, it struck me that the title has a double meaning, that Sheriff Rick and the other survivors of the zombie apocalypse are also among the dead who roam the planet’s surface. They’re still animated to do all the usual human things — eat, sleep, play, laugh, cry, get jealous, fight with each other, screw up — but really only kept going by the residues of the past and not any sense of a goal or a future. The edginess in the best episodes emerges from watching as human pettiness overtakes the survivors time after time, leaving them ever more vulnerable to being eaten alive; destroying each other over very little indeed.

The Australian Labor Party’s rolling crisis, playing itself out in an apocalyptic electoral drubbing in Queensland on Saturday, has many of the same features. The greater the portents of impending doom and destruction, the more the protagonists seize at irrelevancies to explain their situation and inform their actions. The ALP is fast becoming Australia’s political walking dead.

The same kind of “going through the motions” that characterises the TV series infected commentary in the lead-up to Saturday: That the LNP lead would narrow, that people would wake up to Campbell Newman/Clive Palmer’s real agenda, that the distribution of votes would save Labor seats, that the settling of the federal leadership stoush would stabilise things, etc, etc. And in the short time since the result the spin to explain this historic defeat has been similarly disorienting: That it was an election purely on state issues, that when Queensland swings it swings hard, that this was simply an “it’s time” election, and that the hated privatisations weren’t the problem, it was how they were “communicated”. Perhaps worst of all is the notion that Queenslanders are mostly reactionary rednecks and deserve what they get.

A much more convincing response has been to point to Labor’s disappointing and often appalling record in government in Queensland over the past 23 years, attacking its traditional supporters among workers, the poor, women and Indigenous people. In this reading Bligh’s surprise privatisations after 2009 are both the catalyst for Labor’s unpopularity and the reason that its union base largely couldn’t be mobilised to support the government any longer.

However, the sheer depth to which Labor’s primary vote has sunk — and not just in Queensland — requires more explanation in terms of the decline of the social relevance of the party’s traditional base in the trade union bureaucracy, and the exhaustion of neoliberal managerialism as an alternative to the traditional Laborist program. This result is worse than what happened in the Great Depression or in the context of an economic crisis blamed on the Whitlam government in 1974. Yet it has happened in the absence of a recession. It’s a pretty unique moment in the last 100 years.

It was helpful, then, that Bob Hawke inadvertently deigned to give us the clearest insight into the ALP’s historic problems when last week he cheerily retold a story about meeting Japanese businesspeople in the 1980s, assuring them that his government had made sure the unions would be tame for them if they wanted to invest in Australia. Back then the union bureaucracy was instrumental in inflicting a major defeat on the confidence of workers to challenge the priorities of capital, through the Accord and its offspring. Today the unions are simply too weak to play that kind of role. In that sense, before today’s zombie social democracy, the Hawke and Keating governments were more vampire-like, sucking the working class dry for big business. All that’s left is the Twilight version of Laborism — pallid and enervated.

All this has profound implications for the federal government. The belief among some that Gillard passing legislation will win over voters is entirely misplaced. At no point was Bligh stopped from getting her agenda through parliament, but that was precisely the problem. Similarly, if it is going to be an effective manager of Australian capitalism, the ALP can hardly allow internal democracy to get in its way. And no one even dares think that the party could reverse its decades long commitment to neoliberalism so as to start to tip the balance against the “1 percent”. You can already see the silliness to which Labor hardheads descend in trying to tap into some kind of class politics with Paul Howes’ attack on mining bosses, in which he pines for “philanthropic” US billionaires like Gates and Soros to take their place. This from a union official and party operative who has distinguished himself through fealty to the bosses.

My not-very-brave prediction: For the Labor Party things will keep getting worse long before they get any better.

A key factor for the Greens is that — whatever anti-ALP rhetoric they employ while campaigning — they also provide explicit political support to three right-wing Labor governments (in the ACT, Tasmania, and federally). During the ALP leadership crisis this went as far as Bob Brown taking sides against Rudd because Gillard was more accommodating to backroom dealing. Over the mining tax Brown’s position has essentially been to pass the tax no matter how bad it is, because it’s better than what Abbott would do, a position I understand has caused concern within the party.

Such a strategy is at one level parasitic, sapping Labor’s strength relative to the Greens. But it also limits how much the Greens can win Labor’s disaffected base  (and other voters) to an independent set of politics. Those who want a political alternative to the ALP are left having to look elsewhere. For example, while the Greens at times spoke against the privatisations that were emblematic of the ALP’s failure, this was always a peripheral part of their pitch. Indeed, their economics policy carried this charming equivocation:

The Queensland Greens do not believe that governments have all the answers for tackling economic crises and value the hard work, innovation and entrepreneurship which form the foundation of a modern, liberal society with an economy which strikes the right balance between market forces and the public interest.

It is notable that Bob Katter offers a clearer argument against the neoliberal consensus of the major parties than the Queensland Greens do, and early analysis suggests that a large chunk of his party’s vote has come from the ALP and not the mainstream Right parties. That veteran Greens activist and theoretician Drew Hutton seriously considered suing Clive Palmer for defamation over nutty claims that he was part of a CIA plot suggests how little perspective there is inside the Greens about the nature of the crisis.

Labor has been the main party of the Australian Left, and almost totally dominant in electoral terms, for most of the last 110 years. That’s a reality we have to face honestly, but which we are today seeing unravel as never before. For a few years it appeared that this unraveling could be absorbed by the rapid electoral rise of the Greens. But now the Greens’ problems suggest they have are being caught up in the same political crisis.

Because the Greens have been a pole of attraction to the Left of the ALP, this is likely to have far-reaching but contradictory effects. The election result overall could cause demoralisation, but it is also likely to further break down the restraining role the official Left parties can exert on any re-emergence of social resistance, especially if Australia is hit by more serious economic problems and/or there is a further rise in employer militancy. We can see from Greece how quickly this could accelerate the decomposition of longstanding electoral configurations.

Workers’ struggle, whether narrowly economic or more explicitly political, is an essential precondition of any political alternative being built to the current mess of Left politics. But in many ways that’s a banal argument, repeated endlessly by the radical Left in stock slogans about fightbacks and union revivals, as if such phrases could resurrect a bygone era of struggle. Such an argument misses the centrality of politics, of developing “a concrete analysis of the concrete situation”. And the essential starting point for any such analysis is recognizing the historic scale and specificity of the crisis spreading through official politics like a runaway zombie plague.

Apologies to John Passant for blatant misuse of his term “zombie social democracy”.