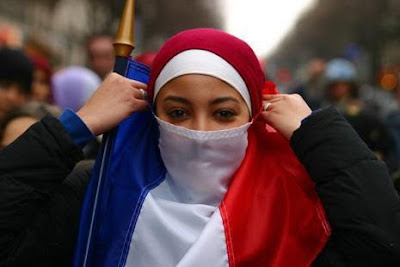 Pushing their way through the clamour and mush regarding immigration and “the boats” have been murmurs of moves to ban the public wearing of the full Islamic veil in Australia. The issue has been raised on both the Left and the Right, with people taking a lead from Europe.

France’s lower house has just passed a ban on the niqab and burka in public places, after already banning the wearing of any “ostensible” religious object in public schools in 2004. Laws are on the table in Belgium, and consideration of the same is occurring in the Netherlands.

As with the invasion of Afghanistan, the liberation of women is being used as ideological cover for racism and the public denigration of Islam. What has been disturbing for those on the progressive side of politics is the willingness of some feminists and secularists to see this as a good thing.

And a particular shock on a personal level: On this matter I stand with Miranda Devine.

The right and the left

Liberal Senator Cory Bernardi issued the most recent high profile call for a ban, labelling the burka “un-Australian”. He argued “they [people of Muslim faith] should come here for a better life based on the freedoms and values that have built our great nation”. I guess in Bernardi’s mind freedom involves the intervention of the state to mandate certain dress codes in public places. Freedom for women therefore involves intervention and regulation by men like him.

Fairfax radio’s Michael Smith alternatively argues that they should be banned for security reasons, because criminals could wear them to prevent being identified. The National Retailers Association has chimed in to agree.

Far from the Right of the debate, Canberra Times journalist Virginia Haussegger wrote in June 2009 of her “sighting” at the Canberra Centre of a woman wearing a niqab:

The sight of this hideously shrouded figure in an Australian shopping mall is confronting and offensive. And it makes me angry, very angry. I wanted to stop and ask why she had such disrespect for herself and our culture. … Wearing the burka – or niqab – in Australia is an aggressive way of saying “I will not integrate into your society, and I care nothing for the cultural mores and social traditions of this country”.

And she goes on to argue effectively the same thing the Right do:

The fact that Western, democratic governments allow this garb to be worn in secular societies is evidence that “gender equality” and the “liberation of women” are still just vague aspirations, mouthed with weak intent. Unless of course you’re French.

Others, including some Muslim women, have argued that a feminist case for banning the burka can be made (see here and here). They argue the burka erases a women’s identity, and that those who do not want it banned on the progressive side of politics are simply cowed by political correctness.

Yet what seems to elude these commentators from both the Left and Right, all of whom use the moral force of women’s liberation to bolster their arguments, is that such an effort would likely result in exactly the opposite of liberation.

For that small proportion of Muslim women who may not be choosing to wear religious clothing freely, freedom would be the “right” to never leave the house and an even less diminished “public” life.

Devine argues it well in her column, leaving aside the final few lines, as does UK author and activist Judith Orr in her letter to The Guardian this week:

If there are women forced to wear the veil by a male family member, how will the state forcing them not to wear it help? Such enforcement can never be progressive. The result will be that, far from being liberated, such women may become completely excluded from public life.

It is not to say this is not a complicated issue, and it is not to argue that Islamic women are liberated/not oppressed. It is to say the debate is so saturated with hypocrisy, and that it is taking place in such a narrow way that there is effectively no progressive and articulate voice allowed.

Not another hijab row

A few years ago I attended a conference in Sydney organised by Christina Ho and Tanja Dreher at UTS titled “Not another hijab row”. This conference sought to provide a space for Muslim women and non-Muslim women to discuss and debate issues that sit at the intersection of gender, race and religion.

The constant narrowing of representation of Muslim women to the issue of religious clothing, or alternatively Sharia law, creates an atmosphere of public scrutiny where Muslim women are objects to be discussed rather than equal citizens with views and opinions on many matters. When Muslim women, and in particular young Muslim women, are asked for their views it is often only on these same narrow matters. And such views are always held in suspicion: indeed, how can you trust someone who is oppressed by Islam to consider their own circumstances independently?

The recent, alternative, high profile representation of Muslim women has been of a group of people just like us. I am sure that the writers and producers of Sex and the City 2 thought they were making a great feminist argument when they depicted Muslim women as just like “Western” women in every way (just simply “kept” by men behind their face veils). And clearly, if the movie is to be believed, liberation and individual expression will come at the hands of designer clothes and self-indulgent self help books.

Perhaps this is the liberation hoped for by Bernardi, and I imagine Devine, but this is equally an insult to Muslim women as they are silenced by consumerism. There appears to me there is no more liberation in Calvin Klein jeans ads than in the banning of the Burka.